A lightly speculative story of a refugee family, told with unflinching empathy 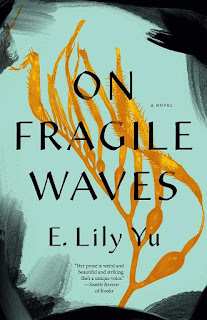 I'm excited by Erewhon Press, the new independent SFF publisher on the block whose offerings almost all seem tailor made to hit my "must read" list. One of the earliest stories I got excited for in their catalogue was On Fragile Waves, a intriguing looking tale of refugee migration from author E. Lily Yu. Originally slated for a 2020 release, On Fragile Waves was pushed back to early this year, and now this prettiest and bleakest of stories is finally coming into the world.

On Fragile Waves is a refugee story, centred around young girl Firuzeh Daizangi, along with her younger brother Nour, and her parents (generally referred to as Abay and Atay, but named Bahar and Omid), as they flee Afghanistan and attempt to reach Australia, falling foul of the country's inhumane policy towards refugees in the process, before finally trying to begin making a new life for themselves despite their still-uncertain status in Melbourne. Firuzeh's story is one impacted by both the deep traumas of her refugee experience, particularly during the boat trip from Indonesia and her family's subsequent stay in Nauru, and the more mundane challenges of being a loved but often overlooked, or overburdened daughter, with an irritating, spoiled younger brother and parents trying to adapt to challenges of their own.

The other defining aspect of Firuzeh's experience is the book's speculative element -although it's important to note that readers approaching On Fragile Waves solely because of its speculative content are likely to come away disappointed. During the family's journey to Australia, Firuzeh meets another girl, Nasima, whose is also fleeing the country with her parents. Self-important, status conscious, and confident about her new life, Nasima isn't a particularly pleasant friend to Firuzeh, but she nevertheless offers continuity and connection which is cut tragically short during the boat ride the two share from Indonesia. Afterwards, Firuzeh begins to see and confide in Nasima's ghost to make sense of developments in her own life, and even to begin to imagine (or exert?) some tenuous control over certain circumstances. The connection between the two girls, despite their brief friendship and diverging paths, underscores the fragility which forms the book's core (the clue is in the title). Everything that separates Firuzeh's life from Nasima's death is built on fragile foundations, and one moment of luck - and Firuzeh and her family have to build their lives within a system that never lets them forget it.

On Fragile Waves is mostly told from Firuzeh's perspective, in sparse but often beautiful prose, but it diverts often into different perspectives and voices, building up a picture of the people around them. These range from the small-minded racist guard whose chapter only serves to highlight the difference between his internal monologue about his actions and their external impacts on the refugees he holds power over, to the language tutor who volunteers with the family, to Nasima's older brothers, already in Australia and waiting for the rest of their family. Each of these chapters takes on a different tone and voice, and the effect is a novel whose prose is a fundamental part of its characters. There are also chapters where the narration becomes significantly more fragmented and poetic, including an opening which effectively summarises Firuzeh's first six years and introduces, in just a few lines, the interplay between threat and beauty in which the rest of the novel takes place, and later on, some of her dreams are told in the same style. One or two stylistic choices aside (the lack of quoted speech always takes a little while for me to get used to), On Fragile Waves isn't a demanding read where its prose style is concerned, but it is a book that encourages its reader to pay attention to style and language to get the most out of it. There's also a distinct separation between the first half of the book, which covers the family's journey from Afghanistan to Nauru and their time there, and the second half in Australia: it feels like because we see Melbourne through the eyes of an older Firuzeh, there's more direct representation of the interpersonal complexity, as well as a greater understanding of her parents' trauma and how it continues to affect them. In contrast, the family's time in Nauru contains more depictions of overt brutality and horror, but some experiences - like Firuzeh's brief befriending of a camp sex worker, and an attack perpetrated against her mother for being late for a bus - are beyond her capacity to process in the same way as the audience does, leaving us to piece together the broader dynamics from her incomplete perspective.

Yu - who is from the USA - has noted that a decade of research went into On Fragile Waves, and there's even a chapter with a self-deprecating self-insert character (a US researcher who doesn't know any of the right questions to ask of the refugees she is interviewing, and has to be set on the right path by a more experienced Australian woman.) The question of authenticity is, on one level, hard to escape from - is Yu the right person to be writing this refugee story? Does this capture the reality of the experience? - but it's not a question that I, as a British person with no refugee experience, can begin to answer. What I can say about On Fragile Waves is that its empathy leaps off the page: an empathy that doesn't shy away from showing characters at their lowest, or darkest, or most destructive, but is always fundamentally generous about the circumstances and motivations that underpin those dark moments. I found it impossible not to feel for almost all of the characters (shitty racist camp guards obviously being among the exceptions), even when their motivations conflicted or it was obvious that one character's emotional response to a situation was notably shallower than the other parties involved. For instance, Grace Nguyen, the language teacher who volunteers with the Daizangis, laments the amount of food at that Bahar insists on her leaving with and considers her Vietnamese family's own refugee experience; we know from Firuzeh that the food Grace has left with will result in the Daizangi family themselves going hungry, in the name of maintaining a form of hospitality which doesn't even cross the cultural divide particularly well. Yu's choice of narrator, and the detached way the narrative plays out, seems to reflect that focus on seeking empathy rather than full understanding Firuzeh's childish reactions to her circumstances require a different sort of narration to what her mother or father's perspective might look like, and I think it was the right choice for the book to avoid making any specific judgement about her parents' motivations. This story isn't the right one to give them a direct voice, and I think that's OK.

On Fragile Waves is a hard book. Given the subject matter, there's no responsible way for it to be anything but a hard book. But it's also a book which ends, however tentatively, with a feeling of hope: that despite systems of oppression, people do survive, and things do get better, and there will always be people who care and try to do right by each other even when our experiences make it hard for us to understand. Despite that, I think it's an excellent read - one which I devoured in an afternoon and found myself deeply satisfied by. If this is where Erewhon is going with it's line, I'm more invested than ever before.

Bonuses: +1 A deeply empathetic story that works within the boundaries of its own undersatnding