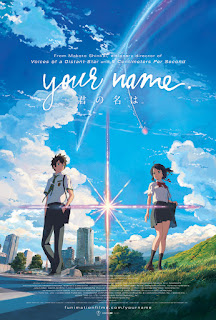 Package Type: Film
Itinerary: Mitsuha is a teenage girl who lives in a small, rural Japanese town called Itomori, and belongs to a family whose duty it is to maintain the town shrine. She chafes against her  responsibilities at the shrine, which are dictated by tradition, and her future prospects, which seem circumscribed by her town and her gender. Her father, for instance, disliked the duties of the shrine, and simply left the family and all of his responsibilities after Mitsuha's mother died. Far from being chastised for this, he's now the mayor of Itomori. Mitsuha wishes not only that she could live in a big, vibrant city, but also that she could be a boy, unfettered by traditional expectations for how a girl "should" behave.
Enter Taki, a teenage boy living in Tokyo, trying to balance school and a part-time job at a restaurant. Enter body-switch movie territory.
Inexplicably, Mitsuha and Taki begin switching bodies, and making a mess of each other's lives. They eventually work out a communication system using their phones, leaving notes for each other and keeping the other appraised of what happened while each was inhabiting the other. After the crash landing each experiences after first swapping bodies, they begin "fixing" each other's lives, where Mitsuha (as Taki) sets up a date with Okudera, the waitress Taki secretly likes, and Taki (as Mitshua) stands up to some of the kids in school who have been bullying her.
This is all pretty basic body-switch movie stuff, but when Taki realizes on his date with Okudera that he actually cares more for Mitsuha and should try to contact her, the film takes a stunning left turn that catapults it far outside of any type of body-switch trope territory and turns the narrative on its head. To say more would be to rob a future viewer of the experience of this film.

Travel Log: I first saw Akira Kurosawa's Ikiru about 20 years ago. Your Name is the first film I've seen since then that has excited me in the same way through its use of narrative structure. This is high praise, indeed. It doesn't rely on a twist ending -- those are fun and exciting when done well, sure, and a film like Inception is imaginative and labyrinthine, but Your Name does something unique, and pulls off a trick I have never before seen in a movie. It convinces you that you're watching one thing, and then reveals halfway through, in stunning fashion, that you've been watching something different the whole time. Re-watching the film, you see the sign posts and clues, and I for one, simply marveled at the storytelling and visual cues used to pull off the narrative.
But putting aside the narrative tightrope that Your Name navigates so successfully, the film offers other joys. I am a big fan of Studio Ghibli, and count Kurosawa as one of my favorite directors, if not my very favorite. But these films offer a specific perspective on Japan. The films of Miyazaki often exist in the realm of historical fantasy, exploring a uniquely Japanese sense of spirituality and harmony. Even films like The Wind Rises, which dispenses with the fantasy, is still set in the Japan of the 1930s. Kurosawa set many of his films long before that, dealing with samurai and Shakespearean transpositions to feudal Japan. Yet his contemporary films, films such as High and Low and Stray Dog, were made in the 1940s and 50s.
So as an American, I found the depiction of today's Japan in Your Name compelling and evocative. The Itomori of 2016 is a close parallel of the small towns I've seen in Ghibli films from My Neighbor Totoro (set sometime in the 1950s) to When Marnie was There (a more contemporary setting, but with time-switching fantasy at its narrative core). Seeing those traditional settings and patterns through the lens of an up-to-the-minute now, and through Mitsuha's frustrations with how stuck in the past everything seems, had a lot of emotional resonance for me. And then to see the marvel of Taki's present-day Tokyo, and to experience it through Mitsuha's eyes, made watching Your Name a rich, evocative experience in its juxtapositions of an animated Japan I've seen for many, many years, and a new one that I had not seen.