I'm back - on a scheduled Thursday no less - with the last Questing in Shorts of the year, and possibly the last column in this format, at least for a while. It's been 2 years since I started my quest to explore short fiction reading and reviewing more seriously, and while I absolutely love the new fiction and perspectives it's brought my way and have no intention of slowing down, the last few months have shown me that this particular monthly roundup format doesn't really play to my strengths, and too often (for example, at the time of writing) leads to last minute sprints to pin down reactions that never feel like they're as fresh as they should be. I'm going to take a bit of time to figure out how I can work my reviewing around my reading more organically, and what that means for a potential schedule. For now, though, let's round up what short fiction I've been reading in the last month: 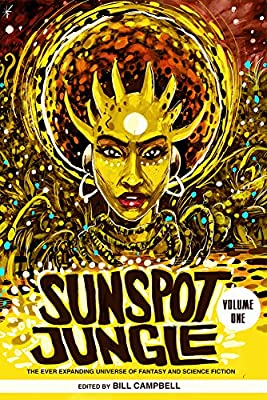 The first of Rosarium Publishing's two volume "mix tape" of science fiction and fantasy from around the world, is a 500 page chonker filled with fifty one stories, curated to an extremely impressive standard. If you've been paying attention to the current SFF scene, you're bound to find some of your favourites in here: the first story is "Walking Awake", a chilling alien colonisation story from N.K. Jemisin (one of the few stories in the collection I'd read before); the last is "The Day It All Ended" by Charlie Jane Anders; and the likes of Sarah Pinsker, Mame Bougouma Diene, Amal El-Mohtar, Malka Older, Silvia Moreno-Garcia and R.B. Lemberg are also in here among lots of others, including plenty of names that were new to me. It all comes together, as per the introduction, to form a celebration of the potential of genre right now, and particularly the multitude of voices accessible to English speaking readers. If you only have one short fiction anthology on your shelves, Sunspot Jungle would be an outstanding choice for that spot.

Reviewing 50 short stories in 300 words is not a task I care to take on, and the quality here is so high that it's hard to even highlight favourites (OK, if you must know it's "A Good Home" by Karin Lowachee, a quiet, moving story of personhood and rehabilitation between an engineered soldier and a disabled veteran). As you'd expect from an anthology which sets out to be as inclusive within the genre as possible, there's quite a range of literary weird and slipstream fiction alongside the spaceships and robots and glimpses of secondary worlds, and there are plenty of stories that feel like they end abruptly, before the narrative has had a chance to close. This is not my favourite form of short story telling but when the stories are good, I can hardly complain. It adds up to a book that is best savoured: left on a bedside table or read, a couple of stories at a time, on a train commute (remember those?) - a trusted source of quality fiction for as long as you need it. 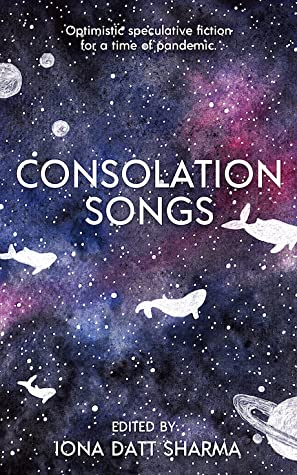 This anthology contains a dozen stories about hope in times of crisis, and its subtitle is explicit about its purpose: this is "optimistic speculative fiction for a time of pandemic", and the stories here absolutely deliver on that promise (plus, all proceeds are being donated to the UCLH charity, supporting COVID-19 work by the University College London Hospitals NHS trust). Some are more overtly optimistic than others: Aliette de Bodard's "A Hundred and Seventy Storms" is a Xuya universe tale about a mindship set to work in harsh conditions on a backwater planet, trying to survive the latest storm that threatens to tear her apart with the help of her Cousin Lua.  The Snow Like a Dancer has little to look forward to beyond further decay and desperate survival, but de Bodard's story makes that feel, for a moment, like it just might be enough in the circumstances. Adrian Tchaikovsky's "Low Energy Economy" also takes a person in an almost impossible situation - Tobler, one of a generation of miners sent out into space in individual capsules that, decades later, are slowly failing around them as they keep up their lonely work - and only at the very end twists it into something that makes that survival worthwhile. These are not stories that justify the decisions that caused their protagonists to be in their awful circumstances to start with, but which offer weight to the resolve to simply keep on going: to fix the red alert lights we can fix, file a maintenance request for the rest, and move forward with whatever we have.

Most of the other stories are more lighthearted than this, running from lighthearted whimsy (like Stephanie Burgis' "Love, Your Flatmate", about a human and a fae stuck together during lockdown who eventually start to learn they might have things in common beyond a predisposition for passive aggressive note passing) to gentle wistfulness. Characters make quiet decisions, like whether to move into assisted living on Mars in "Seaview on Mars" by Katie Rathfelder, or to pursue a new queer romantic relationship at 50 while also caring for sufferers of a mystery coma-inducing disease in the middle of a major climate shift and the appearance of mysterious travellers from another world (as you do) in "St Anselm-by-the-Riverside" by Iona Datt Sharma. The star of the show, however, is "This Is New Gehesran Calling": by Rebecca Fraimow the ever shifting tale of a pirate radio show, put on by refugees from an invaded planet, and the fellow citizens who discover it and try to build their schedules around these snatches of entertainment from their former home. The snatches of worldbuilding from multiple angles and the way it builds up little pieces of the lives of its refugees and the struggles they face make for a perfect, deeply human tale, and its eventual ending caught me, as they say, right in the feels.

I'm very uncertain why Reconstruction has been on all my lists as a 2021 release when, in fact, it seems to have come out last month, but here we are! Alaya Dawn Johnson's debut collection spans work from the breadth of her career, from 2005 to this year, and there's some impressive gems within it. "A Guide to the Fruits of Hawai'i", a 2015 Nebula Award winner, is definitely one of them (and it's a story which feels familiar, though I'm fairly certain I've not read it before): the story of Key, a human worker at a feeding centre for vampires, after vampires have taken over and herded the remaining humans into their camps. Key is nearing the end of her usefulness as a worker and is desperate to find escape, but when she's reassigned to a high-grade facility to look after a group of teenagers whose relative privilege doesn't make up for their situation, she is forced to examine her own decisions about collaboration and the option to potentially become a vampire herself, while trying however imperfectly to make life bearable for her young, grieving charges. Its a great novelette with a gut-punch of an ending, and it's a great way to start off the collection.

Through whatever accident of curation, my other two favourite stories also happened to be right at the start of this collection: "They Shall Salt the Earth With Seeds of Grass" is about survival in a future Chesapeake where humans survive alongside strange, alien "glassmen", present in their lives through robot drones that are prone to dropping bombs and abducting people for strange and nebulous reasons. When Tris becomes pregnant, she and her sister make a desperate journey to find somewhere that can offer a safe (though illegal) abortion, kicking off an entertaining, action packed tale that packs in a lot of worldbuilding and a very satisfying strand of resilience in adversity. Then there's "Their Changing Bodies", a bizarre but wonderful YA-esque summer camp story where a trio of girls find themselves on the menu for a group of sleazy boy vampires. The fourteen-year-old sexual awkwardness jumps off the page in this one and it won't be for everyone (especially as, incompetent as they are, the boys' intentions are fundamentally about sexual assault) but if you're up for exploring some of the kind of gross body stuff that only early teenhood can provide, the take on vampirism here - very different to the first story! - is absolutely perfect. All in all, although it fell off for me a little towards the end, this is a really solid collection from a great author. 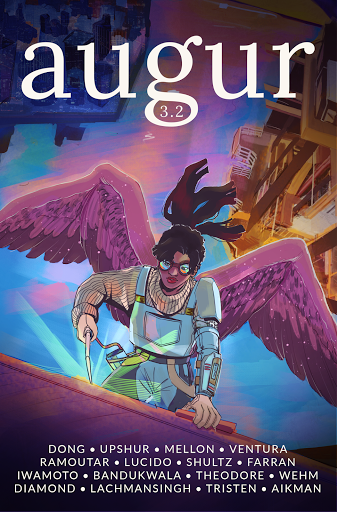 A themed issue of Augur this time, based around "A Multiplicity of Futures": science fiction stories which explicitly focus on the paths our world might take. This being Augur, a lot of those directions are strange and sad, as in "The Truth at the Bottom of the Ocean". Maria Dong's story blends the experiences of a seafaring community displaced onto the open ocean by climate change with the love of a mother for a son who has grown up with that displacement and found ways to survive that alienate him from her, and the reality of a capitalist future dominated by climate change with fantasy coping mechanisms: a boy sprouts wings, while a woman's skin becomes made of stone, letting her dive into the depths of the ocean without consequence. "Are We Ourselves" by Michelle Mellon feels almost old-fashioned in the detached, matter of fact tone with which its protagonist tells us about the world she inhabits, and the historical events which have led to a future where Black bodies are co-opted (in a manner which directly relies on the legacy of slavery) to house the consciousnesses of white people who would otherwise die of a climate-change related illness. Make no mistake, though, this is no detached golden age story of scientific progress, and by the end, the protagonist's lived experience, and the individual horrors she has gone through are inescapable. Her ending invocation directly drawing attention to the importance of her human experience, her individual story, when weighing up the moral harm of what has been done to her, and generations of her people before her.

And so the losses of our possible futures mount up, from unsurvivable shipwrecks to worlds where food itself is processed to be poisonous without the right tech installations. As the loss builds up, though, so too do the moments of quiet calm and discovery: "Moon Gazing", by Michelle Theodore, is a very welcome visual rest stop, a comic about a child and their Dad talking about their respective dreams of travelling to the moon. I also loved the poem "When I Could Draw a Sun in the Sky", by Manahil Bandukwala, which offers a very personal spin on the experience of playing the video game Okami, and "X.O. Tempo," in which a woman finds her own deeply cool spacefaring alter ego through a process of quantum entanglement, and gets to shake up her own life a little while she's at it. Once again, Augur demonstrates it is not a publication to be ignored.