Microreview [Book]: When the Tiger Came Down the Mountain by Nghi Vo

History and storytelling make a proficient pairing in this gorgeous novella. 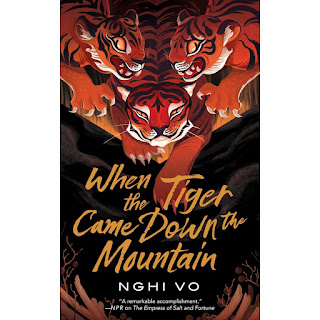 It’s hard to pen a story in which the lines are blurred but the narrative is always clear. Ambiguity and warring perspectives can hurricane into incomprehensible pandemonium. However, When the Tiger Came Down the Mountain manages to have characters who not only inhabit both the bodies of animals and humans, but have characters performing oral storytelling that’s just as fluid. What kept me engaged wasn’t rigidity and linearity, but a narrative voice that always had control with a grip greater than any rigidity.

This story takes place in the same world as Nghi Vo’s other novella The Empress of Salt and Fortune, but it can be enjoyed without reading its predecessor. It follows Chih, a travelling cleric who has a run-in with three tigers of seemingly malevolent intent. At the tigers’ request, Chih tells them the story of Ho Thi Thao, a figure with a complex history. The tigers’ interest of the story lies less in Chih’s retelling, but in seeing the differences between the human recounting and their own specie’s recollection. With death by tiger-mauling perhaps on Chih’s horizon, the story is infused with a sense of dread. But Nghi Vo expertly mitigates the horrors with the tigers’ flavorful, humorous personalities. It adds zest to the novella but not overly so to rob it of dramatic stakes.

I was a fan of Nghi Vo’s lyrical writing in her first novella, but with When the Tiger Came Down the Mountains, she takes it to the next level. It’s a tricky feat to have poetry worthy of admiration without losing the momentum of the story, but Nghi Vo infuses every sentence with ornate lyricism while still being pacier than most fantasy novels. And best of all, reading it is a lot of fun.

If there’s one complaint, it’s that a lot of the events in the first chapter seemed minor compared to what succeeded it. Characters are introduced at a breakneck pace, but many of them play an inconsequential role. The writing at the beginning certainly sets a mood, but the story would’ve felt more satisfying if some characters weren’t stripped of importance in the latter portions.

Mutability is the key word in this novella. Characters change forms, from human to tiger. Interpretations of stories are colored based on the teller’s disposition, history, and predilections. The right thing for the character to do in a story depends on the teller’s upbringing. Ferocity can be seen as a sign of villainy or strength. Submissiveness can be seen as a sign of weakness or necessity. The way we tell our stories and the things we take away from them is the most powerful window into someone’s values. And each culture is unique—there is no mutability that can morph into a carbon copy of our own.

When the Tiger Came Down the Mountain doesn’t have an earth-shattering conclusion. The stakes aren’t so dire that if Chih fails, the world will end. But its message still has weight. It offers an array of perspectives of one story. And by looking at every permutation, you can look at the distinctiveness of people. Like how sometimes a perspective that seems malevolent on the surface is actually conceived in good faith. The understanding of that mutability can prod you to cross a blurred line and find level ground to share with others.

Bonuses: +1 For writing my favorite tigers in fiction.

Negatives: -1 For a first chapter that feels a little disconnected from the rest of the story.

Reference: Vo, Nghi. When the Tiger Came Down the Mountain [Tordotcom, 2020]