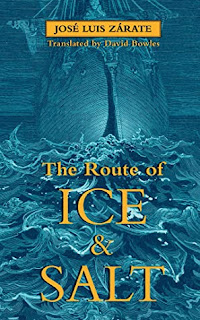 Package Type: Novella
Itinerary: The Route of Ice and Salt fills in a piece of the narrative of the original Dracula novel, by Bram Stoker, springing out of the journey that Dracula takes from Istanbul to England by sea. As vampires are notable for not being particularly good sea-travellers, this voyage involves a lot of large crates full of earth, and the crew of the Demeter all meet mysterious fates, ending with the captain, who is found lashed to the wheel, his log telling the story of how he had tried to keep the ship and its monstrous passenger from landing. The novella expands on the voice of the Demeter's captain during the voyage, imagining the character as a repressed, traumatised and lonely gay man attempting to maintain his position amongst his crew, while grappling with erotic fantasies about the other men around him.

Once the vampire comes on board, these fantasies - and the Captain's dreams - become progressively more disturbing, but it's not until the crew members start disappearing that the Captain, and his dwindling circle, begin to investigate their otherworldly cargo and the curse it's brought upon them, that the scope of what they are up against becomes clear. The monster on board - whose identity is known to us, but not to the crew, and presented here in a way which fits with the original mythos while leaning even more on psychological manipulation abilities which, in the Captain, find a very easy mark for most of the book. However, While we know the Captain's ultimate fate from the outset, however, The Route of Ice and Salt does justice to his fight against the monster and his eventual act of sacrifice, providing him with an arc that offers him a renewed understanding of himself and his desires, and the ability to harness them against the much greater evil he faces.


Travel Log: The Route of Ice and Salt was published in translation for the first time this year by Silvia Moreno-Garcia at Innsmouth Free Press, who has noted its cult status in Mexico and its importance particularly as a queer horror novella at a time when Mexican culture was conservative and hostile to queer people. While it's impossible, as an English language reader in 2020, to fully appreciate the context in which this story was originally published, the themes it tackles and the fact that it riffs off a text that is very well known and very accessible to English speaking audiences makes it an important book on multiple levels, one that I'm very glad has been made available. Indeed, The Route of Ice and Salt literally lifts the log of the Demeter, as presented in the text of Dracula, and while it's definitely possible to read the entire novella without getting that reference (I read Dracula long enough ago that I don't remember its detail super well) I think it adds a layer of enjoyment just to know that this is a novella in conversation with a significantly older and more culturally entrenched piece of media.

Vampires, of course, come with a long history of exploring taboo sexualities and societal transgressions, and that very much includes queer desire. In The Route of Ice and Salt, male homoerotic desire is front and centre of the narrative, with early chapters almost entirely taken up by the Captain's fantasies about his crew's bodies, their presence around the ship and what he'd like to be doing with them. He also fantasises about a prior lost love, one who apparently met a terrible end. Even as the Transylvanian soil gets loaded up and we start to worry about what's coming down the line for the Demeter's crew, it's already clear that the Captain's life is one of trapped horror, the combination of homophobia and trauma from his past making his narrative painful from the outset. These parallels only get more overt as we learn more about his past, and particularly the fate of his lover, who as a queer man faced violence of the sort that, in a less thought-provoking vampire story, would only be levelled at monsters. Zárate uses the Captain's acute awareness of his forbidden sexuality to push these parallels, especially the parallel of hunger and appetite (as when the Captain fantasises about licking salt of his crew members' skin) and the question of what we become when we give into fantasy, especially those involving people we hold power over.

The language of this translation of The Route and Ice and Salt is consistently poetic and evocative, conveying the sense of desperate fantasy transmuted into psychological horror extremely well. While the Demeter's eventual end is a fixed point, there's a lot of suspense here as well, particularly once the crew start being picked off. There's also some business with rats which is very convincingly squicky, and I don't normally say that about small fuzzy mammals no matter their reputation. While it's the Captain's fight - first against his own desires, and then against the vampire - which takes up centre stage, there's a sense of a convincing dynamic on the Demeter, and the fact that the crew only really start becoming more than objects of desire once the threat is already on board makes the impact of their disappearances much more felt.

The Adventure: 4/5
The Scenery: 5/5
NerdTrip Rating: 9/10
POSTED BY: Adri, Nerds of a Feather co-editor, is a semi-aquatic migratory mammal most often found in the UK. She has many opinions about SFF books, and is also partial to gaming, baking, interacting with dogs, and Asian-style karaoke. Find her on Twitter at @adrijjy
Posted by Adri Joy at 12:00:00 AM