A multiversal space opera featuring a sole survivor whose desire for revenge brings him into a conflict far larger than he could imagine. 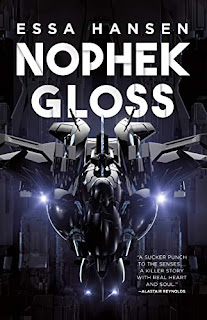 Caiden once had a pastoral, even idyllic existence. Sure, the farm - and the entire planet - where he, his sister Leta, and their parents live has seen better times. And sure, the ship landing is not bringing supplies, but rather taking everyone elsewhere. But it will be all right, it has to be. It is not until Caiden and his family are disgorged onto another planet...a planet with rather hungry inhabitants... that Caiden realizes just how his life has been a lie: the farm he has been raised on all his life had him and his family and friends as the livestock.  Caiden is seemingly the only survivor.  By accident, luck, chance and design, he finds a crashed spaceship. Soon, he meets a group of crash landed adventurers who can help him to get the ship running, and gets off of the death planet in the bargain.

Now, Caiden, with his found family, and a small supply of the precious material Nophek Gloss (one of the most valuable in the universe), must dare to counter the slavers and killers who destroyed his family and his people. However, in the process, he will find that the conflict, and struggle, is far larger than he imagined. And the decisions and problems he faces are far larger than a simple slaver raid on a pastoral planet. Far darker ones, too. Caiden is going to have to grow up, fast, and learn the ways of the universe...the multiverse.

This is the story of Essa Hansen’s Nophek Gloss.

The writing, on a line by line level, is where the novel really shines. It’s a first novel, and it's very well polished for all that. The novel’s strength is in sensation, description and how Caiden feels and reacts to some rather dark and visceral events. Sole survivor of his family, his people, his planet is a hard burden for anyone, and the author convincingly brings the main character’s plight and how he feels about it all, especially given the character’s youth and inexperience. The “young man goes off into the greater universe" is a story older than Luke Skywalker, someone else who lost his family and his pastoral way of life like Caiden does. And like Luke, Caiden finds that he is far more than he suspected he was, and that nicely ties into the overall plot in an organic way.  Add to the writing chops some action and adventure beats, ranging from the harrowing flight from danger on an alien planet, to spaceship battles, to straight up brawls.

I really enjoyed the worldbuilding as well. This is a novel stuffed with ideas, concepts and setting, and the author uses the newbie character POV effectively to allow us to learn, as Caiden does, about the verse that the author presents. Multiple universes. The amazing Emporium, where anything might be bought and sold. The harsh world of the Casthen. Azura, the spaceship that Caiden found. And much more. I thought there was just the slightest bit of inconsistency in what a farmer would know in terms of language and concepts, but I am willing to only note it than overly criticize it. But there are a lot of worlds, places, species, technologies, and universes for the author to bring across, and Hansen manages it most effectively. It’s a rich diverse world of aliens, humans, and rather startling technologies. It makes me think of the recent Max Gladstone Empress of Forever in the same sort of style on how the world is conveyed in prose. Like I found that novel rich and flavorful and a novel to be savored, this novel evoked the same sort of feel. I fell into the multiverse of this book and enjoyed it. There is a helpful glossary at the back of the book, and it is useful.

In keeping with that, the plotting and through line of the book is really thought out well, especially given a revenge minded young man with a lot of potential, but not yet a lot of skills or the wherewithal of making this plans come true. The comparison I like to think of here is a very young version of Jack Vance’s Kirth Gersen (from the Demon Princes novels).  That character has a very driven agenda to take down the slavers that ruined his home, but when he first really met on stage, he is an adult. Caiden’s life and goals and path start at the inciting incident and make us feel for Caiden’s plight in a way that is far more abstract for readers of the Vance novels. But the same implacable drive is there, and the plotting and strategizing, and also the mistakes of a young man, give Caiden’s story of revenge against slavers that no one seems willing to tackle (Kirth can and does relate) an additional and intriguing punchiness.

The thing I would caution for readers is that the novel’s shiny exterior and outward face, like Valerie Valdes’ Chilling Effect, is that in it lies a darker story than you expect. Yes, the main character loses his family, society and world early on and that is rough enough, but as the novel progresses, there are additional dark strands, and it gets rather graphic and dark at times. This is a novel where you want to take the trigger warnings seriously, since as noted above, the writer has serious writing chops and the dark, triggery elements are not glossed over. The author quite effectively makes you *feel* it all.

Nophek Gloss is clearly and definitively the first of a series. There is a decent and definitive ending to the storyline in this book, and a just as obvious hook for the next book in the series, which does excite me for the next volume. That’s always a tricky balance to make--make an off ramp possible, and still not forestall future possibilities. Essa Hansen manages this in Nophek Gloss and I look forward to more of Caiden’s adventures in the subsequent volume. More, please.

+1 for an interesting and intriguing multiverse, with solid worldbuilding

Penalties: -1 The darkness of Caiden’s early story and revelations thereof might turn off or not be really suited to some readers.