A no holds barred, fully feminist and fulsome military SF space opera that showcases the talents of the author in a new subgenre. 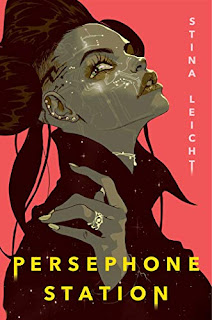 Persephone is a rough and tumble planet. The Serrao-Orlov Corporation has a tight lid on it, and there is a colony there, but its usefulness is a big question. Life outside the colony is harsh, in terms of weather, and the local fauna and flora. So why does Serrao-Orlov bother with the place? Therein lies the secret of Persephone: An alien race, inheritors of a high precursor civilization live on Persephone, secretly. A few in the Corporation know this, and the deal in place keeps everyone happy. Its a big secret, because alien races are not and should not be treated this way. But when an ambitious executive of Serrao-Orlov decides to alter the deal to squeeze more out of the aliens,, a group of mercenary types are the only thing to stop them from doing so.

This is Stina Leicht’s Persephone Station.

There is a broad wealth of worldbuilding here, from the personal to the interstellar. There is so much packed in the novel that if not for the writer’s skillful plotting and characters, it would be all too much and unwieldy, even in 500 pages. A well developed and interesting alien planet, check. Interesting set piece locations that work within the city. Check. Lots of interesting detail on corporations, corporate politics (internal and external?) Check. Interesting development and a strand on artificial intelligence and human-AI interactions, complete with fears, maneuvering and development? Check. It’s a big and rich world, and I ate it all up. It feels resonant with books like Patrick Tomlinson’s In the Black and Martha Wells Murderbot series, but it is entirely Leicht’s own universe.

The author’s skill with characters comes in here with this ragtag crew of mercenaries, criminals, thieves and others who come together ultimately to oppose Serrao-Orlov. They have a distinct and wide set of backgrounds and story arcs, and the author gives us lots of detail on them, especially our viewpoint characters, to bring them and their stories home. Be it Rosie, owner of Monk’s Bar, a hive of scum and villainy all the equal to the Mos Eisley Cantina, to Angel, the head of a mercenary band who finds herself at the point of the defense against Serrao-Orlov, to Kennedy Liu, who is passing for human and learning human ways while she really is...well, that would be telling.

That does seem to be a theme in the book and the characters that the author likes to play with and explore--who people are and what they want to be, and what face they present to the world--be it to themselves, to their close friends and colleagues, and to others. The aliens, when they come onto the stage in the main portion of the novel (they appear in a prologue) further explore these questions of identity and personality in a vivid and nuanced way. All of the mercenaries and outcasts that line up against Serrao-Orlov have their issues, their breaks, their attempts to build themselves better. The author goes for this theme alternatively in heavy and forceful notes, and sometimes much more subtly. It’s a theme that has appeared before in Leicht’s writing, and she explores it in a new and different way, here.

The author’s writing skills were also honed on the action sequences in her earlier fantasy novels, and the answer to whether or not those translate to a Mil-SF Space Opera setting is a resounding yes. Be it a barroom brawl, a standoff between corporate types and mercenaries, or the show stopping set piece battle that dominates the back portion of the book, the author’s fluid ability to bring the excitement, the pain, the danger and the power of action sequences translates very well to the far future world of Persephone. I keep thinking of the Borderlands video games, hardscrabble vault hunters going up against fearful odds, often at high personal cost. Fans of those games will find a lot to love in this novel.

The plotting is strong even as it falls under familiar lines. After the aforementioned prologue, we get introduced to our main characters, who are drawn together by the prospect of a payday in what seems like a simple protection plan. Even as corporate politics and cutthroat deals swirl around, the main conflict that executes over the end portion of the book is efficiently put together piece by piece. And when that final conflict sets off, the tension rises and crests, with excellent use of breathing spaces, and pacing to keep the reader turning page after page. My only nit is that I think that the main conflict could have used one particular additional point of view to capture the action even better than she does.

Finally, it should be said that the novel is firmly and unapologetically feminist as all out. All of the main characters on both sides of the conflict are women and the novel takes the point of view, still a radical one here in 2020 it seems, that women can run a space opera verse and run it very well, thank you very much. The novel is a thumb in the eye to endless space opera novels where women are as scarce as hens’ teeth, to be at best prizes and awards, if they appear at all, or at best a Smurfette. Leicht says no to that, and thusly proves the absurdity of that point of view.

Persephone Station is a levelling up for the writer, launching her and her work into a new subgenre of SFF with verve, daring and drive. I’d love to see more from her in this vein, be in this universe (which has a ton of potential for more stories for these and other characters) or other SF works. More, please!

Penalties: -1 A little more flexibility with point of view in a couple of sequences would make the strong narrative even better.