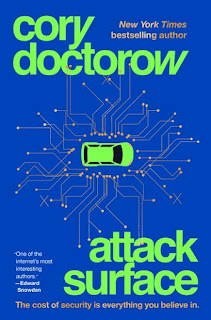 He who controls the online information flows controls everything — including you. When our lives become increasingly digital and our everyday appliances, apartments and cars are assortments of computers with dubious privacy, we can never be truly secure. This is especially true if we disagree with those who control everything. Something along these lines might be the message of Cory Doctorow's novel Attack Surface. Indeed, it is a book with a message which makes it a bit hard for Doctorow to make in truly enjoyable, but he does not do a bad job. As far as online privacy message fiction goes, Attack Surface is in fact a rather good read, especially when Doctorow manages to keep his didactic impulses at bay.

Attack Surface continues the story of Little Brother (2008) and Homeland (2013) in which we followed Marcus Yallow, a nerdy teen who becomes a hacker guerrilla after a terrorist attack on San Fransisco. US that Marcus and his friends live in becomes practically a police state which turns loose its overreaching security agencies with devastating consequences. Whereas the first two novels were YA, I suppose Attack Surface is a book aimed at adult readers. This time the protagonist is Masha Maximow, a conflicted hacker who sneers at Marcus's ethical grandstanding but still cares deeply for privacy and (although a little less) for doing the right thing. Unfortunately, she works for a shady IT firm that specializes in selling surveillance technology for authoritarian regimes.

While working, she helps the bad guys with tech, but off-duty, she helps anti-government protesters stay safe from the same technology. It is inevitable that her hobby will get her into trouble, and that is where the story starts. In the beginning of the book, she is based in "Slovstakia", a code-named East European country where the security apparatus plans to keep democracy activists and other troublemakers pressed down indefinitely. Losing her job is unavoidable, as is losing her friendly connections to the Slovstakian activists, and Masha returns to San Francisco without knowing what to do next. Back home, her childhood friend Tanisha who is also a political activist has run into trouble with surveillance technology as well, and when Masha looks into it, it looks a little too familiar. Turns out Tanisha is targeted by the cyber surveillance technologies Masha had been developing for another shady government contractor. There are demonstrations, weaponized self-driving vehicles, eroding civil liberties, mass surveillance and a lot of hacker talk about security and compromised devices.

Masha's backstory forms a big chunk of the narrative. She was a supporting character in ther earlier novels but now Doctorow fills in everything around the events featured before. In Little Brother, Masha used Marcus to plan her own escape from government goons and kidnapped him in the process, and in Homeland, she became Marcus's helper and a whistleblower who revealed some dirty secrets. In theory, Attack Surface can be read on its own, but readers who are familiar with the earlier books certainly get the most out of it. Otherwise, the details of how Masha got hold of the information she gave Marcus in the previous novel is probably not very interesting. Switching the main character is a good move, however. At least I preferred Masha Maximow to Marcus Yallow who always felt a bit simplistic protagonist. Now, a well-meaning IT and privacy enthusiast has been replaced by a more Snowden-esque and conflicted character, who has to juggle, negotiate and compartmentalize in order to stay sane. The Edward Snowden quote on the front cover is certainly stamped on the right book.

Attack Surface is a smart technothriller with smart people and smart technologies. The technical side is mostly interesting, but at times Doctorow really cannot hold back. When Masha gets out of jail after a brief and borderline unlawful arrest, she gets back her cellphone that the police has done who knows what while she was in custody. Masha cannot trust the device anymore but having a cellphone at hand and not using it is impossible. So she smashes the phone. That it followed by a page-long discussion of the philosophical underpinnings of the concept of Olysses pacts that at least this specific reader could have done without plowing through. Undoubtedly this is how nerds think and speak but enough is enough. The narrative lecturing and infodumpy dialogue leave little work for the reader.

Sadly, the novel is highly relevant and could take place in our world — or I guess one could make the argument that in fact it does. San Francisco, Iraq and Mexico City are real places that feel real, and it is a little disappointing that the Eastern European country that is so central to the story is so artificial. Like Dr. Doom's Latveria, Slovstakia is an exotic mishmash of stereotypes. It would have been neat to learn something about a real place like Belarus or pre-Maidan Ukraine that Slovstakia is clearly emulating, but the country — like many elements in the novel — is there to make a point.

Nerd Coefficient: 7/10 – "an enjoyable experience, but not without its flaws"