Nanoreviews: The Bone Shard Daughter, Queen of the Conquered, Weave the Lightning 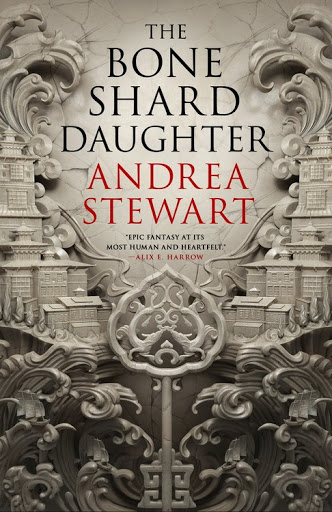 Paul's review highlights The Bone Shard Daughter as one of the most interesting debuts of 2020, and I can't help but agree: in a year with more big-name queer necromancy adventures than one might expect, Andrea Stewart's book stands out for its interesting character arcs and for being sheer good fun. Set in an archipelago empire where order is maintained against mysterious supernatural threat through the harvesting and use of "bone shards", a sliver of skull taken from citizens and called upon to power constructs when needed, The Bone Shard Daughter opens, in true epic fantasy fashion, at a point where things are on the precipice of change. Entire islands are sinking, the emperor seems to be increasingly reliant on complex constructs and intricate schemes, and both the bone shard system (which kills a small number of youths at the point their shards are taken, and also leads to anyone whose shard is used in a magical way to become chronically ill and eventually die) and the overall social organisation of the empire are being questioned by forces of rebellion.

The Bone Shard Daughter sets up a deep, intriguing world and sets it in motion with a compelling, cast of characters, including an emperor's daughter trying to prove herself worthy of becoming an heir, a smuggler with a heart of gold who ends up becoming a folk hero after saving a child from a sinking island, and the complacent heir to a governorship who is drawn into the heart of a rebellion. Though some of these viewpoints move faster than others - I spent a long time waiting for Lin, the Emperor's daughter, to pick up the pace a bit in her sections, which revolve around her uncovering her father's secrets and prove her worth while trying to undermine his rule - but by the midpoint, The Bone Shard Daughter had me hooked on all of its twists and turns, even as some ended up more predictable than others. It can only help that many of these mysteries revolve around Mephi, a character who turns out to quite definitely not be a kitten but also to be an extremely cute furry addition to an already stacked cast.

There's a lot to be explored in further books: some central mysteries remain largely unsolved, and there's also deeper ethical questions about this world, and particularly the nature and sentience of constructs, which doesn't really get delved into here but have a lot of implications future volumes. As it is, though, The Bond Shard Daughter has shot very near the top of my best of 2020 list with its blend of adventure and smart characterisation and worldbuilding, and this is a series I will definitely be pressing into peoples' hands when it comes to awards voting in 2021.

Queen of the Conquered by Kacen Callender (Orbit, 2019) 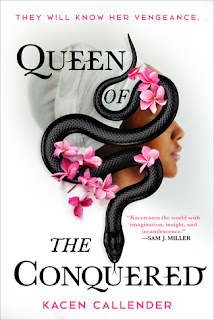 Sigourney is a member of the kongelig, elite governors of a colonised island chain called Hans Lollik. She lives a life of relative luxury, built on the backs of islander slave labour and defined by alliances and scheming with the rest of the kongelig as they vie to take over from the current regent and rule over the islands. Unlike the rest of the kongelig, though, Sigourney is herself an islander, the last member of a family who generations before had manage to scrape their way into freedom and go into business with a Fjern coloniser. Sigourney's status has never been accepted, and when the rest of her family were massacred under mysterious circumstances, she pledged herself to exact revenge and take her place at the head of the islands herself. She's helped along her way by her magical "kraft" (a set of innate abilities which the kongelig are allowed to have, and which islanders are usually executed for displaying), which lets her read the thoughts and access the memories of people around her, letting her see exactly what both the Fjern and her own people think of her.

Make no mistake here: Sigourney is a really challenging protagonist to follow around. She's an unrepentant slave owner, convinced of her own righteousness and her entitlement to use the people around her to get what she wants: a goal which she assumes she is the only one amongst the islanders qualified to achieve. While there's a strain of pity involved in following such an isolated protagonist, the narrative never lets us forget that she has internalised a great deal of the ethics of the elites around her, and it's particularly obvious in her interactions with Mareike, the woman who raised her after her family were killed, and with Loren, the mixed race half-brother of Signorney's Fjern husband, who insinuates himself by her side despite originally being sent to kill her. Because she can read memories, and the text often introduces her discoveries in an almost impassive, omniscient third-person style, it's easy to feel, like Sigourney herself, that she has all of the answers to the political questions surrounding her. But as she attempts to make her move against the regent while the rest of the kongelig are being murdered around her, Sigourney's blind spots and prejudices become clear, and the ending offers a really satisfying resolution to the ethical questions surrounding Sigourney. Not all readers will find following a morally questionable character like Sigourney a pleasant or worthwhile experience, but I really appreciated Queen of the Conquered for what it brought to the table: a fantasy which calls into question tropes around chosen ones and princesses who suddenly discover their righteous moral compass, set against an exploration of colonial power structures and the damage they do to those living under them. Well worth a look. 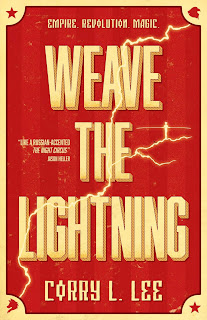 In Weave the Lightning, magical energy comes from periodic storms - which can sometimes disappear for well over a century before coming back for a few decades - and those who wield it can also access a magical space parallel to reality which they can, to some extent, shape to their wishes and use to influence the world. For Gerrit, an elite cadet within the Storm Guard of Bourshkanya, wielding magic means proving himself and gaining the skills needed to protect his squad. For Celka, daughter of dissidents now living in secret with her aunt and uncle as part of their highwire act, the storms are a risk, threatening her self-control at the worst possible times and forcing her to consider alternative means of spending her time. Both Gerrit and Celka have opinions about the harsh regime they live under, with commonplace rationing and an increasingly brutal internal guard, but its not until Gerrit is forced to confront his superiors' lack of interest in his team's safety that he makes his move, hiding out in the circus where he's immediately discovered by Celka, and beginning a secret exchange between the two of them.

While the setting and the interests of its characters seem permeated with urgency, Weave the Lightning is happy to take things slowly, manoeuvring Gerrit and Celka together and then leaving Gerrit in his secret spot, passing judgement on Celka's various schemes even as he helps out (and, of course, eventually falls in love, because what else is there to do when you're shut in a circus truck with a bunch of snakes and the occasional visit from a cute acrobat? Celka gets more to do - and it helps that her secrets are less artificial than Gerrit's - as she starts taking greater risks and using her abilities to support the rebellion, making calls to bring their family into more dangerous schemes. I could have done without the sudden appearance of a mysterious, handsome knife-throwing second love interest, who adds very little beyond occasionally being good at carrying things, and also having a secretive aura about him, but it's pretty obvious where Celka's heart is at over the whole thing as well, and the connection between Celka and Garrit really helps carry the book.

The other delight here is the magic system, which reads like nothing else I've ever experienced. As well as the storms - which provide energy that allow mages to imbue particular objects with power, even as the mage risks losing themself to harness it - there's also a space called Sousednia, which those with magical talents can enter and move around and manipulate like a constant collective shared dream. Being able to affect the real world from Sousednia is another key part of the magic here, and while it can get confusing, especially if you're not the type of reader who really internalises descriptions and can hold two slightly different places in your head at once, it's also used to interesting effect as Gerrit and Celka develop their respective powers. (There is a primer from the author, if the opening chapters really make your head spin ). All in all, this is a fun series opener that promises plenty more intrigue down the line - though I might be double checking the prominence of the love triangle before I dive into further volumes.