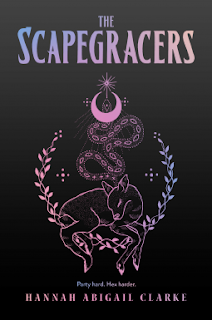 Eloise "Sideways" Pike is an out lesbian, and a practising witch, in a high school where both of those things put her at the bottom of the social heap. That is, until Jing, Yates and Daisy - the coolest girls in school - invite her to perform a magic ritual at one of their parties. What starts out as a one-off party trick almost immediately gets transformed into a friendship, with Sideways and her new friends discovering they all have magical affinity - and that there are plenty of people out there who would happily take that from them, and mould it into a form that they can control. Balancing the sudden change in her social circle, the pressures of sudden covenhood and the challenges of trying to pick up the hot queer girl, Madeleine, who she also met at the party.

The Scapegracers is an odd book in some ways, throwing its audience right into dead deer, kidnappings and magical book heists and only then deigning to sprinkle a bit of high school note-passing and generic teenage drama into the mix. Its external threats are present, and the first half of the book had me pretty concerned for Sideways' safety during one sequence in particular, but the second half of the book almost puts them on hold to instead escalate the tension on the teenage cliques side of things instead, before bringing back the supernatural threats at the very last moment. This feels particularly odd as a tension structure because of something I otherwise enjoyed very much: Sideways' relationship with Jing, Yates and Daisy, while full of quirks and development, is not really a source of conflict as much as it is a challenge of emotional growth for a girl who has been totally used to only looking out for herself. Sure, there's plenty to remind us that the trio aren't objectively wonderful people who deserve power and status more than other kids, but Clarke kicks any potential mean girls tropes to the curb. Instead, he offers up a group of girls who are on top because they're willing to fight for each other, and the friendship they offer to Sideways is genuine. That's underpinned by several other positive relationships, and while there is one significant betrayal, there's a lot more characters with whom Sideways and her crew end on solid (and very queer) ground.

Structural quirks aside (and perhaps for people closer to high school, there's far more tension in these scenes than I originally picked up!), if you're on board for a soap opera-esque ride with a messy but interesting and very backable group of young women, The Scapegracers is well worth sticking with. It does end with things up in the air for a sequel, and I'm very intrigued to see where the next one goes. 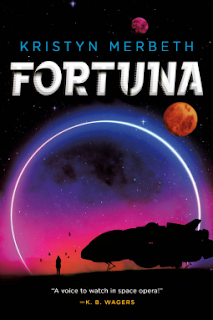 Fortuna is an interplanetary action adventure set in a system whose five habitable planets have all stopped cooperating with each other, introducing strict restrictions and xenophobic policies that make travel between them all but impossible. That's a problem if you want to be a successful smuggling family like the Kaisers, and particularly if, like Scorpia Kaiser, you were born between planets and have no citizenship anywhere. Scorpia and her family - all, thanks to the machinations of her scheming mother, born on different planets with the free movement rights that arrangement confers - run the Fortuna, a largely illegal smuggling operation which Scorpia is desperate to inherit, notwithstanding her problems with alcohol and general reliability and the claim of her older brother Corvus, who has been enlisted into a war on his own home planet for the last three years. Unfortunately, the moment she picks to make her move is the moment the system starts sliding into all-out war, and the Kaisers end up in the crossfire of something much bigger than any one of them.

Fortuna has lots of fun space tropes: a motley crew of smugglers whose hearts eventually end up in the right place, planets that are all a single unique biosphere with different global governments and cultures, a smattering of mysterious alien tech that nobody knows anything about, gun battles, space battles, breakneck runs back to the ship as the ramp lifts, a thief with a heart of gold falling for a princess, and all the mysterious cargo crates you could possibly ask for. It's not afraid to show that the stakes are high for the Kaisers, with a high bodycount and plenty of peril for the main team. There's nothing especially deep here, and Scorpia in particular is too self-destructive to be a particularly endearing protagonist, although when we start to see her from a third person perspective I found my view of her at least became more nuanced. Corvus is far from the relevant action for much of the book, but when he does dock into the main plot, things really start kicking off.  Despite this, Fortuna is a fun, tropey read that kept me entertained throughout and promises some interesting further adventures in its world. 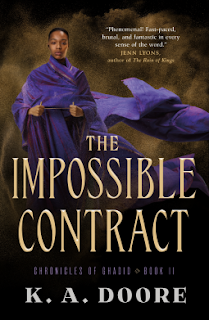 The Impossible Contract by K.A. Doore

The second in the Chronicles of Ghalid trilogy, set around a desert city where water is a precious, rationed currency and a family guild of assassins help to keep the peace by removing morally inconvenient folks from the equation, picks up soon after the first book leaves off, although it could easily stand alone if you don't mind endstate spoilers for the previous book, The Perfect Assassin. It follows a new protagonist, Thana, as she takes on a contract to kill a man who has come from the powerful empire across the desert, claiming that said empire now has jurisdiction over the city. Working for an expansionist foreign power is bad enough, but Heru also appears to be in control of some very dodgy dark magic, and he's also very rude to serving staff; unfortunately, when Thana's first attempt to kill him goes wrong, she ends up having to travel with him and with a very lovely healer called Mo back to the Empire's heart, where she becomes integral in unravelling the mystery of a rival dark mage who might be out to kill them all.

Perhaps it shouldn't have surprised me given the previous volume in the series, but The Impossible Contract relies on its reader accepting the morality of its assassin characters: that there might be something valuable to society in having a secret group of people who can accept contracts to kill, and that society as a whole is capable of regulating how that mechanism is used for something other than political gain of the wealthy. The narrative doesn't present this as entirely unproblematic (for example, Thana tries to keep this a secret from her love interest Mo, because a healer probably wouldn't approve of killing, you know?) but it's never explicitly challenged either, and Thana never has any doubts about whether killing Heru would be the right thing to do until the circumstances of her contract change rather radically in the third act. On the other hand, Thana is perfectly willing to judge Heru for his use of magic to reanimate the dead or bind people to his will by controlling their jaan (spirit), and without giving too much away there are plenty of deaths that are certainly not seen as necessary for societal order. The result is a book whose premise itches, like a contact lens with a grain of dust underneath it, and I couldn't help but read everything with constant calculations in the back of my mind about how I was supposed to feel about all of this, because what was happening and the presentation of the book just weren't lining up. It's a shame, because it's a fun world and queer fantasy is always worth looking out for. The Impossible Contract might have a lot to offer the right reader but I couldn't get it to work out for me.