A potent and timely story about infection, disease, greed, and the power of collective action to deal with large-scale problems 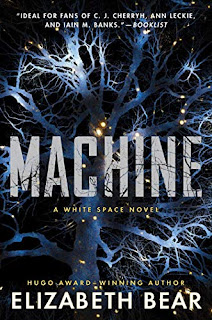 Ancestral Night, in 2019, marked Elizabeth Bear’s return to big wide scale space opera and I was blown away by salvager Halmey Dz’s story of finding a rather strange and amazing prize and discovery that shakes up a lot of preconceptions in her future verse (my review). Memorable characters like the ship AI Singer, and “Mantis Cop” Cheeirilaq completed the novel and made it my favorite novel of the year and I think it is a “definitive and decisive book for SF readers who want to try her work.”

Machine is not a direct sequel to Ancestral Night, although the events of the novel are briefly referenced, and two characters, Cheeirilaq and Singer, do show up in less prominent roles. No, Bear has plenty of stories to tell in this verse and in this novel, Bear decides to tell -- a medical story. Her main character this time is Jens, of the I Race to Seek the Living, an emergency medical rescue vessel of the Synarchy, out of Core General. When the vessel is dispatched from a beacon, they find not only a ship in distress, but also an ancient generation ship, Big Rock Candy Mountain. But the exploration of that ship is not truly in Jens’ purview, and worse, their return afterwards to Core General coincides with strange breakdowns and coincidences. As it becomes clear something is dangerously wrong, it’s up to Jens and her allies to identify it, and fix it before things threaten not only Core General, but the Synarchy itself.

This is the matter of Machine.

Bear calls out in the acknowledgements the inspiration for Core General that was to me delightfully obvious but perhaps newer readers to SF might not be aware of. James White’s Sector General stories and novels describe the adventures of a hospital in space, and Bear’s Core General is clearly a spiritual successor and heir to White’s ideas. Bear of course brings her own sensibilities and ideas to a Hospital in Space but the bones of the homage are there, and the social mores and ideas of White’s novels are updated for modern sensibilities.  This is also done a bit explicitly within the novel itself, as corpsicles found on Big Rock Candy Mountain have some rather archaic, primitive, frankly offensive and un-Synarchy-like ideas about many things. There is a culture clash and some real conflict between Jens and the rest of the Synarchy with Helen, the AI of Big Rock Candy Mountain, and the crew of the ship that they manage to unfreeze and revive.

A feature of Bear’s novels is that many of her protagonists are “Broken, but still good.”. That is something that has been in Bear's novels since the days of Hammered, and if that does not appeal, you are going to have problems engaging with her work. I see so many reviews of Bear's work complain about the falliability and feet of clay of the protagonists. The reviewers do not seem to or do not want to see that Bear's choice is deliberate in using them. Halmey Dz of Ancestral Night extensively used Synarche techniques to improve and stabilize brain chemistry. Dr. Jens, too, is hardly a Heinlenian super protagonist, she has problems, fears, and weaknesses that she has to deal with, her  personality emerging from the first person narrative, and how others regard her and deal with her. As she digs into the central mystery of the book, and as things hit the fan, Jens has a challenge both personal as well as global and running those conflicts in twain is a conveyor belt of personal and station-wide drama that the author leverages effectively and excellently.

But theme is where this novel shines, where the plot shines a light on the themes of the novel and, Bear could not have predicted, themes resonant for a 2020 where we are running rampant with a pandemic. The disease and central problem of the novel is not a viral pandemic (although there are mentions of being worried the corpuscles of the generation ship causing one given how long they have been in space) but an infection of a different but no less dangerous nature. This pandemic allows Bear to explore a variety of themes--the availability of medical care, the responsibility of a community to protect its citizens, the dangers of a stratum of citizens hoarding such care, how a society pays for and supports care for its citizens and, even more subty, the devil’s bargains and tradeoffs that result from such efforts.  There is an overall bigger theme and it is this--that a society owes, should be designed as such, to be directed to the well being of every person  Every person. That, in 2020, is a dangerous and radical notion.  The Synarche is not a utopia, far from it, and less so than Dr. Jens thinks it is as events progress, but it does have a built in social contract that, frankly, the author’s home time and place lacks.

Be you afraid, though, that this novel is a political treatise and nothing more, Machine fuses the worldbuilding and efforts and world of a multispecies hospital with a ticking bomb plot (once that plot gets fully in motion) that provides all the action and adventure beats you want. Even before the ticking bomb, we get exploration of the generation ship, and the hazards of space...but when things really get moving, the novel presents Jens and the others in a variety of high pressure set pieces and situations that keeps the pages turning. A hospital in space, near a huge Black Hole, and having an infection and a station-threatening problem running rampant, is a recipe for drama, action and adventure, and the author leverages setting, plot and character to make those action beats happen. It is a build to that back half of the novel, but the ramp upward is not boring, and when Jens is under the gun, the novel just flew for me.This novel, like the first, uses elements of the mystery chassis to propel the SFnal one, something Bear is awfully adept and long skilled at deploying.

The only real question is -- do you need to read Ancestral Night before reading Machine? Aside from the couple of crossover characters, there isn’t a lot of connective tissue. Ancestral Night does provide additional grounding in the world of the Synarchy, for readers who not want to be dumped into the deep end. And, frankly, I think Ancestral Night, as good as Machine is, is just slightly the better novel overall (but honestly it would take fractional points in our system to tell the difference). So I say, if you have the time, read them both. If you do not, pick up Ancestral Night and if you do, you know will be in good hands for coming to Core General. I still maintain the first novel is the best one volume introduction to Bear’s work. I think this second novel builds on Ancestral Night, but doesn’t quite manage to surpass it. It may be well that the theme of a pandemic, reading it in a pandemic, gave just the slightest welcome taste of lactic acid taste for the novel for me.

Still, give me more White Space novels, Bear. My body is ready.

Bonuses: +1 Strong use of theme really drives the novel.

+1 for the worldbuilding and verve and daring to create a Hospital in Space for the 21st Century.

Penalties: -1 A novel regarding a pandemic may not quite be the novel that you want to read in a pandemic.