Welcome to a special Nerds on Tour edition of Questing in Shorts, featuring anthologies from three different continents for your reading pleasure! 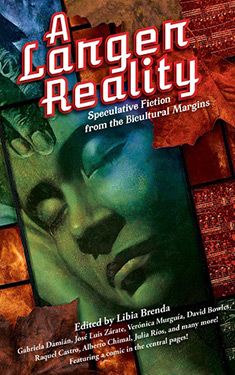 This anthology sprang from the Mexicanx initiative, a fundraising drive led by John Picacio in 2018 to sponsor 50 Mexicanx creators to attend that year's Worldcon in San Jose. In physical form, A Larger Reality is a flipbook, printed from one end in Spanish and the other in English, from Mexican and Mexican-American creators. Sadly, the flipbook formats doesn't quite translate to digital, and one of the stories doesn't make it into this edition too, meaning I wasn't able to read the contribution from Verónica Murgulía. Nevertheless, this anthology packs in twelve intriguing stories that cover a ton of ground, making this feel like a much longer anthology than it is. I was delighted by the graphic offering, "Rhizome" by Libia Brenda and Richard Zela, in which an interviewer turns up to interview their favourite speculative fiction writer, only to be let in to the secrets of time travel. The art style is simple, the panels focusing almost entirely on the two characters, but it's an intriguing dialogue and the expressions and visual cues really help to sell it. I also really appreciated "A Truth Universally Accepted" by Julia Rios, in which a dimension-hopping protagonist comes to grips with a failed relationship over the course of a conversation with a version of a trusted friend in the coffee shop where her ex- and/or would-be lover works. It's a story that lets the relationship itself, and the reader's judgement of it, unfold seamlessly over the story, and I left feeling really touched by its close.

Elsewhere, the anthology touches on themes that stick around for a couple of stories - I assume coincidentally - before morphing into something new. "The Binder" by Angela Lujan and "Ring a Ring 'o Roses" by Raquel Castro, tr. Ruth Clarke both involve young protagonists messing with the supernatural in weird and amusing ways: in "The Binder", a kid fights off a thief trying to steal their new piece of stationery and the experience transforms them into a superhero, fighting for justice for the binders of the world, deciding on their disappointingly narrow place in the world after some false starts and a run-in with another strangely specific superhero, the protagonist. "Ring a Ring 'o Roses" is the story of a child who brings a zombie into school for her kindergarten year, and the cheerfully morbid adventures which she and her murder-pal get up to as they terrorise the school and its inhabitants. I was surprised when I went back to check on this story, how short it is: it definitely stuck in my mind far more than the . Following seamlessly on is "Shoot" by Pepe Rojo, a stream-of-consciousness tale of zombie shoot-em-ups, digital crunch and losing sight of reality. The association-y curation of stories makes this a really fun, coherent set of tales despite the wide range of ground covered. 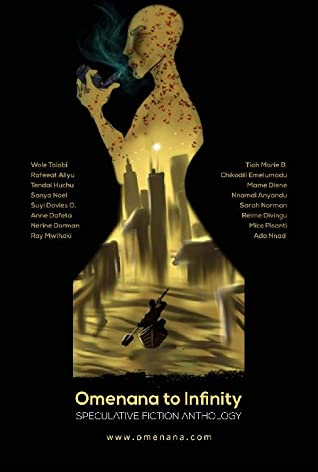 Omenana is a fixture of the speculative short fiction scene, and I was excited when I saw that the African SF storybundle from earlier this year contained the first anthology featuring some of its highlights from its six years of publication. This collection most certainly didn't disappoint - the only story I've previously read is the opener, "A Short History of Migration in Five Fragments of You" by Wole Talabi, which is an excellent intergenerational story about journeys and adaptation rooted in the experience of the transatlantic slave trade and the generations afterwards, so I knew I was in for more good things.

I've been gravitating towards quieter, gentler stories recently and Tiah Marie Beautement's "Memento Mori" really hit my sweet spot in that regard. It's the story of a woman with Ehlers-Danlos syndrome who begins taking visits from Death, who often brings gifts and eventually becomes a part of her family. It's a story that very much begins in media res - we never find out why Death might have started visiting this particular woman in the first place, just that their presence isn't a threat - but the growth of the relationship and the support they provide each other, juxtaposed against the protagonist's experience of disability, makes this a really heartwarming read. While it's a more challenging emotional ride, the payoff of "Tiny Bravery" by Ada Nandi is similarly sweet in how its group of youths affected by genetic mutations find belonging and courage with each other.

I also really appreciated some of the collection's urban fantasy or near-future offerings, from the culinary shenanigans of Suyi Davies Okungbowa's "Of Tarts and New Beginnings" to the dystopian company of Sanya Noel's "The Company". The other story which really stood out on this front was "Sin Eater" by Chikodili Emelumadu, whose protagonist gets a roommate, Nchedo, who ends up dragging her into a world of supernatural violence and justice through her Sin Eating abilities. The relationship between the two characters is fantastic, the protagonist going from terrified bystander to reluctant accomplice to something more, and her point of view comes with an empathy for Nchedo, her relationship with her sisters, and the challenges of her calling which humanises their relationship even as it doesn't sugar coat the horror of what Sin Eating entails in this world (it's gory, and only women can do it). All in all, this was a fantastic sampler for the world of Omenana, and while the anthology may not be available outside of the Storybundle it was presented in, I recommend looking up the table of contents if you're looking for places to start with this free online magazine.

The Book of Shanghai ed. Jin Li and Dai Congrong 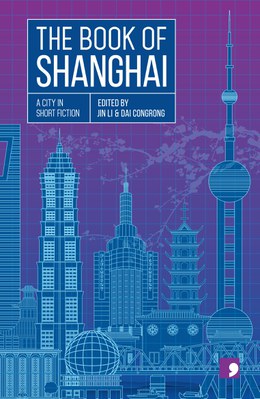 This collection of ten stories, all set in the city in the title, might not be a speculative fiction collection per se, but even beyond stories by Chen Qiufan, Cai Jun and Shen Dacheng which quite definitely are SFF, almost all of these stories feature a sense of mystical impermanence about the lives of characters in Shanghai. All of its characters are thrown into a literary version of a city city where connections can be made and lost in heartbeats, the cost of living can be prohibitive on more than just the financial front, and repressive gender roles are alive and well, particularly for older women. Some of these stories are tragedies, like Wang Zhanhei's "The Story of Ah-Ming" (Tr. Christopher MacDonald), while others, like Ah Fang's Lamp (Wang Anyi tr. Helen Wang) and "Woman Dancing Under Stars" (Teng Xiaolan tr. Yu Yan Chen) offer bittersweet depictions of the challenges and unexpected beauty of city life. The latter story is particularly beautiful, in spite of its slightly uncritical attitude to the gendered expectations on its protagonist and her marriage to her husband. A recently-married woman meets a much older lady, Zhuge at a tea shop, their connection turning into a friendship full of quiet, beautiful moments and realisations, until the protagonist suddenly has to leave the city and accidentally severs their connection. "Snow", by Chen Danyan (tr. Paul Harris), feels almost like a mirror to Teng's story, with its protagonist, Zheng Ling, trying to hold on to a specific ideal of older womanhood while worrying about what people will think of her as a woman, alone, reading a book at a KFC, as the city moves on around her. Unlike Zhuge, Zhen Ling's experience of loneliness - even a temporary one - invokes a state of anxious soul-searching that doesn't really get resolved as the story comes to its close. Loneliness and connection is also a big part of "The Lost" by Fu Yuehui (tr. Carson Ramsdell) in which a man loses his phone - and with it, a substantial portion of his contacts - and grapples not just with the hardware loss but with a sense of isolation and existential angst that doesn't go away once he gets a replacement.

Being the kind of reader I am, the more speculative stories also worked really well for me. It's almost a spoiler to say that "The Novelist in the Attic" by Shen Dacheng (tr. Jack Hargreaves) is one of them, and I certainly didn't see its final twist coming; once it arrived, though, I really couldn't imagine the story being anything else. Cai Jun's "Suzhou River" (tr. Frances Nichol) is a dreamy, slipstreamy delight, with even its more mundane elements - the setup of a clandestine meeting between its protagonist and a mysterious woman called "Z" - feeling strange and uncanny. Rounding out the collection, Chen Qiufan's story (tr. Josh Stenberg) is a confusing, experimental but ultimately fascinating story of what seems to be a singularity of some sort, or at least a breakdown of individual human consciousness, in which some of the sequences were literally written by an AI trained on the writer's style. It's a story I come away from not fully understanding, but that's a great way to end this collection about a city that's bursting with strangeness and transience and incomprehensible happenings, at least from the telling of these authors.