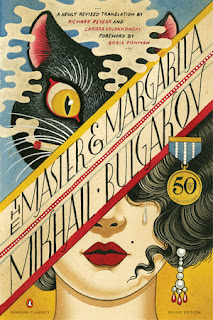 Package Type: Novel
Itinerary: Once upon a time, there was a weird weird world in the East where you had to be constantly on the lookout for foreign saboteurs, where people could disappear in dark cars during the night without a trace and where writers could not publish their work if they weren't members in an association of proletarian writers. And even then, there were things that were just utterly unpublishable -- such books as Master and Margarita by Mikhail Bulgakov.

Bulgakov, known at the time mainly as a playwright (whose plays were often forbidden), wrote and rewrote the satirical fantasy novel (and burned several drafts of it) for the last twelve years of his life which the Soviet authorities had made increasingly difficult. The novel didn't saw publication until 1966, more than 25 years after Bulgakov's death when it quickly became a cult classic. In addition to the official censored version, a more complete samizdat edition started circling the literary underground and was later smuggled out of the country to be published and cherished.

In the novel, an enigmatic foreign professor Woland who specializes in black magic arrives in Moscow. He first interrupts a discussion between an aspiring poet Ivan and an "editor of a highbrow literary magazine and chairman of the management committee of one of the biggest Moscow literary clubs" about the existence of Jesus. He tells the baffled men a lengthy story of Pontius Pilate, the procurator of Judaea who ends up having to order the execution of a curious prophet even if he does not want to. Woland also predicts that the management committee of the literary club will soon lose their chairman because the head of the man he is speaking with will be cut off. Shortly, that indeed happens in a freak tramcar accident. 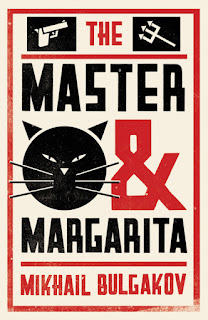 The quirky death sets in motion a series of uncanny events as Woland and his demonic entourage trick and deceive bureaucrats, officials and ordinary Muscovites. First, they manage to get the control of the dead gentleman's apartment (a notable feat during the severe housing shortage). Then they go on to con the managers of the Variety Theatre in which Woland gives a performance of black magic, creating further comic chaos and confusion. Especially the malevolent pig-sized talking cat Behemoth, by far the most memorable character of the novel, is eager to wreak havoc in entertaining ways.

Amidst all the mayhem, the titular master and his broken-hearted lover Margarita are introduced to the reader. The master is a failed writer whose novel on Pontius Pilate will never see the light of day and whose reputation has been demolished by malignant critics. He is locked away in a lunatic asylum next door from Ivan, but Margarita (who only knows that her lover disappeared) is willing to try to get him back by helping Woland organize something of a satanic ball. In the novel, all of it sort of makes sense. 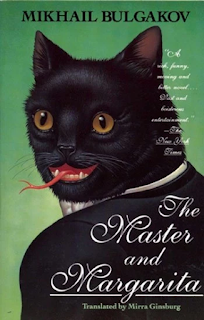 Travel Log: Reading The Master and Margarita 80 years after its completion is a disconcerting experience. You have to not only travel to Moscow but to the Moscow at the height of Stalinism in the 1930s, a place as alien as Mars to most of us. At the time, the novel would have been a death sentence for Bulgakov and his family, but for someone not immersed in the historical context it is not easy to pinpoint why exactly. The redactions of the first official publication (often printed in italics in western editions) are quite baffling as well. Was the fact that Margarita was naked when she turned into an invisible witch and flew with a broom really so subversive in the 1966? I guess it was. On the other side of the Iron Curtain, though, science fiction writers were writing stories like Why I Want to Fuck Ronald Reagan.

Bulgakov knew that the work could not be published, but he kept working on it and rewrote it after destroying it several times. The novel within the novel that the master is working on is obviously a reflection on the work that contains it. One of the most oft-cited lines from the novel -- "Manuscripts don't burn" -- comments on this and became the motto of the samizdat underground. Master's novel about Pontius Pilate is burnt as well, but the satanic Woland saves it, and its narrative refuses to stay inside the manuscript. Rather, a big chunk of it is told by Woland in the beginning of the novel, and another segment becomes the dream of Ivan as when he sleeps next to the master in the asylum.

Other elements of the narrative are autobiographical as well. Bulgakov, too, had to suffer unreasonable attacks by the Soviet press and it is easy to consider the militant reviewers who tear the master to shreds as literary payback. His fiercest critics called for an attack on "Bulgakovism" in the same way as the hostile reviewer Lavrovich is propagating for striking hard at "Pilatism" of the master's novel. Most of his plays were forbidden when he was alive and he was able to find work only through the personal intervention by Stalin who reportedly liked some of his plays. 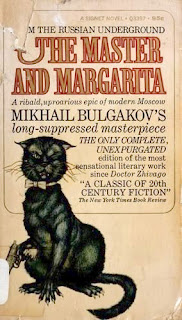 However, the rabbithole of learning more about Bulgakov's life and experiences has so much gravity that it quickly starts to collapse on itself. Master and Margarita is a light, funny and sarcastic book that can be deciphered in a myriad of ways, and even the specialists have not found a consensus on how it should be read. Some have suggested that the character of the master is a reference to Nikolai Gogol who famously burned the second part of Dead Souls while others think he is Maksim Gorky. The devilish Woland can be seen as a stand-in for Stalin, Lenin, Jesus or God, but the most entertaining aspect is that the meanings are shifting and unstable.

Compare it to George Orwell's masterpiece Animal Farm which Orwell wrote not long after Bulgakov had finished Master and Margarita. Both are hallmarks of political fantasy, but whereas Animal Farm offers neat meanings and unambigous anti-Stalinist polemics, Bulgakov's anti-Stalinism is as ambigous as it gets. For example: A bureaucrat has stepped out of his suit and left it sitting on his desk in his stead, going through the papers and making decisions.

Funny as hell, if you can bring yourself to enjoy absurd, nihilistic slapstick. If you can't, the novel is notable for hundreds of pieces of amazing cover art, most featuring cats.