Reissued in a new edition for the first time in decades, this World Fantasy Award winning novel remains a classic of alternate fantasy historical fiction. 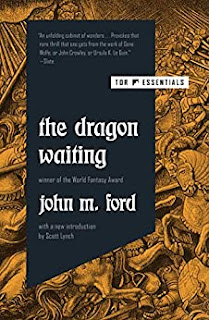 In a 15th century world that is not our world, a world where magic exists, where Christianity did not overwhelm the pagan gods of Greece, Rome, the Middle East and Northern Europe. A world where the Eastern Roman Empire remains strong, and grasping. A world where travelers meeting at an Inn might yet change the fate of a corner of the world--and come to support a man who, with their help, might become Richard III.

This is John M Ford’s novel The Dragon Waiting, now back in print.

The Dragon Waiting is a pinnacle of Ford’s work, perhaps the richest of all his many talented and varied oeuvre, the most Fordian of all of his writings, and yet, it is the novel that, if I were to be asked to hand one of his works (in print or out) to a person, I would unquestioningly hand to them first. It is the novel where I entered Ford’s oeuvre, and it is no coincidence, I think, that it is the first novel of his out of print to be brought back into light for modern readers.

What is the novel about, then? What’s the big deal? What’s going on?  It’s an alternate 15th century. A lot of southern Europe is swallowed by the ever-strong Byzantine Empire, and its always looking for advantage. And meanwhile, in England, the Wars of the Roses are leading a man named Richard of Gloucester on a path toward a crown. Such a man, such a King might be counterbalance, as Byzantium schemes and maneuvers to grasp for additional power in Italy, in France, and elsewhere. And so a group of characters whom we meet across Europe, find themselves in a snowbound Inn in the Alps, come together, and decide to work together against the power of Byzantium. All of them have their reasons to do so, all of them have secrets, lies, hidden agendas of mind and heart, all of them very different people, brought together to, if not change a world, give it a good push in a direction.

And such a quartet of characters. The novel introduces them all in turn, and brings them together in that Inn to meet, form common cause and sally forth together. The whole “You meet in a tavern” cliche in fantasy? This is the definitive example of that, but Ford was a clever writer, and we care and are invested in each of the characters separately before we get them to team up . Hywel, a Welsh worker of magic, although when we meet him, the opening of the book and set some time before the main run of the novel, he doesn’t know he has the Talent. Dimitrios, a swordsman son of a Byzanine governor in partitioned Gaul (divided into two, not three parts, sorry Julius), trained in the sword, having to leave his life and world after the murder of his father. Cynthia Ricci, a doctor (a female doctor, a rara avis!) at the court of Lorenzo the Magnificent, also sent on the run after Byzantine intrigues in Florence make her position untenable. And finally Gregory, a Duke of Germany, with sanguinary needs. They contrast and clash with each other, form strong bonds and relationships, and center and drive the plotting once they come together.

The world and milieu that the author places these characters, and their revels in, is a fascinating one. We only see what we can see, infer much else, and the rest is a hazy illusion that invites the reader to imagine, and wonder. Even given the survival and strength of the Byzantine Empire, with Gaul divided between it and England, this is a late 15th century world much like ours, with many familiar historical personages taking the stage, with a history that has rhymed as much as it has diverged a bit from our own. I think of Mary Gentle’s Ash a Secret History as an example of how a later writer followed in these footsteps. To be clear, this is not a Turtledovian rigorously mapped out point of divergence and changes, although in the after mater, Ford does mention a few of the changes. Those really are rationalizations for the world he presents more than anything. So those who want a rigorous AH are going to be sorely disappointed, that was and is not Ford’s goal here. It FEELS like an authentic alternate medieval world where Christianity never came to dominance,. And being a poet at heart(and he wrote SUCH poetry), Ford is trying to make you feel with his language and worldbuilding.

And such language! The language, the verve, the execution, the “Mike you clever bastard!” moments that you will discover again and again is where the novel shines. The late Gene Wolfe is his rival for the subtle cleverness and “pay attention!” necessity of reading the text, and if you, friend, are a reader who loves Wolfe for the narrative and poetically high literary density and high-wire act of his words, then Ford is your cup of tea and you will, I confidently predict, fall into his work. Wolfe was far more engaged with unusual words than Ford was and is, but if you think about how careful it takes to read Wolfe’s work to really get a full sense of what is going on, that is the same sort of techniques you need to tackle The Dragon Waiting. It had been a decade since I read it, and while I had remembered the broad outlines of the story, and some key passages, there was much rediscovery for me in this read. The book is not, then a breezy read, its a book that for all of its relative shortness (less than 400 pages) feels and weighs much more on the mind, the soul and the heart. This is a novel to immerse in, but to realize that you might be in there for a while, and best get comfy. This is, if you will forgive me, a novel to read while in a snowbound inn in the alps. (life goals of mine include for this very event to occur, and now maybe, with my digital version, I could).

There are no sequels or followups, even if this is a world that cries, cried, for many more novels. It’s an alternate magical history with such potential, but that potential is unrealized. The talent that was Mike Ford meant that he wrote broadly, in a number of SFF subgenres. Proto cyberpunk (Web of Angels). Urban Fantasy (The Last Hot Time). Star Trek Novels (How Much for Just the Planet and The Final Reflection) . Space Opera (Princes of the Air), and more. Not enough, as it so happens, not nearly enough. And much of it is far far out of print. But now with The Dragon Waiting (and, hopefully, more to come), the work of a author who has, even if you did not know it, influenced many of the authors you read today (see the introduction to this book by Scott Lynch), is coming into print. Start here, and envelop yourself in the worlds of John M Ford. Here is your chance, your key, to unlock the door into his words and work. Go read The Dragon Waiting.

Bonuses: +1 For the best “You meet in a tavern” scene in all of Fantasy

Penalties: -1 First time readers may be put off by a book that truly requires careful, Wolfean reading to get and grok all of it.