Interview: Kacen Callender, author of Queen of the Conquered and King of the Rising 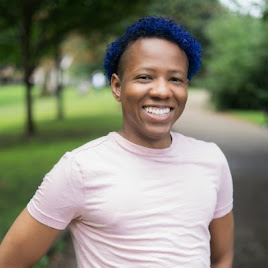 Happy book birthday to Kacen Callender's King of the Rising, which releases today!  The sequel to Queen of the Conquered,  King of the Rising is the incredible conclusion to Callender's Islands of Blood and Storm duology, a Carribean-inspired fantasy that deals with colonialism, revenge,  and the power of revolution.

Callender is known for their award winning children's and young adult novels, most notably Hurricane Child (winner of a 2019 Stonewall Award and a 2019 Lambda Literary Award) and King of the Dragonflies (winner of a 2020 National Book Award).  Queen of the Conquered was their first adult fantasy novel, and won the 2020 World Fantasy Award. Callender has become known for writing unflinching narratives that pull no punches when it comes to discussing race, colonialism,slavery,  oppression, assimilation, LGBTQ+, and sexuality.

Born and raised in St. Thomas of the US Virgin Islands, Callender now resides in Philadelphia. You can learn more about their work by following them on twitter @KacenCallender and by visiting their website  KacenCallender.com.  Callender was kind enough to answer my questions about the inspirations behind the Islands of Blood and Storm books, the magic system in the series,  writing for different age groups, and more.

Kacen Callender: It’s a bit difficult to give the elevator pitch without spoiling both books, but in a nutshell, this duology is a Caribbean-inspired fantasy about colonization as one woman seeks revenge and power from the white colonizers of her home islands, and one man seeks freedom for his people.

NOAF: What were some of your inspirations for this series?

KC: I wanted to see a fantasy novel that was about the Caribbean and that tackled real issues of not only colonization but modern day questions of what it means to be an oppressed person with privilege, and whether we can continue on a path of attempted assimilation to the detriment and abandonment of our own people. (The answer is no.)

NAOF: The protagonist of Queen of the Conquered, Sigourney Rose, has the ability to control minds. How does magic work in this world? Does everyone have the potential to be a magic user, or only the privileged few?

KC: There is a magic system called kraft, a symbol for power both literally and figuratively—people with kraft can have random abilities, from hearing the spirits of the dead to seeing the future, to controlling minds and bodies, like Sigourney can. Everyone has the potential for kraft in this world, but the colonizers, the Fjern, claim it belongs only to them by divine right, and so will execute any of Sigourney’s people, the islanders, who are found with kraft. This is meant to parallel our own world as well, where everyone has natural ability and talent, but only a privileged few are allowed to capitalize on this ability, while others are punished for their talents, their power taken. 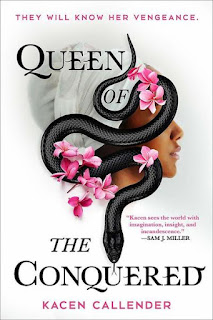 NOAF: The second book in the series, King of the Rising, switches to Løren's point of view. Why switch? Why not tell more of Sigourney's story?

KC: This is another question that’s difficult to answer without spoiling the first book, but I’ll try my best: Queen of the Conquered and King of the Rising are about the consequences of refusing to learn from mistakes, refusing to grow and change. Because of this, when Sigourney refused to learn, refused to change and grow, her story ended with the first novel. If this was a series about learning, growing, changing for the better, then the second book might have been from her perspective as she made necessary changes. Instead, I went to Løren’s perspective because I wanted to show the cause and effect in their relationship and continue the conversation of capitalism vs. community with the second book’s theme in their personal struggle for power.

NOAF: What scene was your favorite to write? Without giving any spoilers, can you tell us which scene was the hardest to write?

KC: It feels odd to say that I have a favorite scene in two books that were very difficult to write, but I probably most enjoyed the moments when Løren saw visions of his mother in what was essentially a spirit world, and feeling the power and knowledge that, no matter what happened in his story, there would eventually be justice and freedom.

For scenes that were hardest to write, it was really anything with violence—I don’t want to show graphic violence to be gratuitous or for shock factor, but I also didn’t want to play down the cruelty and brutality of slavery, in a novel that’s about slavery and colonization. I wanted to be sure there was an appropriate balance throughout. 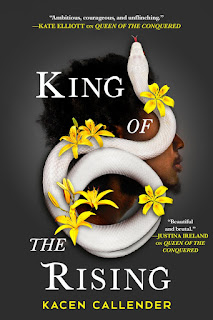 NOAF: You write contemporary fiction for middle grade and young adult readers, and fantasy for adults. When you get an idea for a story, how do you know if it's destined to become a middle grade, young adult, or adult book? Which age group do you most enjoy writing for?

KC: Each age group that I write for has a specific purpose, and I feel a calling in writing for all people, no matter their age. (There are also plenty of adults who read my middle grade and young adult books, so it’s difficult to try to split up the age groups anyway—they can sometimes feel arbitrary when adults, for example, read middle grade books for their own inner child healing, or young adult to live the teen years they wish they had for themselves.) But, when I get an idea for a story, it can sometimes be difficult to know which age group it’ll end up in because the splitting of age categories is so based in marketing and publicity strategy, which isn’t exactly my forte.

NOAF: You mention on your website that you enjoy playing RPG games. What are some of your recent favorites?

KC: I’ve been spending my days recently playing Dragon Age II for the first time! Other favorites are, of course, anything Zelda, along with Skyrim.

NOAF: Thank you so much Kacen!