Elizabeth Bear’s Ancestral Night provides Big Smart Objects, interesting aliens, a gigantic canvas, and a strong first person narrative to lay a marker as some of the best Space Opera being written today. 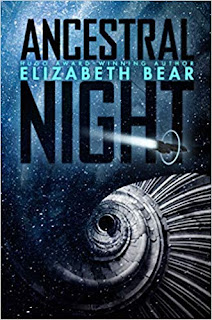 Haimey DZ is a salvager. Along with her business partner Connla, their spaceship’s AI, Singer,and a pair of cats,  they make a living in the far future by finding ancient wrecks, and salvaging information and items of interest. When Haimey and company find an ancient ship, and some even weirder tech that is derived from a rather distressing source, their find is interrupted by interlopers. In a race to find what the piece of technology that attaches to Haimey means and what it can really do, Haimey and crew have a long ranging adventure ahead.

“Mantis Cop” Cheeirilaq is also soon on the case, and if he is ally, Javert, or has an agenda of his own, Haimey doesn’t know. He Is rather determined, though, with a tenacity that Prince Corwin of Amber might admire. Oh and there is a  sexy space pirate is determined to get Haimey and that technology  by any means necessary.

This and a lot more comprises story of Elizabeth Bear’s Ancestral Night.

Bear’s novels, for me, always really focus on characters. They are frequently broken, and in interesting ways, and the precise way that Haimey is broken seems clear at first in the novel. However, as the plot unfolds, Haimey herself starts to learn and question aspects of her history and even personality. In a world, and even more importantly, a culture and polity that is willing to, and does adjust personality and memory with far greater ease than taking pharmaceuticals may have well indeed adjusted Haimey more than she ever knew. In addition to all the worldbuilding and revelations on larger scales, Ancestral Night really is a journey of discovery and investigation by Haimey into her own past. It’s not a journey that she particularly wants to make, the introspection is painful, but we as readers are brought into that pain and discomfort as Haimey, in the midst of everyone else going on, has to face herself and who she really is.

What’s more, this first person deep dive lets Bear do a lot of exploration of “persons versus society” and explores the aspects of the galactic society that she has built, in relation to the individual, namely Haimey. Her future galactic civilization has advantages over our own, but it is no utopia, and the first person lens and personality dives lets her interrogate the society she has built, and by extension, interrogates our own.

While many readers will come for that deep dive into character, other readers will find the worldbuilding and the vision of a galactic future to be equally if not even more compelling. I was surprised right off that this novel was set in the same verse as the worldship series Jacob’s Ladder. (Dust, Chill, Grail). However, in Ancestral Night, we travel across the galaxy, wind up on multiple stations and ships, and get a much wider canvas. The themes of cultural divergence and the conflicts between cultures are carried from Grail to here, but setting it up as a conflict between the pirates and disaffected of the Freeport communities versus the Synarchy that is the predominant political system in the galaxy.  Plus there are ancient elder race artifacts, a trip to a supermassive black hole, secrets written  into the fabric of the universe, big smart (as opposed to dumb) objects and a lot more for readers to find. And I didn’t even mention the diversity of aliens, and the thought that Bear puts into a multi-species polity. The aforementioned Cheeirilaq is definitely my breakout favorite of these.

Integrating the personal story of Haimey and the larger scale space opera themes, and pieces of the world is the ultimate challenge and writing tightrope that Bear attempts here. It feels like the author is trying to appeal to two separate interest spheres within science fiction--the big damn sense of wonder wide open worldbuilding that stirs the heart, and the deep dive into character, psychology, personality and introspection.

The novel that Ancestral Night brings to mind, then, for me, is Frederik Pohl’s Gateway. That classic novel also gives us a first person protagonist, Robin Broadhead. While the novel gives us spacecraft programmed to go to *somewhere*, a devastated earth, a mysterious elder race (the Heechee) and a huge canvas. (Also, like Ancestral Night, a black hole is an important feature of the worldbuilding). But there is a deep focus in Gateway on the inner emotional life and the psychology of the protagonist, the interior life of Robin IS the point. Exploring Robin’s past and what really happened and how it’s made Robin who he is today--that very much resonates with parts of Bear’s novel. Ancestral Night doesn’t go that far in being a bottle episode, but there is plenty of Haimey coming to grips with her past even as events swirl around her and she has to fight for her future.

In a season, perhaps a year, that has exciting Space Opera on the menu, Elizabeth Bear’s Ancestral Night stands tall as a marker as to why Bear is one of the leading writers in Science Fiction and Fantasy today. For a long time, I’ve recommended her Carnival as a novel for those interested in Bear’s fiction but not quite sure where to start. I think that, between canvas, character, story, and writing, This novel is a definitive and decisive book for SF readers who want to try her work. Given how deeply it is in dialogue with the themes and ideas of SF, on character and worldbuilding, I don’t think that the novel would work for a reader new to SF. This is not a novel to hand to a person just off the streets of mundania and walking through the portal into the realms of science fiction. But for those who already in the White Space of SFF, this is a novel for anyone remotely interested in the Space Opera being written today.

Penalties: -1 this is a novel that is best read by people already well versed in SF and Space Opera to truly appreciate the nuance of the novel