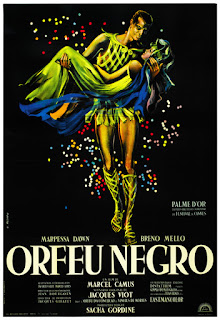 Package Type: Film
Itinerary: The top-line summary of Orfeu Negro is simply that the ancient myth of Orpheus and Eurydice plays out against the backdrop of the Carnival celebration in Rio de Janeiro. In this film, Orpheus is a singer who works as a tram-car driver and lives in one of the favelas of Rio, high up on a hillside surrounding the urban center of the city. His  girlfriend, Mira, is determined to steamroll him to the altar before he fully realizes what's happening, but stepping into the 36-hour window between Mira rushing Orpheus to the marriage license office and any potential ceremony, is Eurydice.
She is the cousin of Orpheus' neighbor, Serafina, and has fled her family farm in terror, convinced that a man there is trying to kill her. Orpheus, Mira, Serafina, and the entire favela are preparing for Carnival, where their samba school will be performing for thousands of people. Even though Eurydice has arrived with nothing, Serafina decides she needs to participate in Carnival, with a beautiful costume and as a part of the whole experience. It is during the run-up to that night's massive rehearsal that Orpheus and Eurydice begin to feel a profound attraction for one another, almost like fate, that they cannot explain. But at the rehearsal, a dark force looms up out of the crowd in the form of a masked man that we immediately understand is the reason why Eurydice fled her home.
Thus begins the race of Orpheus and Eurydice against the inevitable. If the viewer is at all familiar with the myth of Orpheus and Eurydice, the story beats will be familiar: Death will take Eurydice, Orpheus will descend into the Underworld to try to bring her back, he will be met with the bargain that she can return with him, but only if he never looks at her again. He will not be able to resist, and in turning, he will lose his love forever.
These familiar beats are rendered here in a combination of bureaucratic nightmare and indifference, a poetic blurring of the real and the supernatural, and traditional African religious ceremonial practices. That the film ends in tragedy is a foregone conclusion, but the journey getting there is a visual delight.

Travel Log: Discussing Orfeu Negro is challenging because there are a number of issues in tension, not all of them on screen. By this I mean 1) the quality of the filmmaking and the performances, 2) the cultural impact of the movie in 1959 and beyond, 3) the attitudes and contributions of the people involved in the movie, and 4) how each individual viewer reconciles these tensions.
To start with, the film is a visual and sonic marvel. With the exception of Marpessa Dawn, the American expat who plays Eurydice, the other performers are Brazilian, and most belonged to an experimental theatre group in Rio. The performances are wonderful, exploding with life and movement, and the colors of the film are lyrical and poignant. It is simply a joy to look at. Similarly, the soundtrack, created by Antonio Carlos Jobim and Luiz Bonfa, essentially created what would become known as Bossa Nova music by simplifying the traditional samba forms of Brazilian music. From a filmmaking standpoint, Orfeu Negro more than earns its classic status.
Especially in the music world, the impact of Orfeu Nergo was profound and far-reaching. Antonio Carlos Jobim is a composer and songwriter best known for his collaborations with guitarist Jao Gilberto, which in 1959 were still yet to come. For instance, the two of them went on to write, shortly after this movie, "The Girl from Ipanema," now one of the most-recorded songs in history. The movie and its soundtrack helped kick off an explosion of interest in Brazil and Brazilian culture that swelled the Brazilian tourist economy and led to bossa nova-inspired explosion in the American jazz world. Albums such as Getz/Gilberto, featuring American saxophonist Stan Getz alongside Jobim and Gilberto, became some of the best-selling albums of the 1960s. I must confess that I am not an unbiased observer here. When I was working on illustrating my children's book, Getz/Gilberto was my go-to soundtrack. So experiencing the proto-bossa nova in Orfeu Negro was, for me, deeply wonderful.
It is crucial, I think, when discussing this movie to point out that it is not a Brazilian film. It's a French film, directed by a Frenchman, featuring a Brazilian cast and Brazilian locations. The Orpheus myth at the time seems to have been something of a French staple, with Jean Cocteau's surrealist masterpiece Orpheus hitting screens earlier in the decade. And film historians, Brazilian artists, and scholars have pointed out since the movie's release that the director, Marcel Camus, seems to fetishize Blackness in the film in a way that Brazilian society did not, and that in his comments outside of the film, he explicitly equated Blackness to a kind of primitivism. So what we have onscreen, then, is a view of Rio, Carnival, and the all-Black cast filtered through the lens of a White, continental, and undoubtedly biased Frenchman. The source material for the movie is a Brazilian play that places the Orpheus myth in the favelas, not specifically situating it within Blackness. The interviews included on the Criterion Collection edition of the movie shed a lot of light on the various conversations that have taken place around the film in the decades since its release. Charitable interpretations hold that, despite his ugly personal beliefs, Camus made a film that was in fact more respectful and humane than he was, himself. So these onscreen representations of Brazil, Carnival, and the favelas take on a distinctly outsider hue. The same joyful, effervescent performances that are so endearing have also suggested for many a fundamental misunderstanding of the movie's subject. As one Brazilian scholar put it, "how happy can you be living in a house made out of cardboard?"
What we are left with, then, depends I think on us, as audience members. How we synthesize these different tensions will shape our experience of the film, but I believe, personally, that it's a movie worth watching and thinking about specifically because all of these elements are locked in a tug-of-war. It speaks to colonialism, appropriation, celebration, mythmaking, opportunity, and representation, and it does so in complex ways that go beyond the intentions of the filmmakers themselves. For instance: Camus focuses his camera on the favelas and the ecstatic crowds at Carnival, but in the frame we also see the high-rises and commercial centers of 1959 Rio de Janeiro. Whatever his intention, what we are able to perceive is a complex city navigating modernity and tradition, alongside massive inequality, awash in celebrations of life while engaged in a tooth-by-nail struggle to hold onto it. So this film from 1959 winds up having something to say about a myth that has been with us for nearly 3000 years, while also speaking into our present moment.

Posted by Vance K — cult film reviewer and co-editor of nerds of a feather since 2012, fan of bossa nova music by way of The Doors, oddly enough.
Posted by vkotrla at 12:00:00 AM