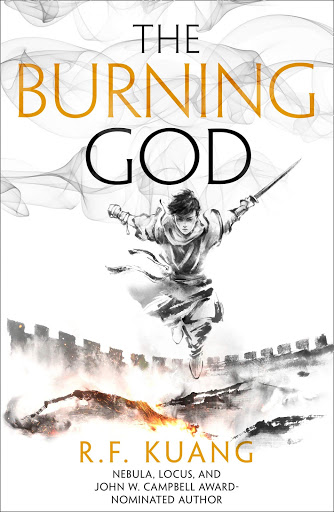 Look, if you're here reading this review of the third book in a trilogy, especially one that's had the reach and popularity of The Poppy War trilogy, one of three things is probably true: you've read the previous books in the series and are looking to confirm whether the last one is going to live up to the expectations you've already developed about the series; you've avoided or bounced off earlier books and are wondering if my opinions are going to change your mind about if the series is for you; or you've read the book and you're wondering if I can a) contextualise what just happened or b) otherwise add to your reading experience with my #opinions. Let me put you all out of your misery quickly: Group A, the answer is yes, Group B, the answer is no, and Group C, I have no idea but I'll do my best for you. The Burning God brings to a close a very particular series in a way that stays very true to its core themes and aesthetic. If its what you're here for, you're going to like this one very much.

The Burning God picks up right where The Dragon Republic leaves off, with Fang Runin - a shaman able to harness the power of a super destructive god called the Phoenix - having thrown in her lot with a Southern Rebellion after being betrayed by the other rebellion forces she had helped to overthrow the Empress Su Daji. From that starting point, The Burning God proceeds to cover so much ground that it's hard to know where the scene-setting stops and the spoilers begin: there's the return to reclaim her southern home from foreign occupation by the remnants of the Mugenese troops who Rin and co. fought off in The Poppy War; her attempts to build relationships with rebel leaders who refuse to see her as anything more than an inconveniently powerful young girl; the reconnection with former enemy powers and the attempt to harness them to her cause; and of course, the reckoning with the forces of the Dragon Province, led by sometimes-ally mostly-enemy awkwardly-also-a-love-interest fellow Sineguard graduate Yin Nezha. Also thrown into the mix is the ongoing agenda of the Hesperians, the more technologically advanced, scientifically racist foreign power which has thrown its lot in with the Dragon's elites in order to further their own religious and cultural agenda. And, of course, the effects of the previous two books, including Rin's connections with the Cike, the Empire's now decimated shaman forces, her reckoning with her legacy as the last surviving descendent of the Speerly ethnic group, and her relationships with the few remaining allies she has from her time at the Sineguard academy. Getting through all of that is a serious undertaking, and while none of the events of The Burning God feel rushed, per se, there's certainly a relentless sense of action driving things through to their conclusion, and there were certainly emotional moments (particularly those involving Chen Kitay, Rin's oldest friend and ally) which could have benefitted from more space to breathe. I also suspect that the amount of shifting scenery in The Burning God was what allowed a transparent Tibet parallel called "Dog Province", complete with a reference to its people as "Dogs", to slip through sensitivity reading without challenge: an uncomfortable moment of unexamined, throwaway chauvinism that sailed far too close to oppression in our own world for my liking.

In-keeping with the rest of the trilogy, there are historical parallels here to the war between the Nationalist and the Communists, including a surprisingly understated (mild Cannibalism notwithstanding) version of the Long March from Rin's forces. There's also depictions of famine brought on by the war, and scenes of villagers turning on and punishing collaborators after occupation in various creatively brutal ways. Most of the descriptive brutality takes place at the beginning of the book, and I definitely felt there was a difference between the various horrors depicted, particularly towards the end: large-scale destruction seems to pass almost without comment from Rin, entire armies and cities just disappearing into the maw of destruction, whereas the pain and death inflicted on individuals outside the main battlefields is far more detailed and emotionally affecting. It's a difference that's very much inkeeping with Rin's emotional arc, as she progresses from a frustrated general trying to undo the horrors of war in her own home, to a leader drawn to increasingly bold and high-risk tactics to turn the tables on her enemies and secure herself enough power to do things differently. To me, it quickly became clear that it's Rin's emotional journey that provides the storytelling beats here rather than any hope of systemic change. Readers who know my tastes will know this isn't really where I personally wanted things to go, but that's really besides the point: The Burning God has always been clear that this is Rin's story, albeit one that draws heavily on its backdrop to inform who Rin is and why her journey takes place in the way that it does.

The way that this series takes on historical events in Sino-Japanese history has been extensively covered elsewhere, and I recommend this particular primer to understand where Kuang draws parallels not just from 19th and 20th century events but from classical Chinese stories as well. Having studied a bit of 20th century Chinese politics, what intrigued me most about the character work in The Burning God is how, more so than the other two books in the series, it plays with parallels between the characters of the series and the major historical figures whose cults of personality dominated what came next in our own history. Rin's attempts to establish herself as a leader in the rebellion - first one among many, and later as its head - are easy to compare to Mao Zedong, leader of the Chinese communist forces and ruler of the People's Republic of China from the end of the civil war until until his death in 1976. But Rin has been through a great deal of other experiences, not least those shaped by her identity as a Speerly and a woman, both aspects which are absent in her historical counterpart. It's that tension between the historical record and the character's experience that made The Burning God's ultimate dilemma so compelling: when faced with a choice between embracing the feeling of total power over her people bestowed upon her by her god, or following the forgotten heroes of her own heritage along a different path, it's impossible to know what Rin will do until the book's last, dramatic pages.

I can't call The Burning God satisfying - it's not meant to be. It tells the story of a society that was broken from the very beginning, and whose subsequent experiences have only driven it further into ruin, and of a character whose attempt to escape poverty within that society turns into a desperate, miserable struggle for survival that was never going to turn out well. I come away from the Poppy War feeling I've read an important series, one that is likely to be talked about for a long time to come, and which readers should go into with their eyes open to the difficult subject matter it covers and the historical context on which it draws. For those who have been waiting for this moment: you're not going to be disappointed, but you are going to need a calming beverage and something to cuddle afterwards. Good luck.

Bonuses: +1 character work that blurs the lines of historical events and the book's own powerful mythology to great effect

Penalties: -1 There's so much ground to cover that some secondary characters don't get much time to breathe