A new fantasy series in a war-torn Republic, where old supernatural threats are as dangerous as the political maneuverings that threaten all sides of the conflict. 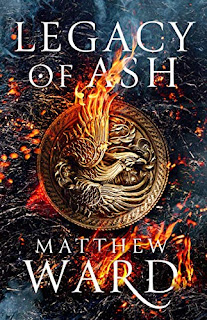 Duke Josiri Trelan and his sister Calenne are the daughters of a rebel.Decades ago, their mother raised a banner of revolution against the Republic of Tressia, only for it to be bloodily cut down. Rather than death, or exile, their punishment has been to magically enclose them on their estate, a unique form of house arrest. The Southshires around them still remember the Phoenix their mother, and perhaps the South will yet rise again. But when scions of the huge Hadari Empire need a short, glorious war to cement their position in Hadari politics, Tressia looks like a tempting target. The Southshires are right in the path of conquest. And the best person to help the Southshires? Vikor Akadra, the man who killed Josiri and Calenne’s mother.

Oh, and several Gods (or at the very least, supernatural beings of some potence)  have plans for various people caught in this conflict. And someone, something darker, long thought gone, as well is stirring.

This is the story of Matthew Ward’s Legacy of Ash

In many respects, this is a down the middle straight fast pitch of an epic fantasy. A thick, wide scale book, Kingdom level politics and conflicts, multiple points of view, a heaping of magic, and lots of characters in conflict, especially with themselves and each other. I had picked this book up to read specifically because I was looking for a form I was well comfortable and familiar with. Although Ward is not an author I had ever read before, I was looking for an experience that was well within my comfort zone for usual reading. And I got that in Legacy of Ash in spades. This is a well executed epic fantasy of a type I’ve been reading for decades. Sometimes you want the classic form.

What I got beyond that, as always, was me finding resonance with other authors, and seeing what Ward brings that is new to the party. The touchstones for the setting, and worldbuilding and overall feel of the magical setup for me center David Mealing’s Ascension Cycle, Sarah Kozloff’s Queen tetralogy,  and R S Ford’s War of the Archons. Ward is not as grimdark as Ford, and the Republican politics and the lack of the “Frontier” mentality make it a distinct voice from Mealing. It’s not the heroic mindset of Kosloff, either. But all three have that squabbling between earthly powers even as supernatural ones lend a hand, sometimes on their own, and sometimes clearly with agendas that cross with each other. Readers who enjoyed one or more of those series will find much to favor here in Legacy of Ash, and readers who enjoy Legacy of Ash can find these books as interesting continuation points in different epic fantastical directions.

The worldbuilding with Gods as mentioned above has resonances with the work of other authors. Ward does some clever twists of his own, however. The Gods/supernatural beings are mysterious, have agendas, manipulate their mortals and act in seemingly capricious ways. There is definitely a sense of an iceberg here, meeting the Raven, Lunastra/Ashana (I do appreciate the very polytheistic touch of having Gods with multiple names for different nations and peoples) and the Huntsman give the sense (as well as some other hints) that they are not the only Powers, but they are the ones involved with the narrative at current. I get a sense that the author is laying down the background for a greater and larger conflict between these powers.

Technological magic is a neat bit of invention as well. The Republic has two types of magical warriors, the humanoid Kraikons and the lion-like Simarka. They are pretty much similar to technomagical golems, but their construction and control and who and why they are built (which becomes very plot relevant) gives the action and war sequences an extra flair and edge. They definitely can turn the tide of battle, but Ward carefully makes them only one important element to a battle, and not an overwhelming factor.

Expanding on that, the physical conflicts, battles and otherwise, is where a lot of the story strength is spent and spent well. With the theme of a impending invasion by the neighboting, dominant Empire and the internal conflict within the Republic, complete with insurgency, and the very violent, Renaissance level world means that there are action sequences that run from duels in a street all the way to set piece battles. The latter is particularly well done, showing the ebb and flow of war and its fortunes, flaws and follies. The pulse pounding roar of physical action is where the narrative kicks into overdrive, and all of the point of view characters (and in at least one case very unexpectedly) get their turns to shine, or at least get dunked in the experience. War is hell, and this book makes no bones about it and secondary characters often have a shockingly short but realistic  life expectancy.

The other strength of the book, and it feels really relevant for 2020, is the politics. There is a car crash sort of viewing of the politics in the novel as people do questionable things, fail to trust, fail not to trust and hold onto power by some very bad or at least questionable things. It feels like a metaphor for our world today and in a real way it was comforting to fall into the travails of the Tressian Republic and their political issues as an escape from contemporary events. The antagonists have an agenda, and for all of their evil, and crossing the moral event horizon, the path of their evil makes sense rather than just being random mustache twirling. The book has a lot to say about the uses of power, about who and what to be loyal to, and the consequences of that loyalty.

One thing that I think is a real weakness of the book, somewhat at odds with its door stopper length, is that some of its pacing is too fast and perfunctory. There is a lot of plot here in the single volume, an entire duology in a single volume. That’s fine as far as it goes, but the gear shifting and the pacing of the plot sometimes really feels off. A plot that arises in the last portion of the book, that I expected and thought would be the focus of a whole second book, is taken care of in relatively straightforward and fast fashion, too much, I feel, given the gravity of those events. Simultaneously, a major POV character disappears from the narrative for what I think is a disproportionate amount of time given the narrative weight of the character.

Overall, despite those faults,  the novel shows excellent promise for the world and plotting. I hope that the author will let his characters, and his story, breathe a bit more, in the subsequent book in the series.

Bonuses: +1 for excellently done action scenes, the part of the novel where the novel really sings

+1 for an interesting set of magic systems and background

Penalties: -1 the last portion of the book highlights a narrative pacing problem throughout the book and puts it into uncomfortable overdrive.

Nerd Coefficient: 7/10 Enjoyable but not without its flaws.