Microreview [Book] The Once and Future Witches by Alix E. Harrow

A story that uses lyrical prose and a propulsive plot to create the good kind of sorcery. 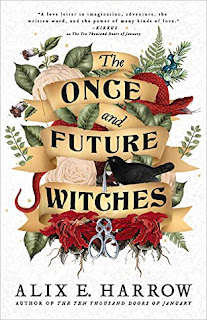 Decency to women should be a no-brainer. Malevolence to women for the sole fact that they’re women should be seen as categorical malarkey. But many in power have contorted something as simple as decency and trapped it away like Rapunzel in her tower. Empathy has become a rarity, a forgotten magic that when displayed should evoke a feeling of commonplace but instead seems like miraculous sorcery. The Once and Future Witches understands the necessity to claim that sorcery. Through lyrical writing, fairytales, and a motley crew of characters, it creates magic through prose while also championing the simple but essential magic of kindness.

In The Once and Future Witches, it is 1893 and witching is outlawed--their magic barred and buried by men. A woman has more than just magic inaccessible to them: they also lack the right to vote. Enter the Eastwood sisters: three magical, fractured siblings with completely different personalities who reunite upon mystical happenstance, and eventually join the suffragist movement. Things become complicated when they try to implement magic into the suffragist agenda, amidst anti-magic protestations. But a dissenting woman’s scorn for witchery pales in comparison to most men. Men who will go to dire and dirty lengths to maintain dominance.

This is a novel that uses the best, unique qualities of literature. Every instance is wrapped in prose that is lyrical without miring into perpetual, showy poetry. You ogle at its beauty, enraptured in its atmosphere, but it pushes you ahead to the next story beat rather than being mired in it until it becomes too much. There are quick asides into fairytales that augment the grander story. And as fluid as the dialogue is, it’s the interiority of the protagonists that elevate them into complex characters. The three Eastwood sisters (James, Agnes, and Beatrice) would fall into archetypes – whether it be a bookish type or a renegade - from a lessor author, but Alix E. Harrow sets up those characteristics and then expands upon it, until their core is something unique and complex and the archetypes are just part of their lining.

There are secondary characters who don’t have room to expand as much as they could, and sometimes feel like pieces to advance the plot rather than people. But for every time these people seem like a plot device, the novel takes a couple nice dives into exploring them through the themes of racism within the suffragist movement, stubbornness against societal change, and other cutting ideas. Despite some characterization inadequacies, I never felt like the themes lacked room to breathe. The Once and Future Witches does the rare feat of being a character-centric tale, while never losing focus of the plot. The themes of sexism, racism, found family, and familial disputes are paired with story beats and twists that propel the plot forward.

Inequality lurks in the darkness. It festers in the black mold that vile rhetoric wraps around our mind. It’s almost like it moves with our shadow, following us around whether we like it or not. The Once and Future Witches offers an important message about the rewards of tenacity in the face of adversity. And offers some hope that many humans are well-rounded and capable—apt enough to get us out of the hellhole that existed both in 1893 and today. Hopefully one day, we can relax in the shade in which no one fears the dark shadows, and just enjoy the breeze.

Bonuses: +1 For the best lyrical prose I’ve read all year.

Negatives:  -1 For some missed opportunities with secondary characters.