Nerds on Tour: Before She Sleeps by Bina Shah (2018 novel) 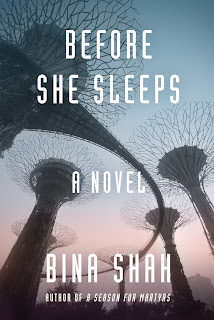 Dossier: Before She Sleeps by Bina Shah

Package Type: Book
Itinerary: Before She Sleeps is set in the futuristic Green City, in the newly reconstituted nation of South West Asia, a few decades after wars and a pandemic of mutated HPV have brought the old world order to its knees and caused the deaths of a disproportionate number of women. To rebuild itself, South West Asia has instituted strict citizenship rules which require women to be married to multiple men, and to have their fertility constantly monitored and artifically boosted in order to increase the population once more. It's a system which utterly disempowers women and has wide-ranging impacts on human relationships in general, and a small number of women have found a way out of the system, escaping to a haven called the Panah where they live underground and out of view of the authorities. However, to maintain the Panah, women are expected to engage in what is effectively sex work in all but the most literal sense: they are sent out to the homes of wealthy, allegedly trustworthy men, where they spend the night in intimate but non-sexual companionship - a form of relationship which is apparently missing from Green City under its current regime.

Sabine is one of the Panah's women, having grown up in a relatively stable, traditional family until the death of her mother under suspicious circumstances. Sabine is relatively content with her life on the margins with the Panah, although she is having trouble maintaining boundaries with one particular client; she's also an insomniac, and the other women around her express concern over her inability to sleep. Also prominent in the book are Lin, the niece of the Panah's founder and its current leader; Rupa, another member of the collective who, unlike the others, feels she was forced into this life and that she would have been content within the system if circumstances hadn't conspired against her; and Reuben, a senior Green City official and secret benefactor of the collective. When things start to go wrong for Sabine, she finds herself coming into the radius of Julian, a doctor whose commitment to medical ethics comes into conflict with the Panah's rules. The relationship between the two of them, and the attempts of the rest of the characters to untangle what has gone wrong with Sabine and whether she - and the Panah - can be saved, is what drives Before She Sleeps to its ultimate conclusion.


Travel Log: Before She Sleeps is an intriguing entry in the canon of patriarchal dystopia - a story set in a future west Asia that combines the phenomenon of "missing women" with a level of extreme government control over reproduction. Unlike the obvious comp title, The Handmaid's Tale (and if it seems dull to bring that up, I note that my copy of Before She Sleeps has a Margaret Atwood quote on the front cover and makes direct reference in the blurb, so the comparison is very much invited), Shah's book focuses on the lives of women who have in some way escaped from that system, drawing attention to the ways they (and female relatives) exerted agency before and after joining the Panah. It also allows Before She Sleeps to explore the crushing weight of patriarchy even for women outside its direct control: the Panah, far from being a utopian space for the women who find it, is effectively a brothel which gives its residents no choice in whether they want to engage in the work it gives them. That work exists at the mercy of elite men, and is particularly subject to the whims of Reuben, who becomes an increasingly antagonistic figure in the novel's landscape as it progresses. By portraying how constrained even an escape from the official systems of Green City is, the novel drives home the extent of patriarchy and the systems which prop it up, while still offering the reader protagonists with agency and decisions about how they live. Before She Sleeps also differs from The Handmaid's Tale in that the patriarchy it builds up is not a religious one: in this future, religiosity is frowned on as a relic of the past, but patriarchal attitudes towards women are upheld through a medical focus on their reproductive role and the insistence that good citizenship for women means doing one's reproductive duty to the nation, sacrificing all aspects of themselves for its continuation and a hypothetically better future. (Note: Like most books in this sub-genre, there's no space for trans folk in the world of Before She Sleeps, and the book itself doesn't have any exploration of how trans people try to exist in its world.)

As the book progresses, the focus shifts from a more mosaic novel approach with the relationships and circumstances in the Panah (including some flashback sequences), to a more narrow focus on Sabine and Julien - and it's ultimately their relationship and the circumstances in which they end the book that provides its tentative note of hope. While the second half was just as satisfying as the first in its way, and the growth of the relationship between Sabine and Julian, while fast, is nicely done. Julian is, perhaps, a little too perfect for the society he's grown up in: a doctor who prizes his own ethical integrity above his own security within the regime, and who immediately overcomes any ingrained biases against women (in fairness, as a younger man in a junior position he's apparently met very few of them aside from his mother) to form a bond of equals with Sabine and to continue to risk his job and his life for her well beyond the point where he might have an escape that would preserve his own position. Then again, Before She Sleeps isn't a long book, and it's clear that there are avenues that might have been explored had the book gone into more depth with some of its characters - a greater role for Rupa with more internal growth, or a more in-depth reckoning with the way men like Julien have taken in patriarchal attitudes and how that affects the way they react to the women of the Panah and their attempts to secure freedom. That said, Before She Sleeps does hang together effectively with the length and story that it does have, and I didn't feel that anything was missing that affected my enjoyment of its closing pages, even if they were quite focused on just two of the characters I'd originally become invested in.

Before She Sleeps is a worthwhile book, one that offers a vision of dystopian patriarchy that complements its forerunners (Maggie Shen King's An Excess Male is another interesting book, one that also takes place in Asia and deals with missing women and subsequent polyandry, which could easily be read in conversation with this) while offering its own speculative take. Before She Sleeps does contain mentions of rape (though no graphic depictions) and of other abuses towards women, and extensive discussion of pregnancy, including complications and miscarriage, so readers will want to be aware of that before taking it on.