Microreview [book]: How The Multiverse Got Its Revenge by K. Eason

Former Princess Rory Thorne finds that her actions, or inaction, may yet cause the multiverse to break once more 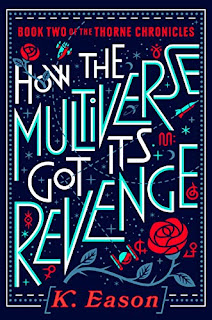 Retiring from being a Princess, one who was central to an interstellar conflict, isn’t as easy as it looks. Sure, Rory Thorne, blessed by fairies, has opted out of the politics and political games that got her in trouble for the first place. But when xenos, aliens show up seeking a weapon, politics drags Rory and her former companions and allies into the mess. And when that weapon turns out to be something unexpected, Rory is going to have to relearn something a Princess-turned-space-salvager has tried to avoid for years: Politics.

The narrative voice is a strong point of the novel and a real highlight that carries over from the first book. Voice and tone and grounding the reader into an immersive and distinctive voice is a way for a novel to center and be grounded, I think, especially given the gonzo weirdness of an unabashedly science fantasy universe. This is a novel, a world, a series that only puts the lightest of foundational touches to align the SFnal and Fantasy elements and it likes it that way. So tone and narrative voice carry the reader even as they wonder just how fairies, otherwise unexplained even as aliens, line up with spacecraft, space stations, and the magical art of arithmancy. Having recently watched the She-Ra reboot, I saw this sort of sensibility at work in a visual medium, and people who dig that science fantasy feel in She-Ra are going to like and accept that feel in the first novel, and here in the second novel as well.

It makes for a relatively breezy and easy read, too. The narrative voice likes to do asides, comment on the narrative and otherwise be self aware of what is happening in a historical context. The conceit impressed in the novel suggests this was written long after the events by parties unknown. Readers who liked the writing style of the first novel are definitely going to appreciate its triumphant return in this novel and it is for me far and away the best thing about the novel.

There is a central plot and social question in the novel that doesn’t get explored or delved as much as it should be, and there is no way to really discuss the hole without spoiling it in detail. The very center of the novel, the central question it appears, and for lack of a better word the inciting incident that launches Rory and her friends and allies into an interstellar conflict is a weapon discovered by Rory and her companions. This weapon, called Rose, turns out to be sentient, a potential planet killer but with thoughts of their own. I immediately thought of the Doctor Who Episode Day of the Doctor and I am pretty sure other readers will too.

Rose’s fate and who controls Rose become central to the novel, but the fate of Rose and how their fate is handled thereafter just doesn’t quite stick the landing. Given the importance, the game changing nature of Rose, Rose’s fate and the fate of those Rose interacts with just doesn’t come off quite right.  This is something that I felt for a lot of the book. Getting the band back together is hard after you dispersed it, and a lot of the novel feels like its treading water as a conflict happens in utter slowness, like molasses. The novel does wave in the direction, in its metatextual way (as noted above) of how war and conflict are depicted and how they are in reality, but too much of the novel feels like a slog. Rory herself just doesn’t come alive on the pages as she so boldly did in the first novel. There is a potential relationship/romance thing between two different characters in the novel, but that too, feels like it doesn’t come together, even in the denouement. It frustrated me.

In all, though, the disappointing feel I get from How the Multiverse Got its Revenge is that it is ultimately unnecessary. It doesn’t snap and crackle like How Rory Thorne Destroyed the Multiverse. There is an interesting question posed in the entity of Rose and Rose’s rights as seen above, hopes and wishes, but this ultimately feels a bit underbaked and undercooked for all of that and given its resolution, it was not worth the effort for me. There is a bunch of interesting worldbuilding going on, but it's a thinly spread worldbuilding that leaves more frustrating questions than answers. There is a fair amount of butter but it's spread all over the bread too thinly to taste it.

Finally, there is a lack of essentialness to the book. I don’t know if there will be more in the series. The flashes forward mentioned in some of the narrative at the end makes it uncertain if there is going to be another book or if one is even really is indicated, but the events here, especially and tragically the central interesting question the book offers regarding Rose, are all in the end supernumerary and unnecessary. Like some sort of medieval angel in a morality play, a fairy does explain to Rory that her actions here HAS precipitated a wider conflict, that her actions in the novel have doomed the multiverse to conflict, but I just couldn’t buy it. The other possible paths and consequences and the nature of the threat seem to be pointing instead toward an inevitability of the conflict. Ultimately, the fate of Rose doesn’t make a whit of difference in the overall narrative and life story of Rory Throne and having spent many pages to be potentially invested in Rose’s fate, and how Rory connects to that, that’s a damning statement.

In the end, the book simply did not satisfy me.

Bonuses: +1 Strong narrative and authorial voice as first seen in the first novel.

Penalties: -1 worldbuilding so thinly spread that it raises more questions than it answers; -1 plotting and setup that are ultimately underthought and underdeveloped; -1 for the book, ultimately, not feeling   integral to Thorne’s story.