Combining magic, romance, intercultural politics and the struggle against patriarchy, The Midnight Bargain is a delight from start to finish 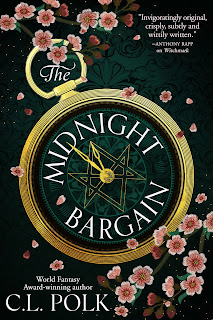 Beatrice Clayborn is a woman with plans. As a woman from a high-class family in the highly patriarchal society of Chasland, she is expected to spend her first "Bargaining Season" attending dances, handing out her card to eligible suitors, entertaining callers and finally settling down with a man who is comfortable trading her talent for sorcery for the financial resources to get her family out of crippling debt. It's a deal that will secure her family's future and ensure that her sister can benefit from the finishing school education she couldn't afford, but there's one problem: for Beatrice to marry, as a woman with magical abilities, means that she will have to give up her magical powers, putting on a warding collar throughout what her husband deems to be her childbearing years in order to prevent her from being attacked by spirits during a pregnancy. Beatrice has far more attachment to her magic than to a future as someone's wife, and if she can only find the text she needs for a specific ritual, she can call a greater spirit into herself and become both powerful and unmarriagable: a combination that will offer her freedom to help her family in her own way.

What Beatrice hasn't reckoned on is the arrival of the Lavan siblings, both attending this Bargaining Season from the more powerful neighbouring country of Llanadras. Ysbeta Lavan quickly establishes herself as a rival to Beatrice's scholarly knowledge, before establishing that she has the same goal: escaping a politically convenient marriage to one of Chasland's most eligible elites. Her brother, Ianthe, establishes himself as an obstacle of a rather different kind, because he's smoking hot and totally amazing and it's not long before the two are rather hopelessly in love. Ianthe offers the chance at marriage in relatively more egalitarian Llanadras, where Beatrice could still practice minor magic but not call a greater spirit and train as a sorceress, and the Lavan's wealth means it would support her family as well. Of course, if that were actually a solution to Beatrice's real problems, we wouldn't be reading a book about it, and thus begins a romance that's as much about the growth of the individuals involved as it is about their growing together.

The Midnight Bargain benefits from an absolutely delightful setting, with a plot that breezes by in a whirl of regency intrigue. Over the course of her season, Beatrice encounters dances, card parties, picnics, chance meetings at bookshops, symbolic greenhouse conversations with prospective parents-in-law, heated debates in carriages and over breakfast, and even a fabulous boat party, with each set piece given exactly the time it needs to unfold and advance the plot while leaving plenty of time to enjoy each one. Of course, the patriarchal nature of Chaslander society is always on display, and every charming, witty conversation or clever use of feminine wiles comes with an edge: this is a society which burns alive women who give birth without shutting themselves off from magic, after all. Beatrice never loses sight of the game she's playing, in which she's expected to balance the number of men she encourages to chase her until she can strike the best possible deal and get smoothly handed off from father to husband. It's a tricky balance even before factoring in the danger of her attempts to escape the system entirely, or the occasional murder attempt by a jilted suitor, or the fulfilment of bargains made to Nadi, the luck spirit Beatrice invokes to help her in her quest. Beatrice's multiple competing dilemmas and the constant novelty of the scene changes kept me thoroughly hooked on The Midnight Bargain, without ever being overwhelmed or weighed down with the amount of drama it threw at me.

It helps, of course, that Beatrice is a very easy protagonist to love. This being, at heart, an m/f romance, the relationship between Beatrice and Ianthe just about edges out everyone else in terms of screentime, and that's no bad thing: Ianthe is perhaps a little too willing to let go of his ingrained cultural biases about the role of women, but I can't dispute that not being an ass about Beatrice's ambition makes him far more enjoyable to spend time with. Much of the worldbuilding of The Midnight Bargain is built on its portrayal of the different cultures of Chasland and Llanandras, with the cultural power very much held by the latter.  Unlike Chasland, where women are expected to have as many children as possible and sorceresses therefore need to wear warding collars from marriage to menopause, Llanandras allows women to plan their families and only ward themselves while pregnant or trying for children. The assumption of cultural superiority underpins the Lavan siblings' interactions with Beatrice, particularly when her feelings for Ianthe begin to conflict with her desire to pursue magic. For Ianthe, learning to respect Beatrice means interrogating his biases about the role of women in his own culture, and to take her ambition and talent seriously, and he rises to the challenge brilliantly, bringing several more juicy plot twists along the way.

Ianthe isn't the only important relationship in Beatrice's life: her growing friendship and trust with Ysbeta is just as important, as the two learn to work towards their mutual goal. Ysbeta's relationship with Beatrice is also shaped by her assumptions about the superiority of her own culture, and also by her judgement of Beatrice's sexuality: it's not outright stated in the text, but it's pretty explicit that Ysbeta is aromantic, and she finds it impossible to believe that Beatrice wouldn't be better off abandoning her magical dreams even as she pursues the same goal. Ysbeta is a wonderful character and her chemistry with Beatrice is just as good as Ianthe's (until the reveal of her sexuality, I was open to this becoming a poly romance, but it was not to be). The only point at which her characterisation falls down is a spoilery late book scene, which hinges on withholding key information and a point of distrust between Ysbeta and her brother at a point when it felt like their character arcs should have moved past that point. It's a key moment to setup the book's climax, but it was the only point where I felt that The Midnight Bargain's character arcs were at odds with what its intricate plot was demanding of them at that moment.

I could go on for days about the other wonderful characters and moments in this book: aside from the main trio, there's also Beatrice's novel-reading, political-game-playing sister Harriet, her quietly supportive mother, the cast of other ingenues and men in the bargaining season who are pursuing various agendas of their own, and of course her difficult, patriarchal father, who fails to take seriously any of Beatrice's attempts to bring him into her plans for her own future. There's also Beatrice's relationship with Nadi, the luck spirit she initially conjures to help her through a dangerously high-stakes card party, and then continues to work with throughout the book, through whom the majority of the book's magical component is conducted. Nadi and Beatrice's relationship both deepens and challenges our understanding of the spirit bonds which form the heart of The Midnight Bargain's magic system, offering a counterpoint to the universally held assumption that sorcerers must control and dominate the spirits they work with for the bond to be effective. It is also, like everything else in this treasure of a book, an absolute delight.

And that's my main takeaway from The Midnight Bargain: this is just a delightful book, from start to finish, in a way that balances intrigue, incisiveness, drama and flights of fancy to create a reading experience that was pure enjoyment for me. If you're looking for any of the above, in a magical period romance setting, you really can't go wrong with this book.

Bonuses:  +1 Everything about this book just made my heart very happy. If that's not worth a point, nothing is.

Penalties: Nothing, it is too fun to take things away