The continuing adventures of Captain Eva Innocente, using a dark part of Eva’s history as a hook for further shenanigans among the crew of La Sirena Negra. 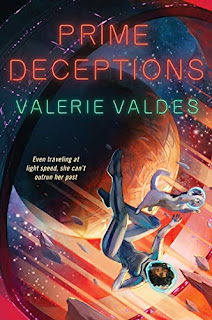 When last we left Captain Innocente and her crew, Eva had gained a co-Captain to her enterprise (Pink), a relationship with another crew member, and a continuing problem with the crime syndicate of The Fridge. More than that, though, a crew’s got to eat and a ship always needs fuel. But what Eva doesn’t expect in taking a mission to find a missing scientist is a trip back to a dark and painful place in her past, the planet of Garilia. The sins of Eva might yet break the small found family she has built on the La Sirena Negra. And, in addition, the scientist  might yet give the science organization The Forge (including Eva’s sister)  the chance to build and activate something truly dangerous.

All of this is the matter of Prime Deceptions, the sequel to Chilling Effect, by Valerie Valdes.

For all of its interstellar Gates, the worldbuilding on the planet Garilia, and the various plot lines, where the novel shines is in the personal story of Eva, and her connections with the crew. The novel poses a thorny question--if you have done what is unquestionably a very bad thing (and no mistake, the revelation of Eva’s past on Garilia shows what she and her father got up to is definitely a horrible set of actions, no matter what mitigating factors exist), can you go forward from that? How do you tell people, today, about something looming so large in your past that it threatens to overwhelm the present? How will you handle their reactions? How can you live with yourself for withholding that past? The central story of Prime Deceptions (and the titular reference) is to Eva’s activities on Garilia years ago. The author handles the internal pain of Eva rather well, and it’s an interestingly crafted balancing act.

The introduction of the darker material and the ghosts of Eva’s past is an interesting evolutionary development for the character, the book and the series. It does force the reader, as well as the crew of the ship, to reassess Eva, her past and her story in the light of new information, and it was for me, a humanizing and deepening moment for Eva. It also explains a nagging part of Eva’s backstory, and that is why she wound up in her sometimes hardscrabble existence in the first place. It puts some of the things that Eva has said and done in Chilling Effect in a whole new light and I wonder if this part of Eva’s story hasn’t been in the author’s pocket all along.

I do want to assure readers, though that for the dark plotline of the past of Eva, the novel is more akin to Chilling Effect in the main.  Like Chilling Effect, the tone of Prime Deceptions is generally humorous and light (althjough there are some dark things in Chilling Effect, too, Prime Deceptions takes it deeper). Pop culture references, lots of Cuban swearing, and always the sense of fun adventure are the main tone of the book. The author doesn’t brush Eva’s history under the rug, but in the main the novel keeps on with the style of the previous novel. There are character developments (as Eva and Vakar humorously try to work a relationship), Pink’s status as co-captain, Min (whose story ties up with the main plot) and then of course the psychic space cats. Despite them being on the cover, the psychic space cats of the first book really were there in a cameo capacity, and in a way gave the novel an outside looking even fluffier feel and look than the book actually had. In Prime Deceptions, the psychic space cats (one in particular,Mala ) have a larger, and also plot-relevant role.The story is meta enough that Eva, when she meets the Forge for the first time, complains openly that it does sound a lot like The Fridge. Fighting robots, space battles, epic shopping trips, and Eva colliding with her Mother (a formidable a personage as Eva’s father, and we see a lot of where Eva gets some of her personality from) are all here, and keep the pages turning.

I also enjoyed the expansion of the worldbuilding and the world provided. Eva’s universe feels like a cross between Mass Effect, with a hint of Borderlands, run through Valdes’ creativity and point of view. One delightful and frustrating consequence of reading Valdes’ novels is a craving for Cuban cuisine. Younger me, long ago, reading novels with food pills and barely discussing food in a SF novel would have been amazed at Eva lamenting that she could not get any of her mother’s meatballs. Food is culture, personality and worldbuilding, and Valdes knows and leverages that. And there are amazing places depicted, even beyond the thorny and complicated Garilia, which dominates the narrative and could be reviewed on its own for its exploration of themes of colonialism, dominance, revolution and cultural appropriation. There's Evercon, ,the equivalent of a Comicon (but running 24/7/365)  on Pluto’s moon Charon. Abelgard, a garden world with an underground society of robot fighting. The Ancient Alien Proarkhe technology gets explored and deepened throughout the novel, too. It’s a rich and interesting ‘verse and we get to see a sheaf of interesting places, with a found family set of characters to bring us to them.

Finally, there are the plotlines. Valdes, like in Chilling Effect, is very good at layered and intersecting A and B plots, providing reason and through lines to give the reader, and also her characters, reasons to bounce around the local group of stars on their Fed-ex like chases. Be it the mystery of Min’s brother, whatever the heck is going on with the mysterious Pokemon like Pod Pals, the Forge-Fridge Cold War and what both sides are up to on their own, and the consequences of Eva’s previous time on Garilia all braid and weave together. It keeps that light tone from the first novel in terms of its plotting, which can be a feature for some. I do think readers who want a decent amount of crunch to their space opera plotting might be put off, just like in Chilling Effect. Overall, I think Prime Deceptions is an entirely more successful novel than the first and I look forward to more books from Valdes, hopefully with this set of characters and verse.

Bonuses: +1 Interesting depth and development to the main character and her history, which meshes interestingly with lighter tones of the book; +1 for interesting and diversely described and explored worldbuilding. Valdes’ verse would be a fascinating place to visit.

Penalties: -1 Breezy plotting is a delight to read--but it might put off some Space Opera readers looking for more heft.