A dense, rich adventure which puts its characters on very different, satisfying journeys 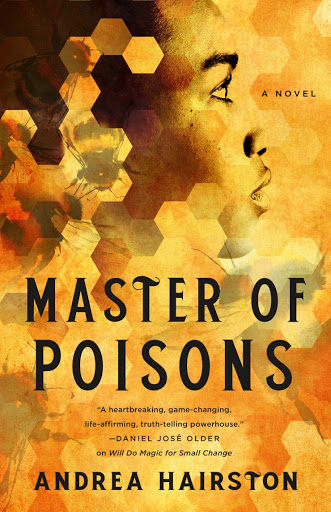 Master of Poisons took me approximately forever to read. Very little of that is the book's fault: while Andrea Hairston's writing style does require more attention than some, packing a great deal of worldbuilding and information into deceptively simple but poetic prose, its certainly no more than I would expect to give to an author of this calibre. It's not like Master of Poisons doesn't open with some super intriguing stuff: right off the bat, we've got poison deserts, scheming advisors, a deceptively confident first protagonist and a plucky young second one all conspiring to draw me in. It's even got an opening paragraph ("We are more likely to deny truth than admit grave error and change our minds...") that feels like an shoe-in for the pantheon of great literary opening statements about human nature. Unfortunately, 2020 being 2020, with all its effects on my confidence, reading ability and attention span, the experience of reading Master of Poisons turned in my mind from "will be awesome, just need to focus" to "insurmountable reading challenge". This is a book that I wanted to give my full attention to, and that meant leaving it on my bedside table for far longer than I wanted to. But! We would not be here if I had not Successfully Read the Book, and I'm here to tell you that this is a book that you, too, can and should read!

Master of Poisons centres around two characters on very different journeys, within a multiethnic African-inspired land dominated by the Arkhysian Empire. Djola is the Master of Poisons in that empire, a northerner who has risen to a senior position and won the trust of the empire within a set of scheming advisors. When we're introduced to him, he feels utterly comfortable in his position: middle-aged, married with children, happy with the political game he's playing and willing to take a risk or two to see his plans through. However, with the empire's attention taken by a poison desert which threatens to overtake the land on which the empire is built, Djola's plan to harness forbidden magic backfires on him, and he finds himself exiled, pushed to the margins of his home and separated from his wife and children until he returns with a solution. Djola's exile takes him out to sea, where he spends a considerable amount of time with slave-taking pirate captain Pezarrat and his awful crew, trying to figure out his own direction and what his empire needs from him. It's a journey that tears him down before we see any progress in his goals, and watching him grapple with his failures and try to uncover and harness magic that the empire he serves has driven to the margins is hard to watch, even as his initial overconfidence makes it a fitting arc.

The other main character is also embedded in magics outlawed by the empire. Awa is a "green sprite", 12 years old at the start of the book, who is being brought up among a group of Lahesh conjurers. Having been sold by her father after being exposed to the Smokelands, a supernatural realm which her mother has taught her to access, Awa has a traumatic entry into her new world, but her anger at her father and brothers for their actions is tempered by her flourishing in the Green Elders camp, where she learns to navigate the smokelands and begins training as a griot. Unfortunately, Awa's early sections were home to the language choice I just couldn't get on board with in Master of Poisons: the italicisation of the neopronoun "vie" for those who identify as veson, neither man nor woman. The empire doesn't recognise veson (are you starting to see a pattern here), meaning they are largely associated with marginalised supernatural groups; along with other italicisation choices, the italicisation of "vie" seems to be to show how the veson are an "othered" cultural element to the empire. However, when applied specifically to a neopronoun (which doesn't change with case, so he/him/his translates to vie/vie/vie) it's an uncomfortable choice, to say the least. That said, without familiarity with the cultures Master of Poisons is drawing on, I may be missing crucial context here, and apart from the italicisation I appreciated the book's portrayal of a range of queer and nonbinary characters.

The world of Master of Poisons is richly drawn, its different cultures intriguing and distinct even as the book portrays their erosion by a homogenising empire. After the initial set-up, both Djola and Awa take their time in their respective situations: Awa spends that time growing into her power and learning about what she can achieve in the Smokelands and in the waking world, while Djola, as mentioned, is sad and frustrated on a pirate ship. This initial period spans years, and its not until the midpoint when things suddenly take a sharp left turn, with Djola reclaiming agency over his mission and Awa being subjected to significant external forces that change her destiny and separate her from her found family, forcing her to draw on hidden resources (and make new friends) to survive as a captive in the empire's grasp. Things in the second half move significantly faster than the first, but the themes remain consistent: this is a book with lots to say about trust and survival in hostile circumstances. If there's a criticism to be had in this second half, its that some of these relationships don't land as effectively without the space to breathe of the slower first half.

While it's a great read throughout, Master of Poisons really sparkles from the point at which Djola and Awa's stories intersect. The two bring an initial scepticism to each other's missions that soon evolves into respect and then into genuine care, a chemistry that draws the reader in against the backdrop of an evocative supernatural journey. Their relationship re-energises the book's focus: which is, after all, about saving an empire from what is technically a poison desert but is actually about its own complacency and greed. That ending, when it comes, is fast paced but ultimately satisfying, a culmination of a serious journey of a book that left me very happy with the whole experience, despite how long it ultimately took me.

Bonuses: +1 Characters with satisfying journeys that get even better on joining forces

Penalties: -1 The sheer amount of characters and worldbuilding can get overwhelming, particularly in the fast-paced second half