In Hench: A Novel, Natalie Zina Walschots brings a ground level view of a world with superheroes and supervillains, with analysis, data and cost benefit analysis being as powerful a superpower as x-ray vision. 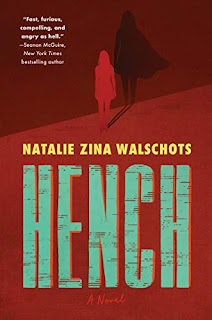 Anna Tromedlov (spell her last name backwards) has a problem. She’s a paper pusher in a variety of temp and short contract jobs for, primarily, supervillains. When she stumbles into a more permanent position with *the* premier supervillain, Leviathan, it seems that she might have it made. But then being in the wrong spot at the wrong time leads her to being physically and a bit psychologically  broken by a superhero. Anna gets mad, and more so, a determination for her to use her skills at analysis and data to break HIM and all of his kind in a far less kindly way. Revenge is a dish best served with spreadsheets and Pareto curves.  Exit Anna, enter The Auditor.

This is the story of Natalie Zina Walschots novel, Hench: A Novel.

Life is full of coincidences and ideas percolating at about the same time, and you will be forgiven, as I was, to talk about the 900 pound supervillain in the room, and what Hench parallels to: The Amazon series The Boys. Given the time and effort and the vagaries of publishing, Hench is not riffing off of or stealing from the series, but the harmonization of the story and the world between Hench and The Boys is unmistakable. A world which is just about ours, except Superheroes and Villains are common and accepted as a thing. Check. Superheroes being callous and uncaring about what sort of damage they do to others. Check. Superheroes having falling outs and all sorts of drama, to be exploited. Check. The Boys focuses on superheroes behaving badly and how grey characters deal with that, but Hench brings us the Villain side of the equation--how does someone who has wandered into the dark side of things, and then shoved there by superhero action, decide to take revenge, in a methodical and calculated way?

This is the heart of the book and where the book sings the best. We get to see Anna’s evolution, how she is radicalized from a temp hied by villains to a position of leadership, and how she uses her superpower, as it were, to apply data and analysis to the problem of how to take down superheroes. There is a lot here, that the author explores and unpacks--how does her relationships with others, outside of the Leviathans’ organization, evolves and changes as she rises from being Anna to becoming The Auditor. There is a lot of true-to-life office politics and maneuvering and a real sense that an organization, even one under a supervillain, is going to conform to norms and practices, archetypes and personalities, dramas and divisions, recognizable to anyone who has worked in a corporate office. Given my own role as being in a Quality department, I appreciated and enjoyed Anna’s role and arc within the supervillain corporate sphere.

The novel is strong on representation and depiction of queer and transgender characters. It feels like a fully inclusive and diverse version of our own world.  I am ambivalent though, about other aspects regarding the worldbuilding of the book, which has both positive and negative qualities. On the plus side, we do get a good look at how superheroes and supervillains do their thing, with enough but not an excess of technobabble to make the reader break the suspension of disbelief as to how superpowers actually work. The novel does go into detail at points, sometimes very strong detail, and in others takes a more vaseline-on-the-lens look at how it all works. The author, and the book, know when to focus on character drama, for the most part, and when not to do so and to look at the fun of super powered individuals. On the other hand, the novel is a bit watery and waverly on exploring the ramifications of a world with superheroes --how long HAS the world had them? What is the background on that, and have they had a net influence on the planet? I am not certain the author has considered these issues, not even by the iceberg approach does it seem to be a there, there.

My major critique of the book is that it really feels like a first novel in some of the worst ways. There is a thread that runs through the book that hints and sets up Anna to actually BE a superpowered villain. Not just in some of the augmentations she gets (after being broken by a superhero) but there are a couple of points where Leviathan more or less states outright that he has more than a suspicion that Anna has powers of her own, latently, but this thread ultimately gets no payoff and goes nowhere. While the end of the book suggests that this COULD be a potential series, and there is much more for Anna to grow, having a touch back to this, even if it is going to be paid off in the second book, would have made that plotline and thread feel far more satisfactory and resolved. There is some roughness in other parts of the writing, too, but nothing out of the unexpected for a first time author.

Despite some of its roughness, I enjoyed Hench, and look forward to seeing what the author will do next. I get the sense that this is a story that the author has been extraordinarily eager to tell. There is a palpable and real anger and passion to this book, and to Anna's story that comes through on nearly every page.  With this under her belt, where she will go next is of interest.

Bonuses: +1 Good follow through of central character and a look at someone who descends into villainy by a non traditional route, despite its comparisons to a major media property.

Penalties: -1 A major throughline of the book is not tied off or developed sufficiently

Nerd Coefficient: 7/10  an enjoyable experience, but not without its flaws