A tapestry of worldbuilding inspired by a variety of pre-Contact cultures and societies in the Americas, with an interesting and striking trio of main characters 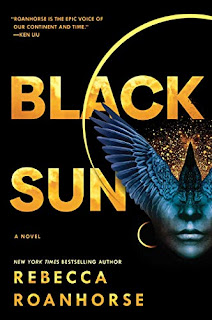 CW: Violence against children, suicide
It’s nearly the winter solstice on the continent of Meridian. In the city of Tova, it is even more an auspicious occasion for a society which watches the stars: for the first time in a long time, there will be a solar eclipse on the Winter Solstice. The Convergence is a time of possible change, when the doors of the world might open, and when long simmering tensions might explode.

Young Serapio might be is destined to play a role in this eclipse, making it a Convergence like none other, if he could get there, across a great distance of ocean, in a very short period of time. And it's most certainly a Convergence like none other for Naranpa. Unlike every other member of the Priesthood, she is from the mean streets of Tova, having risen to Sun Priest rank right as this auspicious event is about to occur.  And then there is Xiala, of the mysterious Teek, challenged by society, an outsider, an exiled member of a mysterious mariner people. But she's also bound by the prospect of a handsome profit if she can get Serapio to his date with destiny in record time: a task perhaps even beyond a Teek captain.

Their three stories are the center of Rebecca Roanhorse’s turn into epic fantasy, Black Sun.

Black Sun’s Meridian is a continent, a world, a set of peoples and cultures inspired by a variety of pre-Contact cultures and societies in the Americas. The Tovans at the heart of the action, with their canyon cities, are inspired by the Ancestral Pueblans of the American Southwest. The Teek seem to reflect the pre-Contact cultures of the Caribbean. Cuecola, origin of Serapio, has definite notes of Mesoamerican pre-Contact cultures. The richness of these cultures are on full display and there is a deep and abiding worldbuilding that happens over the course of the book. As Tova is the location of one of the main characters, and the destination of the other two, it gets the major focus of the worldbuilding and a view as to how its society works, from the heights of the Priesthood to the mean streets that Naranpa came from. Foods, clothing, methods of address, architecture, style, and the small touches are all brought to life and really immerse the reader into this unfamiliar landscape. This is part and parcel of what a lot of Epic Fantasy is geared for, and the author delivers. The novel and the author avoid an othering or exoticization of these elements (given Roanhorse’s background, extremely important nuance is on display) and it feels natural and strongly rendered.  And there is plenty of invention, including giant, ridden crows that remind me of the Justice Eagles from the work of Kate Elliott. And there are plenty of other surprises, too. Seeing some Ancestral Pueblan architecture on my recent trip just as I was reading this book really helped make the book resonate for me.

In this tapestry of worldbuilding, we get an interesting and striking trio of main characters, and secondary characters that reflect and make a rich character map of connections. For Serapio, this is mainly done in a serious of flashback scenes, showing how he came to be as he was as we see him on his journey to Tova. This is nicely aligned with how he interacts with the crew of Xiala’s ship, and how events on the ship eventually come to a climactic conclusion.  Xiala’s background and personality are mainly fleshed out on the ship, contrasting and comparing her to the rest of the crew, and exploring the differences how outsiders are seen, how they see themselves, and how prejudices can lead to tragic results fill her narrative.  Her brashness and boldness infuse her story, too. With Naranpa, we also get an outside narrative, but someone who has been in the higher echelons of society for so long that she has mostly put aside her past as being from the lower parts of society. We get to see how those higher echelons work, and how they rule, reign, scheme and plot, and more importantly, how do they really feel about an outsider like Naranpa. Behind these three characters, we also get Okoa, who is of the clan of Carrion Crow, also drawn back toward Tova as events unfold. In some ways he reminds me of Evan Winter’s Tau from Rage of Dragons. Young, pushed by events, and also by duty and a sense of self. He gets a little less play than the other main characters, but Roanhorse’s characterization comes through.

The author does a great job at immersing a reader into the society, customs and mores of this world. There is a lot of invention here, and the basis for that invention is a set of cultures that many readers are not going to be familiar with. In epic fantasy, there is a shorthand involved in using cultures based on medieval Europe, because they are so familiar to the genre. A fantasy novel can use Kings and Queens, Dukes and Barons, use a Greco-Roman Pantheon, sketch in a scene from a Flanders-like market town, and the reader, having absorbed it as part of their general milieu or from countless fantasy novels and stories can absorb it on the go. The society of Black Sun is very different, and so the author has a lot more work to do for a reader without prior knowledge of the cultures it is based on, with little of that foundation to rely on. It is a testament to Roanhorse’s writing that she succeeds in this, in spades. Yes, it is a pretty deep fall into the plunge pool of the world, and I would not think this is a 101 epic fantasy novel in the slightest in that regard. Having the experience of the cues and the patterns to pick up and run with the worldbuilding is a key to success and full enjoyment of reading Black Sun.

The major issue with the novel - and what might well cause a reader to pass on the book - is there in the first chapter. This chapter should come with a heavy content warning, because of permanent horrific violence done to a child and another character’s suicide. The novel usually isn’t that dark afterwards but it lays down a marker that this is often a harsh and unforgiving world. It frankly surprised me and it was a barrier, an obstacle for me. It didn’t nope me out of the novel but it is clearly not for every reader, and may be dangerous to those sensitive to the subject matter.

The other thing that the reader should know is that the novel ends on a cliffhanger, something that irks me as a reader in a first novel in a series. I do prefer having an off-ramp and while I am very invested enough to go to the next book, it is a weakness for a reader looking to read broadly but not deeply.

However, as a fantasy set beyond "The great wall of Europe", on a continent and culture based on pre-Contact societies in the New World? Black Sun delivers in spades and I am ready for the next volume in the series.

Bonuses: +1 for a strong and interesting set of main characters

+1 for fantasy that is wholly and completely beyond the Great Wall of Europe, expanding the boundaries of fantasy fiction.

Penalties: -1 The very dark matter in the first chapter may put off readers.