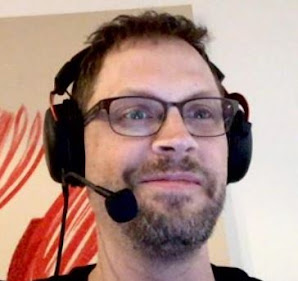 Thanks to magazines like Clarkesworld and Samovar, not only am I gaining access to more translated science fiction, but I'm also getting to see who the translators are. An author might write the most amazing short story the planet has ever seen. . . but if they didn't write it in English, I'm never going to see it unless a translator comes to the rescue.

While on a Clarkesworld kick, I noticed that Andy Dudak's name cropped up over and over in that magazine, as a translator of Chinese stories.  When Dudak agreed to an interview about his work and experiences, I was over the moon!  His Mandarin to English translations have appeared in Clarkesworld, Asimov's, Apex, Pathlight Magazine, and elsewhere. Dudak lived in China for 10 years, and the authors he has translated include Liu Cixin, Chen Qiufan, Tang Fei, Jiang Bo, Bao Shu, A Que, among others.

An accomplished author himself, Dudak's original fiction has appeared in Interzone, Analog, Science Fiction World, and multiple anthologies. His story ‘Love in the Time of Immuno-Sharing' was a finalist for the Eugie Foster Award.    You can learn more about Dudak's work and his translations at his website, Andydudak.home.blog, and by following him on twitter, where he is @Andy_Dudak.

Dudak let me pick his brain on everything from how he got his start, to how he managed to get his own fiction translated into Mandarin and published in China's Science Fiction World, what's happening right now in Chinese science fiction, and so much more.  And I was good, I promise, I didn't send him the fifty (at least!) other questions I wanted to ask.  Let's get to the interview!

NOAF: How did you get started with translating science fiction and fantasy? What languages do you translate?

Andy Dudak: I translate Mandarin to English. I’d been translating contracts and other business-related documents for a few years, and I’d been writing my own fiction for many years, when Tod McCoy suggested I try translating fiction. This was at MidAmericon in 2016. That night I approached Neil Clarke at a bar con and asked him to give me a try. Neil had published a few of my originals by then. I think that helped him take a chance on me. A couple weeks later I was translating ‘Western Heaven’ by Chen Hongyu. Somehow, I never thought of this on my own. It’s all down to Tod really.

NOAF: How do you find works to translate into English? Does the author contact you, or do you contact the author?

AD: I get a lot of commissions directly from Neil Clarke, who has a deal with StoryCom, a company in China that provides him stories for Clarkesworld. Neil and Ken Liu negotiated this deal with StoryCom years ago. So, about 2 to 5 times a year I get an email from Neil with a story attached, or several stories to choose from. At other times I’ve approached writers directly, either on WeChat or at a con, and asked them to let me translate a story on spec, betting that I could sell the translations. I’ve done this 5 times now. I’ve sold ‘The Heaven-Moving Way’ by Chi Hui to Apex, ‘Casualties of the Quake’ by Wang Yuan to Analog, and ‘Forger Mr. Z’ by Chen Qiufan to Asimov’s. Tang Fei’s award-winning story ‘Spore’ is still on submission, and a story by Gu Shi is currently at the rough draft stage.

NOAF: What do you do, when you run into a word or phrase in another language that just doesn't translate to English? What about rhymes or word puns, how do you deal with those?

AD: I often have to choose between literal or figurative translations of Chinese idioms (usually of the four-character Chengyu variety). Most of the time I go for a figurative translation, since as Ken Liu has pointed out, translating fiction is about recreating a reader experience, not just ferrying literal meaning from one language to another. For example, 九牛一毛 literally means “nine cows and one cow hair.” A good figurative translation would be “just a drop in the bucket.” There have been a few times I translated idioms literally, to preserve some Chinese flavor if I felt that fit the story, counting on context or an endnote to clarify the meaning. If I come up against something—an idiom or word or cultural reference—that stumps me, I go to my Chinese friends and colleagues for help. Luckily, after a decade living in China, I have a wide support network.

NOAF: You recently tweeted that you were working on translating a story that consisted entirely of dialog. Is translating dialog a different art than translating a paragraph of exposition, or are they about the same?

AD: This is the Gu Shi story mentioned above. Dialog is a bit different because you’re considering the voice of a character in addition to the voice of the author. But I also find it a bit easier because you’ve got an additional layer of context (you know who’s talking) to help you when it comes to ambiguous language.

AD: I don’t know that Liu Cixin directly influenced style or subject matter, but his Hugo win shined a spotlight on Chinese sci-fi, which is extremely diverse. There’s no pithy way to characterize it. It’s as if the eras and genres of Anglophone sci-fi (Golden Age, New Wave, Cyberpunk, Cli-fi, etc.) are all happening at once in China. You have surreal Han Song, a kind of Chinese Kafka, contemporaneous with Chen Qiufan, whom you could compare to Paolo Bacigalupi. Both of those are crude comparisons though. What’s happening in Chinese sci-fi is a diverse flowering of styles, hybrids, and the utterly new. China is an entire civilization, and it has changed radically over the last 40 years. The science fiction reflects this. It is audacious (Tang Fei), socially trenchant (Hao Jingfang), grimly prophetic (Yan Leisheng), heartbreaking (Wang Yuan), psychedelically mind-boggling (Zhang Ran, ShakeSpace), dreamlike (A Que), and visionary (Jiang Bo).

NOAF: You've had your own work published in Science Fiction World, China's premier SFF magazine. Did you do your own translating? How is the publishing experience in China different than the publishing experience at an English Language magazine (such as Clarkesworld, Analog, Apex Magazine, Interzone, and other magazines where you've been published)?

AD: I only translate in one direction, Mandarin to English. It’s easier if the target language is your native tongue. I could go the other way, but I would take forever and require a lot of help. It was Ladon Gao (@GaoLadon on Twitter, follow and hire him!) who translated my originals ‘Taste the Whip’ and ‘Cryptic Female Choice’ into Mandarin. ‘Taste the Whip’ ended up in Science Fiction World, the biggest sci-fi mag on the planet by readership. Ladon was my student at Beijing Language and Culture University, School of Translation and Interpreting. As to how publishing in China is different… much shorter response times! Incidentally, ‘Cryptic Female Choice’ also ended up in a prestigious magazine, with Tang Fei’s help. The magazine is Works (作品), and my story was in the same issue as Nobel-winner Mo Yan. Ladon is a machine, and a talented writer himself.

NOAF: Thanks so much for this amazing interview Andy!