Foundryside's blend of adventure, intrigue and interrogation of the human cost of industrialisation gave me everything I wanted from it. 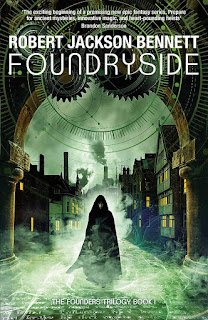 Rarely does a book instil such a sense of excitement in me as the first ten percent of Foundryside, the first in a new trilogy by Robert Jackson Bennett. The book wastes no time throwing us right into the action with Sancia, a mysterious thief in the middle of a job that appears to be going terribly wrong. Sure enough, within pages, Sancia has accidentally burned down the docks of Tevanne and has most of the city's authorities out looking for her. More importantly, however, she has discovered that the mysterious object she has been asked to locate is a magical key that can open any lock, and which she is able to have direct conversations with thanks to her own mysterious and unique abilities. By the time Sancia and her buddy Clef (who is a boy key, a fact which is actually questioned and has an in-universe justification beyond "of course this inanimate object is of the default gender!") are making their way through magical doors that <SPEAK IN OSTENTATIOUS CAPITALS ABOUT THEIR LIFE MISSIONS>, I was absolutely hooked, and while Foundryside certainly gets darker from this point, I never lost sight of that initial hit of wonder from the world Bennett has developed.

If magical talking keys sound a bit too whimsical for your tastes, I encourage you to stick with Foundryside anyway, because this is not a world that runs on fairytale logic. Instead, we are shown a magic system whose rules work basically like a programming language, in which objects can be "convinced" to bend or alter the rules of reality -- gravity being the most common example, though there are plenty of others. The developers of this system are basically inventors and coders, sponsored by the city's handful of powerful merchant families to conduct R&D and help them maintain technological advantages, and this reliance on centrally-controlled innovation has led to the concentration of wealth and power within these families, who run "campos" where those who work for them live and work in relative comfort while the rest of the city is left to fend for itself. The technology levels in Foundryside encourage historical comparison, bringing to my mind both the period of industrialisation in Europe and a more Renaissance element of "rediscovering" technology from a far removed foreign age. In terms of political dynamics, however, there's just as much here that is relevant to the modern day, where public welfare is increasingly at the mercy of extraordinarily wealthy innovators. The city of Tevanne, where the action happens, doesn't appear to have any concept of charitable giving whatsoever, and the Commons are shown as dangerous and lawless slums which families ignore unless absolutely necessary, while those inside the campos are still dependent on the success and whims of their employers for all their needs. It's a system  utterly rife with exploitation, inefficiency and a complete lack of interest in human wellbeing, and it's this background obviously has a huge impact on how the main story of Foundryside plays out.

Like the Divine Cities, Bennett's previous trilogy (which was nominated for and should totally have won a Best Series Hugo this year), Foundryside grapples primarily with the human costs of industrialisation and (to a lesser degree than its predrpredec) colonialism through the lens of a magic-driven secondary world. The difference here is that in the Divine Cities, this often comes across as an intellectual exercise: the main cast of that trilogy are all elite outsiders to the culture they are interacting with, and their main concerns are far more about top-down conflict reconstruction than any emotionally driven response to the impact of their colonial occupation. There's simply nobody in the narrative positioned to have that response, which for me was an enormous disappointment in what was otherwise a highly accomplished series.

I therefore can't say how happy I am to have Sancia front and centre of Foundryside. Without spoiling anything, Sancia has firsthand experience of the most violent, exploitative elements driving Tevanne's success, having been a tool for achieving the technological objectives of elites who were utterly indifferent to her value as a human being. One scene that particularly struck me is a pivotal conversation on Sancia's experiences, in which the elite characters she is working with express disapproval at a specific "illegal" thing that was done to her. Sancia throws this back in their faces, pointing out that this single illegal thing was no worse than the years of legal exploitation and abuse she was subjected to, and calling out the privilege of those who accept that that any level of exploitation is acceptable for progress because they don't believe it could be them under the wheel. Foundryside centres the political elements of its plot in the narrative of its most marginalised main character, and that makes an enormous difference to how these are handled. It's not all-encompassing (what novel could ever be?) and there notably seems to be no racial component to Sancia's experiences, which means her experience of "escaping" discrimination and othering is quite different to a lot of real world examples. However, the elements it does include worked wonderfully for me, and I can't convey how happy I am that I am finally getting what I've always wanted from Bennett's writing. Dreams do come true, kids.

It goes without saying that the most impressive thing about Foundryside is the author's ability to psychically predict and incorporate my previously unwritten plot recommendations. Luckily for everyone who isn't me, this is backed up by plenty of technical excellence and a satisfyingly twisty, fast-paced plot. Although this is billed from the start as a trilogy, everything within this book does largely wrap up in a satisfying way, although the last couple of pages are dedicated to a slightly unnecessary cliffhanger; there's also plenty to be explored with these particular characters, which suggests that unlike the Divine Cities, the next book is likely to be a continuation of the same story rather than a branching narrative. The characters are another highlight: obviously, Sancia is great, but her allies and enemies are equally compelling, combining the best elements of "satisfyingly tropey" and "interestingly original" from stoic, honour-driven Gregor Dandolo to grumbly inventor Orso Ignacio and his long-suffering colleague Berenice. As an aside, while characters have little time or emotional energy for romantic attachments, queer identities are represented and form part of the book's relationship building, in an understated but unmistakable way.

In short, Foundryside is the work of an author at the top of his game, and I highly recommend it to anyone interested in smart, politically relevant fantasy. With it, Bennett secures his place in my list of favourite authors, and gives me a book that I not only enjoyed reading, but am going to be able to recommend to people without the slightest hesitation.

Bonuses: +1 An opening that made me feel like a kid meeting Aslan for the first time; +1 political dynamics where a marginalised character's concerns are front and centre

Penalties: -1 A book this good doesn't need a cliffhanger ending to get me to buy the sequel!