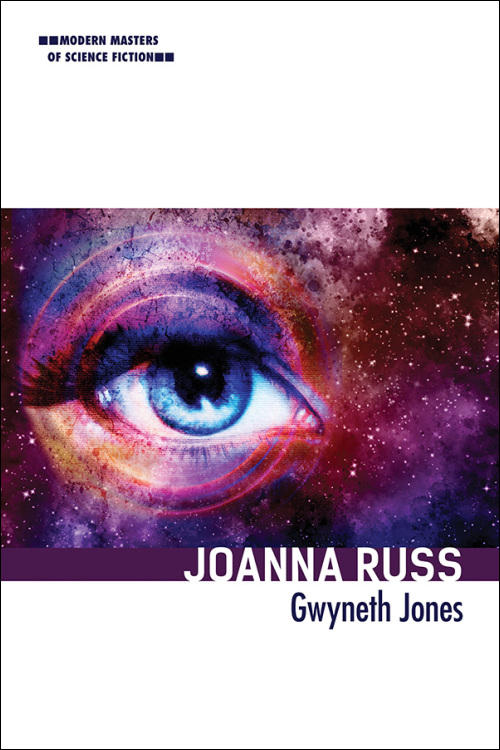 This academic biography, written by Gwyneth Jones, is one of the latest in the University of Illinois' Masters of Modern Science Fiction series on the works of prominent science fiction and fantasy writers - and the first of the series I've actually read. That means I don't have much to compare the particular style to, but I enjoyed the largely chronological deep dive into Russ' works, encompassing novels, short fiction and her extensive review work, much of which was unknown to me. In doing so, Jones charts - sympathetically but with an eye to contradictions and tensions within Russ' identity - her journey within science fiction, from a talented but not challenging fiction writer and a reviewer more likely to judge her female peers harshly while offering men a free pass for much worse books, to the explicitly feminist writing and stances which readers are more likely to associate with her today.

The focus here is very much on Russ' work and the highlights for me were reading the deep critiques of Russ' novels, particularly The Female Man and We Who Are About To (a work I tackled during Feminist Futures last year). Jones's reading of The Female Man, in particular, was interesting in the way it presented a radically different lens than the one I had read the novel in, taking the different aspects of the Joanna personality as a reading of identity across time rather than dimensions. It's a reading which brings Russ into conflict with her own identity as an SFF writer and Jones doesn't hold back from the implications of that reading, tracing it throughout the rest of her work and noting where the seeds come in at earlier points. If, like me, you don't often approach literature from a strongly academic lens, some of this will probably be well in the realms of "well I'd never thought of it like that", but it never comes across as particularly prescriptive or inherently dismissive to other readings, so I was able to enjoy the different ways of thinking about the texts rather than feeling put in my place by them, as is always the risk with more academic takes.

What I was missing from this - and, again, I'm not sure if this is me asking this book to be something it's not - was a greater elaboration of Russ 'relationships with others in the genre. There were some interesting gems of interaction here, notably the roundtable on "Women in Science Fiction" which took place over a period of years with other participants including Suzy Charnas, Samuel Delany, Ursula K. Le Guin, Vonda N. McIntyre, James Tiptree Jr and brought together by fanzine editor Jeffrey D. Smith, which gets a lot of attention - and which I'd love to learn more about! However, given the breadth of written correspondence which most writers were engaged in at the time, the lack of focus on how Russ was being received by her contemporaries - beyond those who were clearly afraid of what she represented, and its impact on her work - was an area I wish could have been incorporated more in the text.

All in all this is an interesting experience, if sometimes a little routine - collections of short stories are looked at together, followed by review periods, followed by the novels, in a chronological march that doesn't leave a lot of room for novelty. But despite the limitations of coverage and perhaps of the form, this is one to look out for, especially fans of Russ' work who want to read a more academic perspective on her writings, and I hope this is a contender for next year's Best Related Work Hugo.

This collection was released at the two year mark of Marie Brennan's Patreon of the same name, which publishes an essay per week on topics of interest to speculative worldbuilding, challenging creators to think about aspects of their fantasy or science fiction worlds which might not have crossed their minds. While I'm not in a fiction writing stage of life myself, I enjoyed the first year of essays which incorporated everything from plate tectonics to cannibalism, and this second volume delivers  the same experience on a similarly broad range of topics.

The essays are grouped into thematic areas, slightly separately from the Patreon itself, reflecting the experience of reading in a book rather than as week by week essays. It works well, and there's an impressive minimum of overlap even in those essays with similar subjects - its generally clear when a series has actually been written and posted in sequence, but there's no obvious drawbacks or unintentional skipping around even when it hasn't. Essays are bite-sized, running a couple of thousand words, and unpick both the technological and societal elements of each area being covered. That means that, for example, the series on weapons and armour which makes up the first few essays first looks at both the possible weapons one could use to do some duels, and the societal concepts of masculinity and honour that go into the culture of duelling, before looking at the historical contexts of duels themselves. Its all done in a way which draws mostly on Brennan's own areas of relative expertise (she did most of the work for a PhD in Anthropology before becoming a full-time writer): Japan and Europe come up a lot, as do the Pacific Islands, but there's an acknowledgement that this is far from the full range of real-world examples. Immediately after reading, I was torn on the question of whether guest entries from experts with different geographical or subject areas of expertise would improve the reading experience (either on Patreon or in book form), but regardless of the answer I don't think it detracts from what New Worlds is, which is effectively a series of writing prompts that challenge worldbuilders to go away and do their own research, rather than offering a full range of examples.

As well as weapons and duelling, the Year Two collection covers beauty and body modifications, clothing, weddings and courtship, writing and literacy, the societal concept of time (briefly discussed in book 1 but the subject of multiple essays here), religions, and superstitions and the supernatural. As in the previous collection, it closes with four more "meta" essays on the concept of worldbuilding itself which cover a little more of the "how" of what speculative worldbuilders might do with the prompts covered here. There's plenty to talk about under each of these concepts and a nice mix of "foundational" (clothes) and more "niche" (honeymoons, incense, "the social economy of clothing") topics - there's no sense that Brennan is at all running low on ideas or struggling to find topics of general relevance to write about. Perhaps because of their genesis on Patreon, the style is chatty and often quite informal, and there's no pretence to academic rigour on the historical examples; there's no citations here, and a few points where the text outright states something like "I know I've read an example of thing X, but I don't remember what it was". It doesn't affect the book's ability to do what it says in the tin, however, and as thought provoking elements the veracity of the examples given here (none of which stray into territory that I would consider particularly controversial or open to misinterpretation) isn't really the point.

The elephant in the room when reading these in ebook is whether this format adds to the reading experience - and, honestly, I don't think that ebook or Patreon lets these essays shine to their fullest extent. Patreon's system, while it has a lot of strengths and is linked to a monetary system that allows authors like Brennan to do this kind of work in the first place, isn't inherently great for archiving posts and allowing users to search for old content, and ebooks are similarly much harder than physical books to flip through and search for things rather than reading cover to cover. Luckily, Book View Cafe also has you covered if you want New Worlds in physical format - and I suspect that for people who really want this for its intended purpose, that's the version that is most going to allow its content and usefulness to shine.