This week's big comic book news is that Netflix has picked up Jeff Smith's Bone for an animated series! With the rise of Disney + and other streaming platforms, Netflix is going to have to rely heavily on its original programming and the addition of one of my family's favorite series has me quite excited. 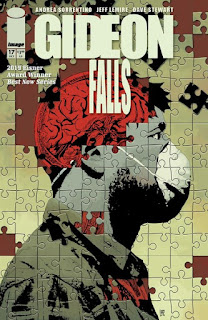 Pick of the Week:
Gideon Falls #17 - I am beyond thrilled that this story from Jeff Lemire and Andrea Sorrentino has being developed into a television series.  The new arc reaffirms how gripping this universe is and how intriguing the allure of the Black Barn is. This book won the Eisner for best new series in 2019 and Sorrentino should have a strong chance of winning an Eisner for Best Writer/Artist as the visuals are some of the most effective I have seen in print. This arc opens with Norton's father trying to regain his own consciousness after being taken over by a being in the Black Barn. Watching his internal struggle completely draws you in as a reader and puts you in his mental space. In addition to the gripping element of Norton meeting his sister and father despite having no memory of them, Father Fred and Dr. Xu are tasked with something big from a group of priests. This arc is setting up to be quite intense and I look forward to seeing what direction it goes.

The Rest:
Trees: Three Fates #2 - Sasha's investigation into the murder that took place last night is uncovering few answers and more questions. The autopsy confirms that the body was dumped at the site and that an altercation, leaving one person injured, accounts for the blood at the scene. That is the gist of the ordinary parts of this tale, but the supernatural elements bring in some fortune telling, time travel, and sabotage from a mysterious visitor that will likely cross paths with Sasha.  Having never read the original series in its entirety, there are elements that are confusing, but Warren Ellis does a nice job of developing a mystery that draws the reader in.  I am really enjoying the first two issues of this series and it reminds me a bit of Dept. H from Matt Kindt.  That is a compliment.

Captain America #15 - As Captain America still seeks to clear his name, he learns that this will be a difficult task as long as Fisk is Mayor.  He is coming to grips that the Daughters of Liberty, who are protecting him, have a different approach for finding answers and are likely tracking his every move. He isn't sure how much he can trust them, but they have given him little reason not to.  The investigation in to who framed him takes an interesting twist as some surveillance footage that was not easy to obtain reveals that the Scourge of the Underworld may be behind it.

Star Wars Adventures: Return to Vader's Castle #3 - This week's spooky issue gives heavy reference to Little Shop of Horrors, but instead of Aubrey II, we have a pet sarlaac which is causing more mayhem than a State Farm Insurance commercial.  The story sheds some light on Asajj Ventress prior to her joining the Sith.  Like the other issues in this series, it is an entertaining read a good break from the heavier titles I enjoyed this week in Gideon Falls and Trees. Definitely not my favorite book by a long stretch, but one that is entertaining and appropriate for some light October reading.