Microreview [Book]: The Resurrectionist of Caligo by Wendy Trimboli and Alicia Zaloga 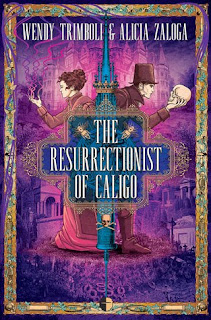 Sibylla is a princess, in a world where only the elite (including the royal family) are born with magical gifts, leading to jealously guarded bloodlines and inbreeding within the nobility. Roger Weathersby is a resurrectionist and aspiring doctor, trying to fund informal medical studies by providing the cadavers which medical professors need to dissect and learn from. Despite the differences in their background, almost insurmountable in such a status-driven society, Sibylla and Roger are former friends and had a brief romantic history in their teenage years, but that's very much behind them - until Sibylla decides to bring it up in a letter, and then Roger is arrested for a series of murders he didn't commit and the only way out of being hanged for them is to submit to an ancient form of enslavement which will give Sybil complete control of him for the rest of his life. If this seems like a good basis for a slow burn romance, you're right - but Resurrectionist of Caligo isn't delivering this in full. Instead, this is a story about the two protagonists coming together over the injustices and prejudices of their highly stratified society, and attempting to leverage their limited agency to bring down a killer who the rest of the world seems uninterested in bringing to justice.

Resurrectionist of Caligo moves in two very different worlds: the intersection of the working class and academia which Roger inhabits, needed by but never accepted by members of the latter; and Sibylla's repressed court existence, dictated by her Grandmother the Queen. The range of characters in the former turn out to be significantly more interesting and sympathetic than the latter (Sibylla has three "Cousin Eds" who I didn't even try to learn to tell the difference between) and Roger's story also escalates much more quickly, with far more immediate consequences, than Sibylla's, meaning for much of the book it was his sections I was most engaged by. In contrast, much of what engages Sibylla: her return from several years of enforced seclusion after refusing an arranged marriage to her cousin, and her designs on making a mark in diplomacy with a neighbouring-closed off kingdom - are issues that feel only tangentially related to the main plot as its presented to us. This is thoroughly driven home by the scenes in which Sibylla engages with the sections of society which literally pray to her (as a sort of fertility goddess, which she has mixed feelings about) and finds out about the Strangler through a plea for her intervention; she resolves to do something about it but is soon blown off course by external events and ends up more engaged in her Grandmother the Queen's marriage schemes instead.

The plot itself moves slowly, and its one of those books whose blurb conditions don't actually get set up until quite far through the first half - with the effect that a lot of what should be the first act is spent speculating on how its going to get to the promised premise. Once there, Roger's criminal conviction ends up being a curiously weak barrier to allowing him to continue exactly as before, although it does bring him into the orbit of a slightly hard-to-pin-down but entertaining brother. What this means is that the effect of what should be a deeply tense and uncomfortable magical binding - one which comes with a presumption of criminal guilt and infamy which ought to be life-changingly horrible - is undermined until the last act, when it comes home to roost in a pretty significant way; even then, we don't get the scenes of what this binding means day to day for Roger and Sibylla until the novel's aftermath, when it feels like that bringing that reality home a bit earlier would have underscored some of the intended tension of this particular setup.

The strength of Resurrectionist of Caligo is in its synthesis of the history of medicine with an intriguing gene-linked magic system providing a basis for the magical talents of the royal family which will make those with a basic understanding of dominant and recessive genes go "oh, it's related to that". The driver of medical curiosity in this story from Roger are what allow his sections to really shine, and there's enough real-world science and history of medicine in here to make the system satisfyingly scientific without being overreliant on "realism". Sibylla's sections of the narrative do a good job of demonstrating why the "purity" of the royal family's bloodlines, with their party tricks, are important enough to create their inward-looking political system, with so little interest in the outside world that even the overtures of an important neighbour at a point of possible crisis are barely enough to break through tradition. In this context, the eventual direction of the mystery makes a horrible sort of sense, although it's also a smack to the face of the rare forces in the novel who are attempting to address the injustice in a slightly more systemic way. Class warfare might eventually become a part of this world, but its certainly not the focus of this particular story. Add into that the homogeneiety of the society, both in Sibylla's circle and Roger's, and the result is a pretty conservative read - oddly so, given the incorporation of a Victorian aesthetic into a distinctly more closed off monarchy means jettisoning the aspects of global imperialism that made Victorian culture possible in our own world.

As noted above, this is not one for people looking for a capital-R romance: although Roger and Sibylla have a romantic history, the enemies-to-lovers-with-a-history romance element is being set up as a long game, if it's happening at all. That said, there's clearly still feelings between the two, which are well explored despite being from the perspectives of two characters attempting not to admit it to each other or themselves, and the "will-they-won't-they" angle is likely to be just as enjoyable to many readers as a happily ever after. There's also a complicating factor in the form of an enigmatic emperor, around whom Sibylla apparently forgets all pretences to diplomatic nicety in favour of entertaining but ill-advised escapades - not necessarily out of character for a young, sheltered woman with a demonstrated lack of impulse control, but it's a little convenient. The emperor doesn't bring a huge amount of character beyond his role as a third point in a love triangle, but there's potential for this to get quite nicely complicated in future volumes, if that's where the series is going.

All of this adds up to a book that I enjoyed, and which certainly has elements of novelty - particularly the synthesis of medicine and magic - but which struggles to meld together its dual narratives, stoke the tension of its creepy central magic premise, or bring enough texture to its wider worldbuilding to really make the concept sparkle. However, fans of Victorian-era fantasy (who don't mind reading a homogenous version of that worldview) will no doubt enjoy the setting, and fans of enemies-to-lovers who don't need an HEA will find Roger and Sibylla's dynamic scratches that itch, especially if the promise of further books in the series comes through.

Bonuses: +1 A satisfying mesh of medicine and magic

Penalties: -1 Sibylla's subplot meanders compared to her more exciting co-protagonist; -1 Weaknesses in the overall setting aren't overcome by the novelty

Reference: Trimboli, Wendy and Zaloga, Alicia. The Resurrectionist of Caligo (Angry Robot, 2019)
Posted by Adri Joy at 12:00:00 AM