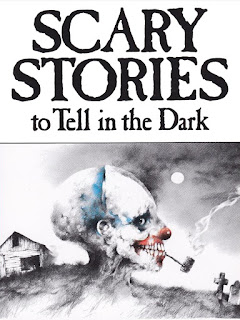 Much of the genesis for this series came to me when my daughter asked if I would take her to see the Scary Stories to Tell in the Dark movie. Those three original Alvin Schwartz books (with their oozing, teeth-filled illustrations by Stephen Gammell) were a staple of my childhood, and while Christopher Pike, R.L. Stine, and a couple other authors were working in the middle-grade horror space (although I'm not sure if Goosebumps itself was a thing yet), I wound up giving those a miss and leaping straight to Stephen King at a pretty young age.

I think the first Stephen King book I read was Christine, because I dug old cars. But relatively quickly, I found myself immersed in what was at the time the Dark Tower trilogy. There are things I read when I was 12 that still stick with me. "Go then, there are other worlds than these," is a line and moment that has never been far from me since. The Eyes of the Dragon was another pivotal King novel for me, because it was my introduction to fantasy. By the time I read it, I had friends that were big into Lord of the Rings, but that series and world had never interested me before. After reading Eyes of the Dragon, however, I quickly scooped up a copy of The Hobbit in the next convenient book sale.

I've spent most of my time in this series talking about movies because that's really my area of relative expertise, but reading scary stories was a huge part of my own, youthful indoctrination. So I reached out to the rest of the NoaF flock to see what their experiences with horror were as young readers, and if there were any noteworthy titles we could pass along.

Like they were for me, the series of Scary Stories to Tell in the Dark books and the novels of Stephen King were the gateway to horror for many of our writers who got into the genre at a young age.

Dean made the interesting recommendation of Roald Dahl, who I wouldn't have thought of, but it's a very astute suggestion. I read Charlie and the Chocolate Factory to my kids many times, as well as The Fantastic Mr. Fox (big fans of the movie in my house), but it wasn't until I was reading them The Witches, when I caught myself thinking, "Wait...this is waaaay dark." Dean also recommended A Series of Unfortunate Events, which skews more creepy and sinister than outright horrific, but is certainly in the same neighborhood that we're discussing.

Adri writes, "Maybe the single biggest horror influence in my young life was Robin Jarvis, especially the Deptford Mice trilogy, which was about a group of anthropomorphic mice struggling against the influence of an all-powerful evil cat god. Horror highlights included the trip to the countryside with a series of murders descending into scenes of creepy ritual in the middle book, and one character whose final fate is to get banished outside of the main timestream so he experiences the world an instant behind all other living things. The worldbuilding was dense and bizarre, the story was totally cool with killing off characters (the first book literally opens with the father of the main family getting eaten by the god-cat), and I sincerely hope they still hold up today because in my memory they were amazing."

In addition to another vote for Scary Stories..., Chloe offers this: "As the former child who at age 4 watched Aliens so much she wrecked the VHS and whose 8-year-old sick day reading was The Stand, my suggestions for what children can handle is, um, skewed. But — Goosebumps, Coraline, a lot of Robert Westall's stories (more for 10+ ages), and Something Wicked This Way Comes." I was very pleased to see this one show up on her list. Something Wicked... is probably my favorite Bradbury novel, for what it's worth.

There is, to be sure, a certain solitary pleasure in horror. A musician friend of mine, who is one of the most amazing drummers I know of, she recently shared the unattributed quote, "Sometimes the fear won't go away, so you'll just have to do it afraid." And that stuck with me.

As much fun as it was to read Scary Stories to Tell in the Dark with friends and enact the jump-scares built into those books, most of our true fears are quiet, and private. And while there is magic in watching a scary movie among friends (here I recall my 15th birthday, spent as a sleepover with an all-night marathon of movies like Silence of the Lambs and Mario Bava's Black Sabbath) or even among strangers in a theater, so too is there a sense of growing up, of the passing of rites, in huddling under bedclothes with a flashlight and a scary book, and walking through the fire by oneself. The flames may resemble ghosts, or goblins, or dead friends or uncanny versions of relatives, rabid dogs or haunted cars, terrifying lands full of magic or mystery, or a carnival come to town. However they shake, and whatever shadows they cast, eventually we must each face the flames on our own.

This is, to me, the great gift of horror, and why I have thought so much about passing it on to my kids. No matter what movies I watch with them, there will be scarier ones out there. Just like no matter what challenges in life I attempt to prepare them for, there will yet be greater ones ahead, entirely unlooked-for. No matter how I try to cushion the blow that ultimately lets them know there is profound, inexplicable evil in this world, I know that blow will always fall. The best I can do is lay the groundwork for the next, more frightening movie, or the next, more frightening revelation, and hope that, however feebly, I have helped them to cultivate the tools necessary to confront it.

Posted by Vance K — cult film reviewer and co-editor of nerds of a feather since 2012. Late-night, white-knuckled page-turner since...approximately...the man in black fled across the desert, and the gunslinger followed.
Posted by vkotrla at 12:00:00 AM