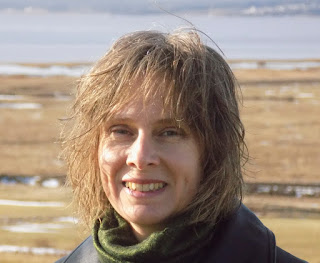 Originally from Kingston, Ontario, K.V. Johansen has an M.A. in Medieval Studies from the Centre for Medieval Studies at the University of Toronto and another, in English Literature, from McMaster, where she wrote her thesis on Layamon’s Brut, an Early Middle English epic poem. She’s been writing fantasy since childhood and has a lifelong fascination with history, archaeology, trees, and language. She also plays guitar with great determination and dedication, moderate technical skill, and to her enduring regret, an utter lack of musical talent. In addition to her secondary world fantasy for adults, she is the author of two works on the history of children’s fantasy literature, two short story collections, and a number of books for children and teens, some of which have won awards and various of which have been translated into French, Macedonian, and Danish. She lives in New Brunswick on the Bay of Fundy and spends too much time on Twitter, @kvjohansen. Her website is at www.kvj.ca.

Today she shares her Six Books with us:

I’m often reading several novels at once in fits and starts, and some non-fiction too -- right now, Timber Castles, by Robert Higham and Philip Barker, and Eric Christiansen’s Northern Crusades. At the top of the fiction stack of things on the go is RJ Barker’s Blood of Assassins, the second in his Wounded Kingdom trilogy. I’d read the first one a while ago, but only picked this one up recently, in part because I couldn’t make my mind up whether I liked the protagonist and narrator Girton, the apprentice assassin, or not. I’m still not sure if I like Girton as a person, but he fascinates me as a character, and I’m still chewing over why I feel as though I’m holding him off at a bit of a distance, emotionally. That’s success, from a writer’s point of view, of a kind (I hope RJ sees it that way!) -- creating someone that people can have a complicated reaction to. There’s some excellent writing in these books. One thing that really impresses me about the series as a whole, from the technical point of view, is the excellent use of the first person; it’s a rich secondary world and story that is very complex in psychology, plot, and politics, which can be difficult to do justice to with a point of view limited to one person, even when the narration provides some historical distance and space for reflection on the part of the narrator. It’s just a great story, too, lots of twists and turns, and beautifully-written.

There are several. Martha Wells’ Murderbot novel, and K.D. Edwards’ The Hanged Man, are two that are high on my must-read-as-soon-as-available list, but the one I’ve been particularly waiting for a while now is Sidewinders, the sequel to Robert V.S. Redick’s Master Assassins. It’s the story of two brothers, conscript soldiers on the run from a theocratic tyrant, with an complicated family history behind them. One’s a very responsible, serious sort of man; the other’s possibly mad, or possessed, or damaged by something in his past, or just irresponsible and impetuous. Even his brother isn’t certain why he fits into the world so badly. They don’t like each other, but they’re brothers, both feeling they’re bound together by that regardless. The world is an interesting concept -- a continent quarantined by the more technologically-advanced rest of the world because of a deadly disease to which its inhabitants seem to have resistance, but which sends medical missions out to them, kept carefully isolated from any contact with contagion, magic, a theocratic tyrant with some rather horrific forces at her command. By the end of the first book Mektu and Kandri have survived everything sent to destroy them so far, acquired some equally well-developed and interesting companions, and discovered a little more about the mysteries of their world. They’re at that point where you and they can pause, take a breath, and face up to the next onslaught you know is coming. According to Redick’s blog, it is coming, but there’s no date yet.

Re-reading is interesting. Sometimes it’s just a quiet impulse, or you pick up something because you’d like to enjoy that again or remind yourself of it in some way, but sometimes it’s an intense craving. When it’s the latter, it can be a need to escape into something familiar from some stress or worry or heavy weight on you, but often I find that the thing I felt such an urgent desire to re-read turns out to have something in it that resolves some quandary that I’ve been wrestling with in my current work -- it’ll be something to do with the narrative approach, or how difficulties in a character are set up, or a way of touching the story, that reminds me of what I need to be doing or sparks off something that solves my problem, shines a bit of moonlight on the path I’ve been stumbling in the dark to find. It’s like some underlayer of my brain knows what’s missing or where I’ve gone wrong in the WiP but doesn’t have any words of its own, so it points me at something that will show it to me. I’ve had that experience with LeCarré and Bujold, though most often it will be Diana Wynne Jones or Cherryh. The thing I most recently had an intense desire to reread was McKillip’s Kingfisher, which I’ve read a couple of times, but this time I bought the audiobook because I felt like I needed to have it read to me. Aside from the sheer enjoyment of the work, which is one of her best, what I’m taking from it on this re-read is a reminder of her lightness of touch, something I’m trying to achieve in my current project.

4. How about a book you’ve changed your mind about -- either positively or negatively?

How about a series? Discworld! (I hang my head in shame ...) The thing is, when I was a teen, people kept telling me, oh you like fantasy and science fiction, you’ll like/the bookseller said you’ll like X, and I always hated X because it was always appallingly poorly written, clunky, bad imitations of Tolkien by (usually) Americans utterly tone-deaf in language, writing plots about swaggering teen boys (even if they were ostensibly adults) in which girls were barmaids and prostitutes and rape-victims and prizes. So all that, “Oh you like fantasy so you should read Boy On Quest” stuff that older people kept pushing at me was just trash and I stopped even trying it. And since it was so hard to find the kind of fantasy I was hungry for, I had no patience with the shallow it’s-all-a-game stuff, though I did stick with Aspirin’s Myth for a few books. No stomach for cotton-candy when I was having such a hard time finding proper bread. With a few exceptions -- Bellairs, Blaylock, Cherryh, Cook, McKillip -- when it came to adult fantasy I mostly trusted British writers, when I could find them, and the British publishers tended to have quite distinctive art -- either landscapey, or Robert Gould. And there was Pratchett, and those covers, either original Corgis or the even worse (because not even good art) Roc editions, said to me, “Hey, we know this is not a real story but just a silly game.” So I dismissed it on sight as just another shallow spoof, or worse, another bad Tolkien imitator who was going to be a waste of my five dollars. (Why did I not open it up and read a few pages? I do not know. My friends and I could all quote numerous passages of Hitchhiker’s; we’d have loved Pratchett if only one of us had bought one back in 1985.)

And then many years later, I picked up a copy of Johnny and the Bomb that my sister was reading. I read it in one go, and then I started it again. Then I went into town, to the used bookstore (there wasn’t a new book store in that place), and by some miracle they had Guards! Guards! and Maskerade. So that was that. I wonder if I’d have bounced off the Discworld again if all I’d found was The Colour of Magic? I think not, because having read Johnny, I knew Pratchett could write, and write a story that felt real and true at the story level even in the moments when it was being utter farce, and that was the most important thing. But I am very glad that the two I did find to take me into the Discworld at last were from the start of the apogee.

Moral: don’t judge a book by its cover. Really. Don’t do that.

I’m torn as to whether to answer The Lord of the Rings or The Lantern Bearers. The Lord of the Rings is the obvious answer for many reasons: poetic prose, the sheer range of tone, of diction that changes to suit character and mood and mode, landscape you can see and feel and smell, layer upon layer of history sinking back into a legendary past, languages and trees and archaeology pushing through. The slow-gathering doom. The need for individuals to take heroism upon themselves, the importance of finding wonder and delight in the world. I read it repeatedly one winter when I was eight and it’s the one book that has shaped me in so many ways -- it sank language into my bones. But another profound and lasting influence is Rosemary Sutcliff, in particular her books like The Lantern Bearers and Dawn Wind, strong characters, dark but hopeful, with light always breaking through, beautiful writing and such a sense of place, or the more grim Mark of the Horse Lord and Song for a Dark Queen. I think the tone and mood of Sutcliff at her darkest leaks through into The Last Road more than I realized, now that I look back over it.

My latest book is The Last Road. It’s the fifth and final book of Gods of the Caravan Road, which is secondary world epic fantasy, silk road fantasy. Why is it awesome? Most of the main characters, the no-longer human ones, from the earlier four books (and the short story “The Storyteller”, which is the very beginning of it all), are still around, and come together in this, because a threat against all the gods that has been quietly simmering underneath everything else that was going on right from Blackdog has burst out of the shadows and is sweeping east across the world, destroying people and their societies and their gods as it comes. The mood of The Last Road is darker than what’s gone before. Hope seems harder to come by. But finally, we get to see Moth and Yeh-Lin together, which I’ve been wanting to do for several books now. It turned out not to be the scene I had in my mind, involving them hanging out drinking wine in a tavern which looked suspiciously like the place where Navarre acquires Philippe in Ladyhawke, but something with less wine and sunshine, and rather bloodier. (Yes, rather bloodier even than that.) And of course, Moth being Moth . . . and very, very angry in this book . . . things will burn.