Halloween is rapidly approaching and this is your weekly reminder to head to your local comic book store to place your order for the Halloween ComicFest mini bundles.  They are great to hand out on Halloween and should be enough to prevent the troublemakers in your neighborhood from egging or teepeeing your house. 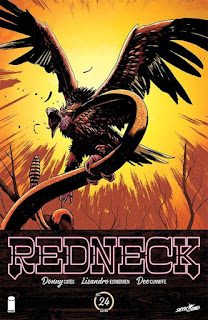 Pick of the Week:
Redneck #24 - Holy hell that was one intense issue! Donny Cates mentioned that there is going to be some downtime prior to issue #25 and I think I will heed his advice and re-read this series. Things started out as Perry stepped in to save Greg from Carrona, but when you are attempting to stop a potential war by taking out an elder things are not going to go as planned. Flash to JV and July fighting off a gaggle of demons when July makes a desperate call and cries out to Bartlett. Bartlett's return was absolutely epic, from how he burst out of his coffin and declared that the Bowmans would not be running anymore.  Lisandro Estherren's work throughout this series is Eisner worthy and this issue highlights the range that he brings to this book. The gory scenes deliver, yet there is a softer side that you see when the Bowman family is speaking to one another. I cannot freaking wait for issue #25.

The Rest:
Secrets of Sinister House #1 - While I normally balk at a $10 comic, I was tempted into picking up this collection of horror stories from DC based on the fact that it contains eight different stories and a wealth of talent, including John Layman, Rafael Albuquerque, and Phil Hester to name a few. I was particularly impressed with Albuquerque's vampire Batman story and Layman's take on a haunted house in "House of the Dead." The collection featured some basic horror tropes set in the DC Universe and was simply delightful. This ended up being the perfect Halloween book for the week and I look forward to the other DC horror plans they have for the rest of the month.

Star Wars: Target Vader #4 - The trap is set and the cyborg Beilert Valance is taking his one shot at taking out Darth Vader. He has an EMP device that should shut down Vader's electronics, but he needs to get close enough for it to be in contact with Vader.  Using a team of misfit bounty hunters, what could possibly go wrong?  Based on the events of the last book, I wasn't sure how they were going to extend this series to six issues and after the sheer number of limbs that were sliced off at the start of this one I had even less doubt, but the twist at the end when Valance is ready to trigger the EMP device has me ready for the fifth issue.  I like that there were snippets of each bounty hunter's past sprinkled throughout.  I have definitely enjoyed this series more than I expected to.