This is Not a Review of The Joker

I have often speculated on why you don't return to America. Did you abscond with the church funds? Did you run off with a senator's wife? I like to think you killed a man; it's the romantic in me. 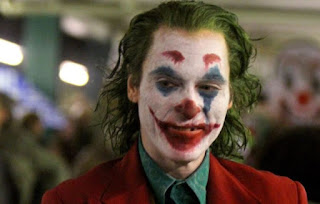 This is not a review of The Joker because, frankly, it doesn't need one. It has been reviewed, and the people who reviewed had the advantage of seeing it, which I lack - mostly because I don't feel the need to see it. I'm not saying it shouldn't exist, nor that it shouldn't be judged on its own merits, because art does have a right to exist - but the right to free speech doesn't mean people should talk incessantly.

To be sure, it looks good. Juaquin Phoenix looks the part every bit as much as Heath Ledger did, even as my keyboard itself revolts against the veracity of that statement. I - like most people, I think - expected Suicide Squad 2.0 from this; a hot mess of flaming garbage foisted upon moviegoers who should know better - yet, somehow, against all odds and whatever DC movies have been this past decade, what we received was an ostensibly compelling narrative of the origin of the one of the most compelling villains of all time.

Which raises two questions, at least for me. Indeed, they are both the same question - why?

In the first place, why do we need to know the origin of the Joker? For all his iterations through film, television and comics, what bearing does who he is and where he came from matter in the slightest? He is a villain for the sake of being a villain, which is a luxury most people writing fiction aren't allowed, despite it being allowed in real life 2019. It works for the Joker precisely because he is The Joker - insane, given to sadistic whimsy, crafting ornate plans while simultaneously not having one at all. He works because he doesn't have an origin. His adversary, Better Elon Musk, is all backstory. Rooted in his childhood trauma, he puts on a mask to keep it all out. Joker is what he is, unapologetically, always in pursuit of his mercurial goals, but doing what it takes to achieve them - Bats will give up his to protect a life, never willing to make the sacrifices truly needed.

In short, Joker works narratively because he is the perfect antagonist for Batman.

So if you tell me there is a compelling Joker story out there, I am all in. But this movie leads to yet another why - why does it need to exist? Why does it need to exist, specifically in 2019, where we have villains aplenty, particularly of the variety that this film is asking us to sympathize with? Now, there is certainly a place for a sympathetic villain -  they are usually the most compelling. But when we live in a world where real, actual human beings are holding up the Joker and his ilk as heroes, not because of their struggles, but because of their violence and lack of sympathy for the world around them, why are we making this movie?

There is a lot of validity to telling stories outside the traditional Heroes Journey, gets-the-girl and saves-the-world narrative. The same is true of flawed heroes, something other than perfect knights-in-shining armor. None of those things are real or particularly relatable. People are evil and selfish for a myriad reasons; we don't need to explore their backstory every time. We certainty don't have to empathize with them, or be asked to agree with them, or give tacit approval in the way we are so often in the real world as long as it doesn't affect me.

So why don't we empathize with a flawed hero, who maybe doesn't get the girl, who maybe doesn't win, but instead takes the hand they have been dealt and does the right thing with it? Richard Blaine, to whom Renault is speaking in the quote up top, is that (and one of the many reasons Casablanca is a perfect movie, but more on that another time). His arc is him going from being a cold isolationist, with no regard for the people or world around him, because he Didn't Get The Girl, to realizing there are things larger than himself and making sacrifices for that - including the girl he's been pining after.

Individuals matter. People matter. Everyone should feel loved and accepted for who hey are. But it is all too common to see subsets of humanity care about themselves, how they are treated or mistreated or how they perceive they are, and lash out because of it (instead of, ya know, taking a shower and getting out of their internet echo chambers and doing something with their lives that would lead to them being loved and accepted, but I digress).

Art is simultaneously a reflection of who we are, and an image of what we can be. Let's make art that asks us to be better than we are.

Dean is the author of the 3024AD series of science fiction stories (which should be on YOUR summer reading list). You can read his other ramblings and musings on a variety of topics (mostly writing) on his blog. When not holed up in his office  writing, he can be found watching or playing sports, or in his natural habitat of a bookstore.
Posted by Dean E.S. Richard at 12:00:00 AM