The other day the wife and I decided to check out Stumptown.  The show appeared to have some solid buzz, had a decent splash at SDCC, and was based on a book by Greg Rucka that is also supposed to be quite good. We haven't watched the second episode yet, but enjoyed the first one to the point that I would recommend giving it a shot. I was impressed with the cast of characters and after watching the first episode I might have to pick up the Oni Press book as well. 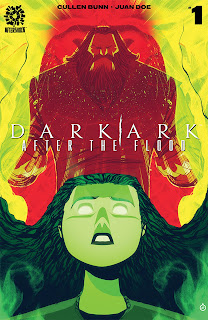 Pick of the Week:
Dark Ark: After the Flood #1 - This book is built on the premise that there were actually two ark that were built in preparation of the great flood. There is the Noah's ark that most people are familiar with that held two of every animal, but there was another one that carried a much more sinister cargo. This ark belonged to the powerful sorcerer Shrae and has an origin associated with the destruction of a city and its residents. Cullen Bunn is one of my favorite creators and does an amazing job drawing the reader in as we learn about the origin of Shrae's daughter, Kahlee, and a bit about the world following the flood.  It is quite a bit different from the story I was told as a child and I am very excited to learn more about Kahlee and the how and why she survived.

The Rest:
No One Left to Fight #4 - After briefly squaring off with the Hierophant, Vale and company make their way to Arboreal Sanctum. Despite seeking refuge, Kaya is not too keen on opening the door to Vale and the drama that tends to follow him. The Arboreal Sanctum was created as an escape from the rest of the world and trouble seems to follow Vale as he attempts to understand what is happening with him. This is a bizarre, but wonderful series that features some of the best colors in the business via Fico Ossio and Raciel Avila. I have enjoyed the story and the art, but it really is the colors that have completely drawn me to this book.  That and the fact that there is a promise of an issue-length brawl in the next issue as it turns out there actually is one person left to fight.

Star Wars Adventures: Return to Vader's Castle #1 - While I didn't enjoy this spooky tale as much as the others in this series, it felt like a Tales from the Crypt episode featuring Darth Maul as the beast that haunts a labyrinth. On paper that sounds amazing and might have worked better as a multi-issue story, but the one shot made it feel a bit shallow despite the nice twist as to what brought the ship to Lotho Minor, the planet with the labyrinth, in the first place. Despite not enjoying this story as much I plan on picking up the next issue as most of the horror stories in this line have been a lot of fun.

Daredevil #12 - This was a shocking issue that saw both Murdock and Fist get back to their roots. Daredevil is finally starting to gain some of his confidence back and has his first go at taking down a group of bad guys ensuring that nobody gets killed. Meanwhile, Mayor Fist is attempting to rub elbows with some of the elite members of society and has a hard time running away from his criminal past. Electra makes another appearance and the final scene involving Fisk is really going to create some drama moving forward. I am super stoked for issue #13.