A Jewel Bright Sea returns readers to the River of Souls universe first published by O’Dell under her given name, Beth Bernobich, in a story of magic, intrigue, and pirates. 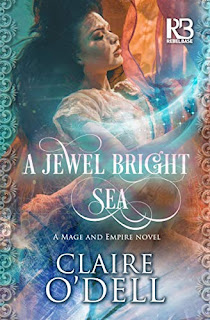 Once upon a time, an author named Beth Bernobich came out with a trilogy of novels, starting with Passion Play, and a couple of short stories in the bargain. In her magic rich secondary world fantasy universe, Bernobich crafted a world in her River of Souls verse where souls reincarnate again and again, seeking each other (or stumbling into each other)  through lifetimes in a way that reminded me much like Katherine Kerr’s Deverry verse. The novels featured interesting and often thorny relationships between the reincarnated lovers, strongly drawn and empowered female characters

In a Jewel Bright Sea, under her Claire O’Dell name, Bernobich returns us to that world.

A Jewel Bright Sea brings us to the Eddalyon Archipelago. Lady VIljana, a Vrou noble in the Empire has journeyed from the heart of the Empire to these tropical islands, surrounded by a retinue of henchmen and guards, as befits her station. Exploring the ancient ruins here, maybe do some sketching, explore and see the edges of Empire--that’s what people with money and power do, don’t they?  Sounds like something that Marie Brennan’s Lady Trent or Jen Williams’ Lady Vincenza might do, right?

But it’s all a head fake. For you see, what almost none of even her retinue realizes is that the Lady Vrou is really Anna Zhdanov, a bonded woman to Lord Brun. And she is here in the tropical islands not for pleasure and mild adventure and spending more money than sense, but she is seeking Lord Aldo Sarresz. Lord Sarresz has pilfered a rather potent magical jewel, you see, and that magical jewels is greatly desired by the Emperor, by Lord Brun and others. And were Anna to get her hands on Sarresz and that jewel, Anna might yet gain her freedom. The fake outward trappings of freedom and adventure might be hers for real.

But, in borderland tropical archipelago islands, there are others who are very interested in Sarresz and his jewel, including more than one set of pirates. Multi Sided conflict, pirate adventure, a treasure hunt and searching for clues for what happened to Sarresz, and more importantly, what he has done with the magical jewel. The race, as it were, is on, and who can trust whom, and who else is carrying secrets besides Anna?

And thus a tale is told.

One doesn’t really need to read the prior series to appreciate this book. Setting it earlier in time than Ilse and Raul’s story and in a different part of the world means that the connections to the earlier novels are feature, and not needed, in order to enjoy what the author does here. Readers who have read the previous novels do have an advantage in guessing how some of the character beats might go especially in terms of the two principals. However, as in the original trilogy, the author’s key and core idea is one that she likes to examine, twist, change and use the idea of reincarnating souls as a strand within the major framework. The novel’s cover “codes” as romance but that is highly misleading. The romantic elements between the two characters is very much backgrounded for the vast majority of the novel. This is an epic fantasy that has romance as a strand and NOT a romance novel set in a fantasy world. The distinction is important, especially in terms of reader expectations of what the book offers.

What this book DOES offer is a rich worldbuilding focused on her magic, and extending into the tropical island setting, evocatively described and brought to life on the page.The author throws us into this world quickly and deeply, and it is an immersive experience.  I am not much of a tropics person, by perceived inclination and also just by lack of opportunity, but this is the kind of novel that made me want to get on a ship and go sailing through a subtropical set of islands, making ports, finding ancient ruins, capturing that experience of sun, surf, wind and sea.

With the brisk movement of action and plot, this is not a languid trip to the tropics, this is a “Catch the morning tide!” sort of adventure. The plot and action beats, with that magic are also good. There are a number of set piece battles and conflicts, with lots of swashbuckling action beats and a fast paced adventure. From magical battles to flashing blades in a port town, the novel keeps the reader turning pages.

In her determination to find her quarry, Anna does not dilly dally, she can’t afford to. She has a prize to win and freedom to be grasped, after all. Similarly, Andreas is a driven and determined pirate captain, who has problems of his own and goals he wants to accomplish that slowly become clear as we learn his backstory.  That story and what drives him is as equally important to him and he is every inch the fascinating character that Anna is. Sometimes I think Anna and Andreas do throw the other characters into a bit of shade as far as their complexity and delineation by comparison..

My major complaint (besides that cover and the expectations problem) with the book is this. With a book that focuses on Pirates, in an archipelago that is on the edge of civilization, a wild place that the main characters are searching for the MacGuffin, a map is sorely missed here. And it would not only have been extremely useful in following and lining up the action, but it would have been really thematic to have a Portolan style chart in a novel where piracy and high seas action is on the menu.

The novel promises a sequel, The Empire’s Edge, which looks to have even more High Seas magic and strong character focused action potential. I for one am very eager to sail the high seas in O’Dell’s world once more.

Bonuses : +1 for a very good central pair of characters
+1 for strong plotting and crackerjack action beats
+1 for interesting worldbuilding

Penalties : -1 for the lack of a map, to give a clearer sense of the geography, important in a book where those geographies are paramount.. -1 for a beautiful cover that does not entirely work with the novel.