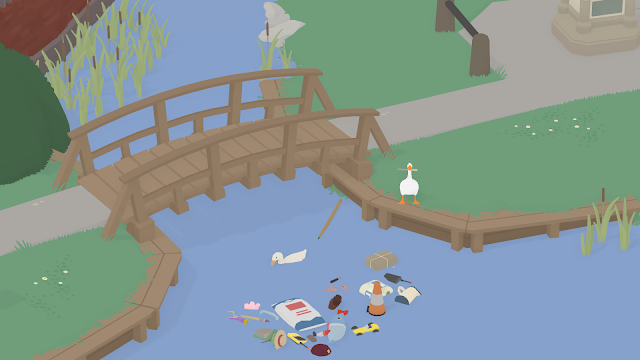 If you've been following the internet at all recently, it will have been hard to escape the meteoric rise of a certain set of memes and crossovers, involving a flatly rendered goose staring dead-eyed out at the viewer, ready to cause problems on purpose. This is, of course, the doing of Untitled Goose Game, the low-stakes sadism simulator in which you take the role of a horrible goose terrorising the residents of an otherwise idyllic English village. Its a game that delivers exactly what it promises in a deeply satisfying way, and which very much deserves the place in cultural consciousness which it is noisily honking its way into.

Having sunk a significant amount of time into the goose uprising - learning the ways of the village, its routines, and what happens to all the items I've been throwing down the well - I have decided, rather than undertaking a review, to resurrect a hallowed Nerds of a Feather institution: the We Rank 'Em post. I now bring my extensive goose game expertise to bear on the objective ranking of the villagers of goose game, from my omniscient perspective as the objective arbiter of their destinies. This ranking has been cross checked using the most advanced scientific principles available to game character analysts today, and was also compiled while I was hungry and therefore very motivated to put down the most straightforward, no-nonsense reasoning I could so as to get on with the more important business of reheating leftover noodles and maybe making a mug cake. With these factors in mind, I present to you: the definitive ranking of untitled goose game villagers.

Honourable mention/God Tier: The Ladies at the Pub 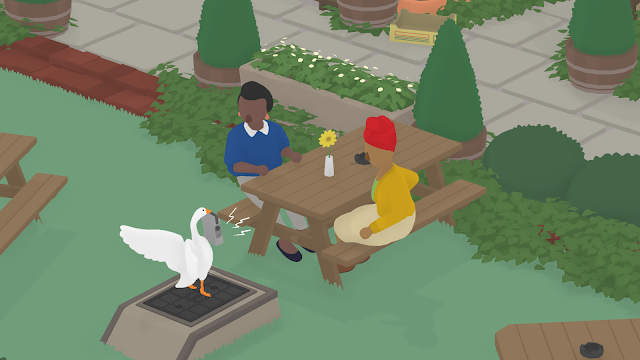 Alone among the villagers of Untitled Goose Game, this pair of endlessly chatting ladies resist any sort of inconveniencing over my horrible goose antics - indeed, they seem more charmed than anything about my ability to honk and flap on command (all for the purpose of flower thievery, of course). Why? I feel there is some deep, complex relationship here; a hard-won truce or pact, perhaps, which the franchise has barely begun to scratch the surface of. I sincerely hope this is something that gets explored via the inevitable proliferation of Untitled Goose fanfiction. For now, the ladies must remain the most enigmatic of the Goose Game's human cast, and must sit outside the powers of ranking in a God Tier category all of their own.

6: The Publican and her Husband 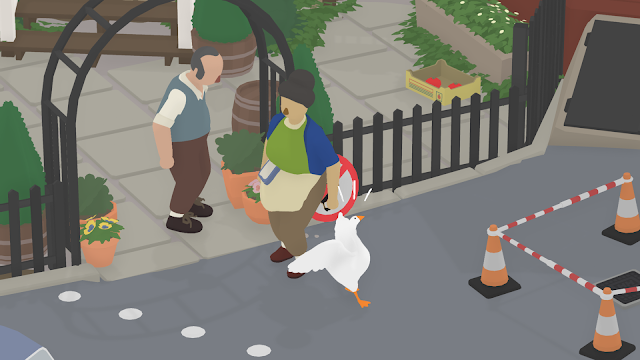 Look, I do a rail commute across London most weekdays, and I get quite enough unwanted jostling from that real life adventure - so this pair of uptight small business owners, with their constant desire to bodily force me out of their space, don't endear themselves to me. Plus, they're landlords, meaning they are clearly even more opposed than the rest of the village to my anarchist anti-property agenda, and it shows - they'd rather have me smash all their pint glasses on the floor rather than accept the impermanent nature of possession and the inevitability of me stealing them all and making everyone drink beer straight from the barrel. The fact that they have spent some of their ill-gotten capitalist gains on creating an actual printed metal "no geese allowed" sign for their property, rather than the endearingly ineffective handmade signs of the rest of the village, cements their place at the very bottom of the village index (aside from the other people I haven't even bothered to rank). 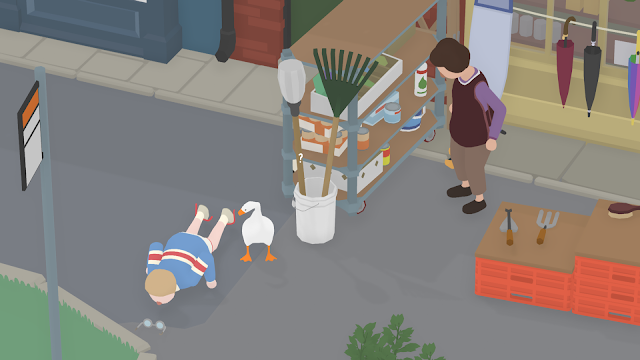 Like the Publicans, the Shopkeeper's excessive capitalist agenda and overzealous enforcement of her right to exclusive use of shop land are traits that get tiring quickly, and which regularly interfere with the activities of me, a goose, just trying to go about my totally normal daily activities. She does get some extra points however, for her calculated indifference to the suffering of the kid wandering around outside her stall due to his recurring goose troubles (more on those later), and for her penchant for profiting off the items I bring to her stall by making their "owners" spend money on them. Her support to the goose agenda may just be an unwitting side effect of her own personal awfulness, but at least it does sometimes work in my goosely favour. The Shopkeeper is also the villager most likely to actually be called Karen. 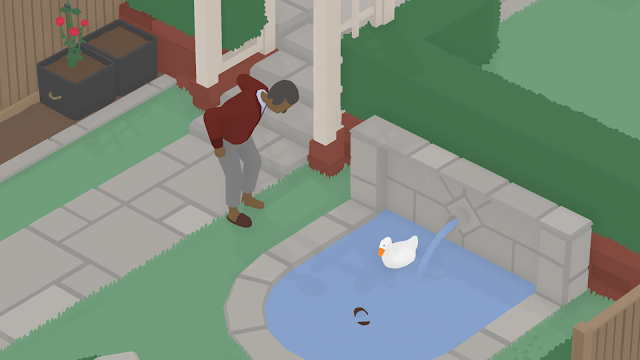 The Tidy Neighbour likes cricket, and tea, and his newspaper, and does not like having anything in his garden unless he has carefully curated it to match one of those three interests. Everything else - even the items which I might carefully present to try and further one of those interests, like a delightful lightly-used thermos - gets tossed over the fence without any regard for my effort in bringing it to him. Yes, sometimes this is useful, like when I want to fill up the house two doors down with garden implements and then watch them all get thrown out the front door in a giant wood-and-metal tangle. But often it hurts my delicate goose feelings. when I go to such great lengths to bring him delicacies from across the village which just get thoughtlessly wanged onto the messy neighbour's  patio. Other than this relentless thoughtlessness, there is not much to say about the tidy neighbour. He's boring. His pond is boring. His garden is boring. Yawn. Next. 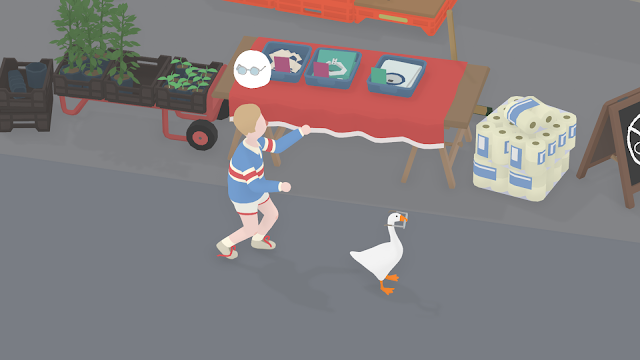 Is this the only child in the village? Is he reduced to weakly kicking around a football by himself on the tarmac because there's nobody else to play with him, or is there some super fun adventure playground in another part of the village that our poor weedy boy has been kicked out from? Either way, the Wimp presents the most sadistic avenues for goose mischief, which generally take the form of making him run into things, stealing his glasses and forcing him to follow the sound of pattering goose feet across the village in the vain hope of retrieving them, and untying his shoelaces then honking until he trips in a puddle. If the pub ladies are characters indicative of a deep, barely explored backstory to Goose Game's relationships, the Wimpy Kid is the character on whom the sequel potential clearly rests: an endlessly tormented child, falling for the same tricks ad nauseum, whose future disposition is inevitably going to be shaped by my actions in this game. Until he reaches that potential, however, wimpy kid must sit in the middle of these rankings.

As my sole interlocutor for the first part of the game, I feel a special affinity for the gardener and the rivalry we play out through our different conceptions of what his garden should look like. He thinks the trowel should live on the chair; I think it should live in the pond. He insists the carrots should go in the basket; I think they should live in the pond. He thinks the radio is best left on the cooler; I think... well, you get the idea. His willingness to chase me into said pond for some items and not others (like his special hat) makes me feel like there's a deep, thoughtful full of quirks here that in another game, I might consider getting to know better. If Goose Game were made by Bioware, the Gardener would be the default heterosexual female romance option, complete with a tragically dead previous flame, who I'd roll my eyes at and tell myself I wasn't going near but then accidentally get invested in on my first playthrough anyway. Tell me about your charming, safe feelings, Gardener! I promise they are not wasted on this, uh, goose! 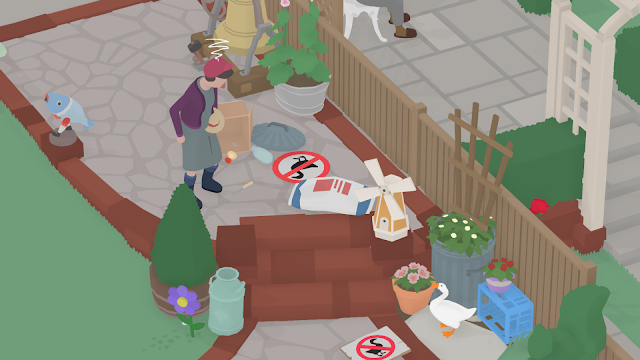 We come now, at the pinnacle of this ranking, to an uncomfortable truth: when we see the goose game for what it is, we must inevitably contend with the fact that, were we to be transported to its world, we would not identify with the agenda with the loathsome get awe-inspiring goose, but with the ordinary residents who rail, however ineffectively, against the transportation of their worldly possessions to a rubbish island near the village green. There comes a point at which we must search ourselves for some modicum of empathy towards these hidebound cretins, lest we fail to recognise the mirror they hold to our own selves. In doing so, it becomes clear who the unsung hero of the Goose Game's villagers truly is: the woman who has filled her garden with weird statues, entertaining windmills, a bath full of flowers that for some reason still has soap on it, and other non-conformist delights. Of course, what truly sets Messy apart from her peers is her subtle yet unmistakable assimilation into the Goose agenda. For one thing, she'll let me build a pile full of things her neighbour has thrown over the fence into her garden, and even dress up one of her statues in the detritus I bring her. She also shares my love of spying on her fellow villagers for maximum mischief, though her options are limited in this regard. Sealing the deal, and her place at the top of the list, is the giant garden bell. Never change, Messy Neighbour: the village resident we should all aspire to be.


POSTED BY: Adri is a semi-aquatic migratory mammal most often found in the UK. She has many opinions about SFF books, and is also partial to gaming, baking, interacting with dogs, and Asian-style karaoke. She is, as this post might suggest, better with animals than people. Find her on Twitter at @adrijjy.
Posted by Adri Joy at 12:00:00 AM