Strap in, Nerds: it's time for LESBIANS IN SPACE WHALES 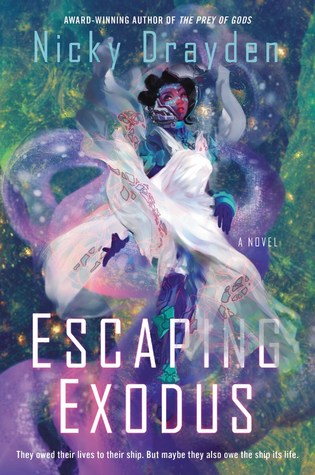 Nicky Drayden is a favourite of ours around these parts, given her track record of delivering wild and weird forays into science fiction and fantasy (often simultaneously). Now, in Escaping Exodus, we get a take on space opera that feels totally Nicky Drayden, while also being very different from both her previous novels. As you'd expect, its a novel of unexpected twists and sudden escalations, with some ridiculous-in-the-best way worldbuilding and characters who are far from blameless in the disasters unfolding around them. It's probably the only story you'll read this year which squeezes in both a stuffy, politically intricate coming-out ball and a plot-relevant episode of tasteful alien void sex (yes, there are tentacles) without ever making one or the other feel out of place. It is, in short, a trip. Expect no less.

Escaping Exodus follows Seske, a member of the ruling elite who is destined to take over the beast's matriarchal society, and her friend Adalla, a beastworker whose family perform the manual labour required to keep their spaceship running. And when I say spaceship, I mean "gigantic, ineffable space beast with enough room for a human-sized city inside its body", because that's what this society are building their home in. Its supposed to be a new model, after the death of their old beast: an apparently regular occurrence which requires the transportation of their homes and people, and the meticulous recreation of the city layout and structures they've build over centuries. However, things start going wrong more quickly than anticipated after the move, and Seske and Adalla find themselves taking different paths to the same realisation about how unsustainable and damaging their way of life has become - and how few options they have to genuinely change it. For Seske, this means trying to prove once and for all to her Matris that it is she, and not her Matris' very very taboo second daughter, who has what it takes to take over as leader and to find some appropriate spouses to go with it. For Adalla, living up to her Ama's expectations as a heartworker - one of the most prestigious but dangerous of tasks for a beastworker - would be challenge enough, without adding in the complication of a young, mute worker who inexplicably has her father's eyes. Seeking out a friendship with the Grisette leads to secrets about the Beast's maintenance which Adalla finds it impossible to overlook, and takes her into the less privileged side of Beastworker life.

Societally, Escaping Exodus offers a matriarchal and matrilineal system, upheld by the tradition of "motherlines" and a complex system of marriage that gives Ursula K. Le Guin's four-person Sedoretu a serious run for its money, and further divided between a ruling "Contour" class and everyone else. That a system in which marriage is between six women, three men and a single child would create an exponential decline on a cubic scale doesn't really get addressed, but it adds to the overall feeling of a decaying society trying to maintain some semblance of itself while potentially engineering its own downfall. (I should note that trans people exist in Escaping Exodus, but they are in a society that's prejudiced against men and highly fixated on appropriate social roles - so be warned for some blunt prejudice from characters when it comes up). Like a lot of stories that open on a world of alien injustices, one of the most constant niggles in Escaping Exodus' plot is the fact that both Seske and Adalla, despite being dissatisfied in different ways, are fundamentally ignorant of the exploitation that allows their society to function, but are very quick to get upset when it gets conveniently pointed out. To be fair, both have some pretty significant events to act as turning points, which staves off some of the worst of the character whiplash. There's also secondary characters like Doka, a match made during Seske's super fun coming out ball experience, who feel injustice in different ways again to Seske and Adalla and seek to rectify what seems most urgent to their own experiences, making the world of Escaping Exodus feel richer in the process.

For a lot of the book, its this richness of worldbuilding that proves the main draw of Escaping Exodus, with a plot that, despite its twists, doesn't have a lot of clear forward direction. Both Seske and Adalla vacilate between worrying about their own personal dilemmas and becoming preoccupied with the wider fate of the ship, and it takes about two thirds of the plot for both of them to stop effectively being sightseers and to start really stepping up as protagonists. In another book, that would be a complete dealbreaker, but the layers of worldbuilding and of societal exploration that Escaping Exodus heaps on reduced it to a minor issue. From the bioengineered weirdness that is the Beast ship, to the anthropological nuances of the human culture with its intricate hair braiding and complex marriage taboos, from the unexpected symbiotic relationships people form with the Beast's various gut denizens to details about how privacy and continuity become markers of privilege, there's There's just too much to take in, and after all despite their relatively privileged positions, it makes sense that these two young adults aren't immediately in control of the events around them, which after all have taken quite some time to get to the point of crisis they are now at.

Once that final third kicks in, however, things go from bad to worse to "I don't even know if this is going to work out or not but, hey, go for it" in quick succession. There's the release of huge amounts of new knowledge, of the ship's origins and current situation; there's trips out into space and back again using some pretty unconventional means, there's the whole alien sex thing mentioned above (I know you've been waiting to find out where that slots in, and... really, you just have to read it). It's at this point that things go from feeling weird but deliberate, to kind of messy, and its probably going to be up to the individual reader how much of that messiness is a feature and how much is a bug. As with Drayden's previous novel, Temper, its a bit disappointing to see a few satisfying plot strands disappear without trace, and there's glimpses of plotting that in different hands could have been an entire trilogy (but then, I said that last time). It also becomes a story that hinges on forgiveness, in all its unpredictable forms, and some plotlines and conflicts are dropped simply because one or both parties decide that it's no longer worth maintaining them. It leads up to a conclusion that feels about as satisfying as anything could, in the circumstances; this isn't a story that's been set up to have an easy answer, but it brings Seske and Adalla full circle to confronting their relationship to each other, and to the position of increased responsibility they now bear to the world, in all its goopy living weirdness, around them.

Escaping Exodus isn't a book that will work for everyone, but if you've found yourself enjoying previous works from Drayden, or wanting more space biopunk along the lines of Kameron Hurley's The Stars are Legion, or with feelings about Homestuck Act 6 that are still with you to this day, this is one to check out. On a personal level, I adored Escaping Exodus, and for all its odd choices and occasional unevenness it had me gripped from start to finish. Seske and Adalla's story is unlike anything I've ever read, and as an intricate look at a very different culture, it does everything it needs to be a roaring success.

Bonuses: +1 Intricate worldbuilding in the stomach of a giant tentacled space beast; +1 teenage protagonists who rise above their plot-mandated naivete to head up an interesting cast of characters

Penalties: -1 An accelerated, messy final third which is likely to disappoint those who want things neatly tied up