Sophia McDougall’s Romanitas, now available widely in the US for the first time, introduces readers to an alternate historical modern Roman Empire with just a touch of SFF. 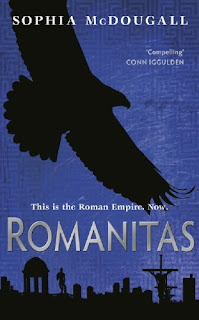 Marcus Novius Faustus has a problem. He’s the nephew of Gaius Novius Faustus Augustus, the Emperor of the Roman Empire in 2757 AUC (2004 AD in our terms). Uneasy lies the crown and uneasy lies the head of the young man who might well be the heir to the Emperor. Such a man is a target for the ambitious who might eventually seek to become Emperor themselves. Already, his father Leo, the former Heir, and his mother, Clodia, have recently died in a car crash. An accident, or something more?  And so after a unmistakable assassination attempt kills someone else by mistake, Marcus is on the run from whoever is hunting him and his branch of the family.. However, with air travel, magnetic trains, and more modern technology, is the Empire large enough to run away in?

Sulien and Una have a problem, too. Siblings in Britannia, they have been separated for years, as they have long since been sold into slavery. As bad as slavery is, Sulien has an additional issue. He has been caught with a free woman, accused of rape, and so has been sentenced to die by crucifixion. Even as his sister works to free him, that break for freedom is going to have serious consequences. And of course the Romans of all people understand the threat of slave revolts, even small ones. And so both Sulien and Una and thus put on the run...only to run into a certain member of the Imperial Family doing the same thing. But Marcus has a destination, a goal, a possible secret sanctuary for slaves on the run in the mountains of the Pyrenees.

Romanitas was the debut novel of Sophia McDougall, finally now in wide release in the United States.

The novel rises and is strong on the strength of the central characters. For all that this is a story of escapd slaves and an attempted assassination gone wrong, given a global Roman Empire and all that implies, this is a small scale novel with characters not going tremendous distances, and the novel itself feels tight and cloistered. That tightness of location and characters mean that we do get a deep dive into Marcus, Una and Sulien as people, as characters. There is a power dynamic in showing Marcus as vulnerable as escaped slaves Una and Sulien while being on the run. Arguably the second most important person of the Empire is laid as low as a pair of  escaped slaves, and McDougall masterfully contrasts and sets off the three characters. Although there is very good view of the interior of the Imperial Palace as the family, and others try to figure out what has happened to Marcus, and find him. But it is the bottom-of-the-pyramid more than the rarefied echelons of the Imperial Family that the novel truly sings and excels at. We get a really good sense of what desperate people trying to escape the eye of the Vigiles or the army trying to find them, and a society in general whose reaction to slaves on the run is extremely negative. I strongly enjoyed the sibling dynamic between Una and Sulien, as well as their relationship with Marcus. Other characters are strongly delineated as well, like the merchant  Delir and Makaria, Marcus’ cousin.  In the end, however, it is the trio of main characters where we spend most of the viewpoint in the book, and most of the strength of the character development.

There are very mild hints and aspects of the book that move it away from a strictly alternate historical text and more fully into the realm of SFF¹.  Both Sulien and Una have what can either be classified as psionics in an SF mode, or magical powers in a fantasy mode. Una has mental telepathic and mental influence powers in an Emma Frost mode. Sulien, on the other hand, has a preternatural ability to heal himself, and others. These powers are not overwhelming to the plot, but their us does drive character and it does drive decisions that influence the plot. This world does not seem to have these powers as common, or perhaps Una and Sulien are unique in their abilities.

My major criticism of the book is more of a preference and stylistic one more than anything else. This 21st century Roman Empire, even with the occasional neologistic word and reference thrown in, doesn’t feel as quite Roman as I imagined. There are flashes and hints here and there of a Roman world, but the Eternal Empire that McDougall creates here does feel, at turns, a little generic in its description and action. I wanted some more surviving  Roman-ness in her 21st Century Roman Empire.

Although the characters themselves don’t know it, I did appreciate that the author does explain the divergence at the end of the book in the appendices. While some alternate history novels do like to have characters wonder openly about the divergence point and muse what would have happened if things had gone another way (ie. to a world similar to our own), McDougall’s characters do not have the time to wonder what would have happened to make the Roman Empire go a different way, and eventually fall. I found the divergence point to be in a similar spot to Alan Smale’s Clash of Eagles. Those novels are set in what we would call the early 13th Century AD, and the conquering of North America is still in progress, whereas Romanitas is set in what we’d call the 21st Century, with a far more modern technology and viewpoint, and North America is long since settled (and split with Nionia, the Japanese).

The novel has two sequels, Rome Burning and Savage City, due for re-release in North America. This first novel does feel like the opening act to far more global events, bringing the more epic and world spanning events into play. So while the scale of this story is relatively small, I look forward to, now that the characters are established, how McDougall expands her narrative, scope and world in subsequent volumes.


¹This formulation is based on the premise that Alternate History without any other speculative elements is not fantasy or SF, but a subgenre of its own. Thus, Guns of the South, which has time travelers, is clearly SF, and Michael Livingston’s Shards of Heaven with magical artifacts, is fantasy, but Through Darkest Europe by Harry Turtledove, which has no other speculative elements other than the change in history, is less SFFnal.

Bonuses: +1 for a strongly delineated set of characters whose actions, character development and plot marry very well together. +1 Because Rome

Penalties: -1 for a bit of a pale and generic feel to that modern Roman Empire. It’s not quite as Roman as it *could* be.