Infinity's End is a fitting and excellent way to close the book on a solid anthology series. 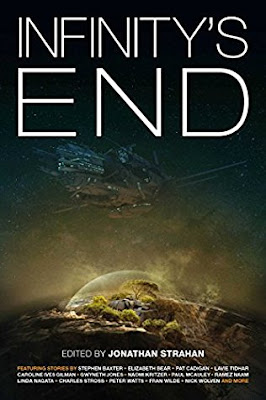 I asked the writers creating new stories for this book to try to open up the solar system, to look again at its vastness, its incredible scale, and at how humanity in different ways might fit successfully and happily into its nooks and crannies. - Jonathan Strahan, "Introduction"

One thing that helps to center my reading of one of Jonathan Strahan's Infinity anthologies is what he has to say in the introduction. I take the stories as they come and as they are, but that introduction discussing the central idea of the anthology and the intended perspective Strahan was looking to achieve is vital to how I view the overall success of the anthology.

As with previous volumes in Strahan's Infinity Project, Infinity's End is a fine anthology of science fictional short stories with a couple of standouts, one or two that just don't work for me for whatever reason, and the rest are just good stories that collectively build a solid anthology that may not be fully spectacular but still consistently enjoyable.

Before getting into the stuff that I liked, I'd like to quickly hit on the two stories that didn't work for me. Or, quite possibly, I didn't work for the stories. Lavie Tidhar is a renowned writer, critically acclaimed. I've come to realize that for not any particular flaw in the fiction or the writing of Lavie Tidhar, that I'm just not the right reader for Tidhar's work. I just so consistently bounce off of Tidhar's work that there's nothing really that "Talking to Ghosts at the Edge of the World" can do for me as a reader. It's an interesting thing, though, to come to the realization that I'm just not the audience rather than it's the story.

Likewise, "A Portrait of Salai" was not to my taste. Hannu Rajaneimi definitely stretches the idea of getting into the nooks and crannies of the universe - it's an odd story that talks about "earth like planets" and dyson spheres, but almost seems to be taking place on a super small scale (or, alternately, on a super large scale that dwarfs imagination. Honestly, I can't tell). There's a symphony built from throwing comets at a planet. "A Portrait of Salai" most effectively hits the scope of what Strahan is looking for while simultaneously not being one of the strongest stories in the anthology. Unlike with Lavie Tidhar, I'm not familiar with the work of Hannu Rajaneimi -  I'm aware of it and recognize the acclaim his novels have received, but I haven't read him before.

Much more positively, one of my favorite stories in Infinity's End is Seanan McGuire's "Swear Not by the Moon". It's the dual story of the rise of a woman named Wendy May, a woman so wealthy that she bought a moon with the goal of terraforming it into something habitable and a tourist attraction, along with the story of a family visiting Titan. The success of the story isn't so much the pushing forward of the "present" as it is the somewhat more didactic Wendy May sections. It's just so fascinating and scratched an itch that I didn't realize I had.

Other stories feature such oddities of a velociraptor investigating a murder (Justina Robson's "Foxy and Tiggs" and trust me, this is a futuristic story), one set so far in the future the solar system is being used for tourism and humans are so long lived they are functionally immortal - this one is the sort of story I used to love and now comes across as more travelogue than story ("Death's Door, by Alastair Reynolds). There's a Quiet War story from Paul McAuley. Generally, I appreciated and enjoyed most of the stories in this anthology.

From Kristine Kathryn Rusch I'd like more stories of Colette, a super smart kid solving problems before the authorities. I'm always happy to read anything from Stephen Baxter and "Last Small Step" does not disappoint.

"Intervention" from Kelly Robson is all heart. It features a woman who self exiled herself from her Lunar base home because of the Lunar prejudices against children and especially creche born and those who want to care for them. Jules dedicated her life to raising children, being a creche mother. Generation after generation. "Intervention" is a deeply moving, powerful, and personal story. As meaningful as the work Jules has done for decades has been, the resentment and borderline hatred she feels for Luna still seeps through at the barest mention of the moon. It's great and I highly recommend it.

My absolute favorite story from Infinity's End is Linda Nagata's "Longing for Earth". It is simply a beautiful story of Hitoshi, one of the oldest humans in the universe, taking his one thousandth journey, a trek on another artificial world. "Longing for Earth" is not a travelogue, per se, but it is a gentle and peaceful story of one man's hopes and dreams and the peace of travel and exploration. It's a beautiful story and is one of my favorite stories in this anthology. I appreciated the internal conflict between family who has chosen to upload themselves to a Virtual Layer with those family members who have stayed behind in "The Temporal Layer", which is what we might consider "the real world" - except that both existences are equally real, they're just different. "Longing for Earth" is a true standout and the highlight of an already strong anthology.

I'm sad that Infinity's End is the purported final volume in Jonathan Strahan's Infinity Project of anthologies. The theme has always been loose, no matter what Strahan has stated in the introduction (and I'm not sure he'd truly disagree with me here). He's just looking for science fiction which stretches the bounds of humanity living in the wider universe. The success is that Strahan has a great idea for good stories and each of the Infinity Project anthologies hits the mark for top notch stories. While I hope that Strahan will revisit the Infinity brand again several years from now (and if so, the anthology should maybe be titled Infinity's Rebirth), Infinity's End is a fitting and excellent way to close the book on a solid anthology series. Reading each volume and reading Infinity's End has been a delight.

Bonuses: +1 for the soaring heights of Linda Nagata's "Longing for Earth"

Penalties: -1 for the weirdness of "Kindred" (Peter Watts). You really need to know your Philip K. Dick to appreciate this one.