Temper soars precariously, like a skyscraper made of playing cards, presenting a fast paced -- if occasionally messy -- reading experience. 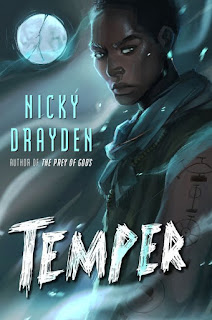 So, here's a problem that most prolific readers will recognise. I got a copy of Temper, the new book by Nicky Drayden, almost two months ago, and at least a month before the UK release date: an extremely exciting development which also let me cancel the second preorder I'd accidentally made in enough time to avoid getting it twice. Despite that excitement, however… two months have gone by without my reading it. How does this happen, dear readers? How are we not able to drop everything and find time for every "OHMIGODSOEXCITING" book that comes our way? Anyway, this delay was finally rectified this week, as Temper's time in front of my eyeballs finally came.

If you're familiar with Drayden's previous novel, The Prey of Gods, you might have some idea of what to expect in Temper, though this is a very different world in most respects. The worldbuilding is rich and largely cohesive, hanging primarily on the premise of a sort-of-South Africa where nearly everyone has a twin, and every pair of twins exchanges genetic material in the womb and then comes out with seven virtues and their corresponding vices divided between them. The twin with more virtues gets labelled the "greater" twin, while the one with fewer is "lesser", and destined for a lifetime of discrimination and low expectations. Twins balance each other out when in proximity and suffer physical and mental effects if they stray too far away from each other, with much of the resulting urban environment addressing the problem of how to split off "greater" and "lesser" twins while still maintaining that proximity link.

Into this world come Auben and Kasim, born in the "comfy", a slum area separated from surrounding suburbs by a giant C-shaped wall. The pair are unusual in that Kasim has come out with six out of seven virtues - only missing charity - and Auben has six vices (including, obviously, Temper). Despite being literally branded as having an inferior personality, narrator Auben is smart, personable and driven, and the brothers have managed to maintain a strong relationship despite the inherent inequality in privilege. Less promisingly, Auben has also started hearing a voice in his head compelling him to evil, and its up to him and his brother to try and figure out what to do about this apparent demonic possession, learning more about the dominant religion of their society, which they have been raised outside of, as they go.

What follows is a story that will have you reaching for the Ron Burgundy memes, as Auben and Kasim go from awkward teenage antics with their respective crushes to the world-altering centre of a long-running supernatural conspiracy. To say more would be to do a disservice to readers who want to experience Temper in its absurd, glorious entirety, but I'll just say that the last quarter of the book, in particular, did not go at all where I thought it would. Even Auben, towards the end, notes that particular things he was worrying about at the start of the book seem trivial from his later vantage. That said, in hindsight, every escalation of Temper's plot and stakes has a logical progression to it, and the story itself is very easy to follow. The book becomes a richer experience for its unpredictability and Drayden's willingness to push her premise to its absolute limit.

That's not to say that I agreed with everything that happened here. In particular, there's a lot of violent action by our protagonists - including something one scene it's hard not to interpret as sexual assault and another that is basically rape with an incest/mistaken identity element (not explicitly described) - which the narrative glosses over and really doesn't make the boys answer for. It's notable that the one functional, continuous intergenerational relationship is between the boys and their uncle, who is coping with his own mental health issues and some serious internalised baggage around sex. While Kasim and Auben interact with plenty of women, sympathetic and otherwise, on their journey, it would have been nice to see them called out for their misogyny when dealing with some of them, especially when love interests start to arise. I'd also have liked to see more acknowledgement of how societal misogyny and dynamics would play out in a world where half the population are functionally intersex: different-sexed fraternal twins whose genetic sharing in the womb makes them "gender chimeras" or "kigen". These characters mainly use "ey/em/eir" pronouns and form most, though not all, of the queer representation in Temper. Based on the acknowledgements, it looks like a fair bit of sensitivity reading went into getting this right, and while it isn't my place to say the extent to which it's successful (individual readers will no doubt draw their own conclusions), I didn't notice anything that made me feel it wasn't well handled.

I also think Temper could be a technically tighter experience without losing its unpredictable charms. For example, there are a fair few story threads where lack of back story means that reveals seem to come from nowhere: like Auben and Kasim's mother, or Nkosazana and Ruda, or the entire secular movement. Other plot points, like the reveal of Auden and Kasim's father, don't seem to add anything to where the story ends up going, and could have been dropped without losing anything from the overall story direction. I could easily see the basic story covered in Temper turning into a trilogy in another author's hands, with subplots galore and a slower escalation to the eventual end state (which would fit quite nicely into three volumes, structurally speaking). That Drayden handles the story in one turns this book into wild ride it is, and it works brilliantly as a standalone, but I'm definitely going to be looking out for longer volumes and potential series from her, as I think she could develop a longer story to great effect.

I normally describe The Prey of Gods as "a hot mess in the best possible sense", and Temper feels like a natural progression from that: a more focused story which instead channels its energy into a plot that soars precariously, like a skyscraper made out of playing cards holding up despite gravity saying otherwise. I came away from Temper entertained, impressed and more than a little confused, and I'd recommend it to anyone who likes their high tech fantasy with a heavy dose of inventive unpredictability. Just remember to make the time to actually read it!

Bonuses: +1 A fast-paced plot that never quite goes where you expect, but makes great sense anyway

Penalties: -1 Teenage boys still get away with too much; -1 A few too many stray story threads