This Saturday marks the return of Halloween ComicFest!  Participating stores will be giving out free comics and typically have other fun activities that are delightfully bewitching. In addition to the comics, stores will also have some exclusive collectibles for sale. 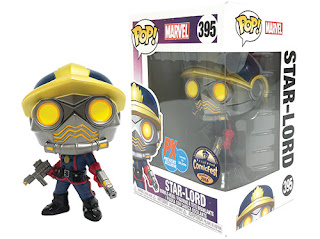 The item on the top of my list is the Funko Pop! of Star-Lord.  This look is based on the Guardians of the Galaxy comic from Dan Abnett and Andy Lanning.  In addition to the Pop!, stores will have limited numbers of exclusive Deadpool merchandise, including a lovely version of the Merc with the Mouth dressed in a lovely pink dress.  Check out all of the exclusives here.  In keeping with my annual tradition here at Nerds of a Feather, my top five comics are the following.  In no particular order.

Johnny Boo and the Spooky Tree - Written and illustrated by James Kochalka, Johnny Boo stories are a favorite in my house. The series features a ghost named Johnny Boo and his pet ghost Squiggle. The two interact with a colorful cast of characters and this book is the first chapter in an upcoming spooky story that I hope involves the Ice Cream Monster. I preordered three bundles of this book to pass out to trick-or-treaters and it already has rave reviews from my children.

Goosebumps: Monsters at Midnight - Based in the monstrous world created by R.L. Stine, this comic is penned by Jenny Lambert and illustrated by Chris Fenoglio.  One of the highlights each Halloween season is reading spooky stories and Goosebumps is synonymous with age appropriate horror. This full-size comic features a pair of children who find themselves in an upside down world after exploring a local library. It appears to feature Slappy the Dummy and that is more than enough reason to pick this title up.

Ms. Marvel #1 - If you haven't checked out this series from G. Willow Wilson and Adrian Alphona now is the perfect time to get the debut issue for free! This story introduces some much needed diversity into the world of mainstream comics and Kamala Khan is a welcome change to the typical superhero. Find out why it is exciting to have Marvel's first Muslim character with her own book!

Jughead: The Hunger - Geared towards older readers, this spooky book is set in the Riverdale universe. It has been oddly satisfying to watch Archie re-brand itself as Riverdale geared towards teenagers. While I have not gone down that rabbit hole, I am very intrigued to read a book featuring Jughead as a werewolf and Betty as a werewolf hunter. From talking to friends who have enjoyed this reboot it sounds like this title doesn't take itself too seriously and has its tongue firmly planted in its cheek.

Over the Garden Wall and Into the Unknown - It has been delightful to see this quirky cartoon get an extended life in the form of a comic book. While the brothers Wirt and Greg have returned home from The Unknown, someone else has accompanied them on their journey.  Now they need to find a way to get their friend back to the Unknown.  Flipping the script and allowing for a stranger to interact in our world should be an interesting twist that is recommended to readers of all ages.

Check out the entire library of comics that might be given away at your local comic book store by clicking here.  Make sure you keep in mind that some stores may not have all of the titles and some may give away more comics than others. The idea is to have fun and pick up at least one free book. It wouldn't hurt to pick something else out as well as the stores purchase all of the books that we get to enjoy for this event for free.  Happy Halloween!