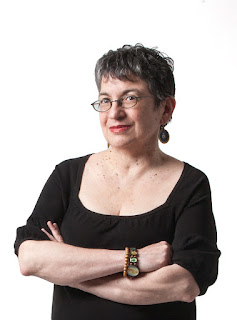 SABRINA VOURVOULIAS is an award-winning Latina news editor, writer and digital storyteller. Her news stories have been published at The Guardian US, Philly.com, PRI.org, NBC10/Telemundo62, Philadelphia Weekly, Philadelphia Magazine, and City and State PA, among others. Her journalism has garnered Edward R. Murrow, José Martí, Keystone, Pen & Pencil Club, and New York Press Association awards. Her short fiction has been published by Tor.com, Strange Horizons and Uncanny, GUD, and Crossed Genres magazines, as well as in multiple anthologies, including the upcoming Kaiju Rising II, Sweet and Sugar Tooth, and Sunspot Jungle.

Confession: I haven't read Lovecraft before, but after reading and loving the Victor LaValle and Ruthanna Emrys novellas that recast and subverted Lovecraft stories, I decided to bite the bullet. My daughter had a copy of The Call of Cthulhu and Other Weird Stories by H.P. Lovecraft (edited by S. T. Joshi) on hand, so I started. Another confession: Even biting the bullet, I don't know how far I'll get.

Exile by Lisa Bradley. I've long admired Lisa's poetry and short stories — hers is a distinctive and sharp Latinx voice and I just can't get enough of it — so I'm really looking forward to her novel. I'm also looking forward to Teresa Frohock's Where Oblivion Lives, the next installment in her Los Nefilim series set in 1930s Spain. I'm a sucker for historical dark fantasy with magical or paranormal resistance at its heart, and Frohock does that uniquely and excellently.

Kiini Ibura Salaam is one of the finest stylists in speculative fiction and her book of stories, When the World Wounds, is quite spectacular. I'm really haunted by two of the stories in the book, "Because of the Bone Man" and "Hemmie's Calenture," and think I might need to reread them as a master class in how art can confront our deepest societal wounds.

When I watched the first season of the TV version of American Gods I found I actually couldn't remember much of the novel, which I had read when it was first published. But I did remember I had liked it, so I went back to reread it. I was less enamored the second time around. I realized that the characters were far more compelling and engaging on screen than on the page, and the most memorable moments (Vulcan's gun-toting and gun-loving "Make America Great Again" town, for example) were TV moments, not book moments. Plus, I don't know what "America" Neil Gaiman was touring when he wrote the book, but there is no American U.S. — much less the Americas — without Latinxs in it. Maybe I was a more forgiving reader back when I first encountered the book, but I don't have time for that sort of exclusionary worldbuilding these days.

No one book, but I started reading poetry young, and poetry from Spanish Golden Age Epics to Warsan Shire continues to be the deepest influence on my work. Cadence is everything, even in prose, and I write out loud...

My latest book is the new edition of my novel, Ink, from Rosarium Publishing. A near-future immigration dystopia originally released in 2012, Ink opens when a National Identity bill becomes law in the US, marking immigrants and children of immigrants with biometric tattoos and tracking chips. The novel explores how ordinary folks, both "inked" and not-inked, sidestep and resist the ensuing, and escalating, repression. Ultimately, the novel celebrates the power of resilience, ingenuity and community. In the years since it was first published, my imagined dystopia has become increasingly relevant, and I'm really grateful to Rosarium for its commitment to reissuing it at this exact moment — when anti-immigrant and anti-Latinx rhetoric has reached fever pitch. Rereleases aren't usually money-makers for small presses (or even large presses), so I think the reissue is a act of resistance in and of itself. And what a lovely act of resistance it is! This edition of Ink is beautifully laid out, has a gorgeous new cover by South African artist Vincent Sammy, and includes a thoughtful new introduction by renowned Latina writer, Kathleen Alcalá. Author and physicist Vandana Singh has called this both "a page-turner" and "a book for our times" — so how much more awesome can you get?