Microreview [book]: The Beautiful Ones, by Silvia Moreno-Garcia

A novel of manners where the pursuit of wealth and privilege will drive people to true darkness. 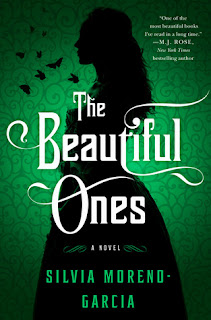 When I read Mary Robinette Kowal's debut novel Shades of Milk and Honey some eight years ago, the elevator pitch of "Jane Austen with magic" would have had me run (not walk) from the novel if I didn't trust Kowal's writing from her short fiction. Despite my background in English literature, the concept wasn't a selling point. Kowal's novel was excellent and I've since read and enjoyed a number of novels that live in the intersection of manners and the supernatural. Gail Carriger very much comes to mind, for one.

Silvia Moreno-Garcia's two previous novels have each been very different from each other, and if you throw in her 2017 novella Prime Meridian, there is no common theme to her fiction except that she has set her fiction in Mexico City. Having previous written an urban fantasy novel based around nostalgia and music and her own take on a vampire novel, Moreno-Garcia takes on a novel of manners and yes, it has magic.

The core of The Beautiful Ones is the inadvertent love story between Hector Auvray, a stage magician who happens to have a bit of telekenesis, and Nina Beaulieu, a somewhat uncultured heiress who also just happens to have a touch of the telekenesis. Hector is noticeably older than Nina, but she is smitten and he agrees to woo her in part because he realized her aunt is his one true love who left him and married another man when he was off making his fortune.

This is a story of society, of being proper, genteel, of being respectable, and of having a family name that matters. There is magic, but it more helps provide shading and flavor to the novel. It shows how Hector and Nina are different from their families and society and how alike they are to each other.

I know this is an aspect of these novels of manners, but Hector's reticence in sharing any bit of his inner thoughts or emotions is really damned frustrating. He's so proper and reserved. Early in the novel this is because he's not truly romantically pursuing Nina, but there's an inevitability to that relationship and despite the hurdles, we just want them to actually get to properly falling in love and settling their problems.

The Beautiful Ones is a lovely novel. There is a gentleness that is wrapped around true steel and nastiness. Wealth and position are more important than love, but the pursuit of those pretty things will drive people to true darkness. Silvia Moreno-Garcia gets all of that, and wraps it in the proper trappings of a novel of manners.

Bonuses: +1 because Moreno-Garcia so perfectly nails the Austen-esque feel of the era while writing a novel that is just a smooth to a modern reader.

Penalties: -1 for the frustration of Hector's reticence.

Nerd Co-efficient: 8/10 "well worth your time and attention."  See more about our scoring system here.