A collection of varied stories that continue the story and the themes of Frankenstein to great effect. 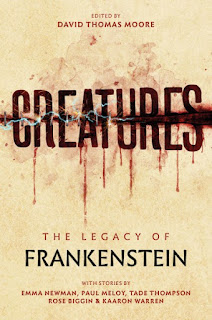 Joining Vance in his celebration of Frankenstein at 200 this month, I'm looking today at a timely volume from Abaddon books, which explores the mythology two centuries on through a new set of stories edited by David Thomas Moore. Creatures: The Legacy of Frankenstein is a collection of five long novelettes and/or short novellas exploring the legacy of Victor Frankenstein and his creation through a series of shared universe stories, dealing with other creators in other situations, all of which circle the same themes of life, death, autonomy and monstrosity that the original text evokes so effectively.

For me, Creatures draws on some foundational English Literature experiences, as Frankenstein basically bookended my secondary school career. I didn't read the novel itself until my final year, as part of a term paper on Gothic fiction which pretty much my late teen aesthetic (Rebecca-from-Jane-Eyre meets a less experimental version of The Rules of Attraction, I guess), but I have stronger memories of performing parts of a dramatised version in first year. At the time, I was tall, awkward, and had just moved back to the UK from Australia with a deeply uncool hybrid accent. I'd also just started getting periods, and I have strong impressions of trying to work with classmates on this strange, tragic story while feeling crampy and sticky and wrong, as if my entire body was about to give itself away and condemn me to eternal embarrassment on top of all its other betrayals. That I associate this feeling -- which I assume was happening just as much during Maths and Science and History and all the other highlights of the English Year 7 curriculum -- with Frankenstein specifically is, I think, an indicator of how resonant the myth is even when filtered through age-appropriate dramatisations. I've never quite gotten over the tragedy of the creature, perhaps because at the time I encountered it, the feeling of wrongness felt all too real.

The stories in this volume proceed in chronological order, from the mid 19th century to a contemporary tale, and I believe that all five also feature the original creature somewhere in the story, although only in Tade Thompson's "Kaseem's Way" does he get to speak to the audience directly. The story alternates between the first person, epistolary narrative of the creature and the perspective of Kaseem, a Black boy from London who ends up becoming the ward of a scientist named Gull. Twelve years after meeting Gull, Kaseem is now deep into illegal scientific practices alongside Radha, another young scientist, when Gull's discovery of Victor Frankenstein's original notes leads to a replication of that experiment, drawing the attention of the creature and the authorities down on the pair. By placing Frankenstein's work into the hands of two young people of colour in 19th century London, Thompson's opening story immediately sets the myth in a more diverse context, playing on the power structures inherent in both the science fiction conceit and the real-world societies of the time to great effect. Neither Kaseem nor the creature ultimately come out well in this story, but the end has a fitting amount of rage to see them both off in style.

"The New Woman", by Rose Biggin, is a decadent, queer, female-driven story set in the last days of the 19th century, in a "bohemian assemblage" centred around Mrs Stella Moore. Into this company of artists has been brought a medical student, Christine Sparks, who has been experimenting on embalming corpses in formaldehyde, and her description of her work captures the imagination of another artist, Fran, who has been "sculpting" with dead creatures (think taxidermy, but with more glitter). It quickly transpires that Christine and Fran already know each other quite well, and that the next stage in their relationship will be a joint project to create a work of living art out of a corpse. Their creation, Eve, ends up being realised and impacting their relationship in ways that neither predicted. Of all the "creatures" in this volume, Eve ends up being the most well realised, and her journey from "living artwork" to a fully realised person, cognisant of the limitations of her state, is compelling and tragic. Unfortunately, that tragedy also ends up punishing its queer characters in favour of heteronormativity, which I can't quite forgive it for.

Of all the tales here, I felt Paul Meloy's "Reculver" had the least to bring in a speculative sense, although it deals interestingly with disability and wartime experience, drawing parallels between the myths that built up around those who fought, and the parallel mythology of those who, for whatever reason, didn't. Of all the stories, it leans most heavily on the motif of the outsider: its teenage protagonist, who had polio as a child and has been left with a bad leg, feels he does not fit in to his small seaside town, but it's not clear who among the remainder of the cast does. The protagonist's obsession with childhood crush Ann Bennett and the man she begins a relationship with, Geoffrey Dodd, forms a large part of the plot, as does the reaction of Ann's "shellshocked", violent father. Told in an almost slipstream style, with lots of odd dream sequences and narrative skips, the direct appearance of the Frankenstein myth in "Reculver" ends up feeling more minor than any of the other stories, and it was less successful with me as a result, although as a standalone it would still be a strong experience.

Emma Newman brings what, on the surface, feels like a classic Ashes to Ashes style period police procedural in "Made Monstrous", with a detective and his assistant dealing with a series of "mysterious" corpse thefts whose basic purpose won't come as a supririse to a reader coming to this story as part of a Frankenstein collection. However, as the title indicates, this is a story that plays particularly heavily on the "who is the monster" element of Frankenstein and there's an interesting subversion of Victor's original intent in how the mystery plays out. Detective McGregor is a compelling lead in all of this, and I have to note that this is the second time, after Carlos Moreno of After Atlas, that Newman has made me root strongly for a gruff male detective who represents the system but has also been deeply, irreversibly wounded by it. WPC Hannerty, despite a deeply unpromising introduction through McGregor's casual chauvinist lens, ends up being a great addition too, and the relationship between the two leads is one of the best parts of the story. Emma Newman's involvement in this collection was a major factor in my picking it up and I was far from disappointed with her contribution here.

And then there's "Love Thee Better", by Kaaron Warren. This story, frankly, terrified the hell out of me. Protagonist Nina, and her partner Declan, are gifted paid berths on a mysterious medically-inclined cruise ship run by her father's family friend, after an accident leaves accident at the building site he works on which ends up completely removing his arm. It quickly becomes clear that the main passengers are either waiting for limb donations or want to be donors; this is only the tip of the weird iceberg and there's very little hope of Declan or Nina getting out untouched. Worse, there's a sense of claustrophobia and fatalism among all of the passengers, Nina included - while there are hints that not everybody is on board with the captain's agenda, nobody does anything to stop themselves from falling prey to it. I find stories which feature utter complacency in the face of horror far more terrifying than reading a story where people are struggling against their fate, and the timelessness and lack of escape that the cruise setting brings only makes this worse. Of course, this is a Frankenstein story, so limb transplants are not the whole story, and the way the introduction of artificial life takes place here is just part of the tense, relentless escalation. I think this was an excellent story, but I felt sick for about an hour after finishing it, so there's no way I'm going back to check.

Put together, this is a very strong collection: what the stories as a whole lack in inter-relatedness and consistency, they make up for in terms of the sheer breadth of the Frankenstein experience that they cover between them. There's no simple moralities here, no clear answer to questions about scientific progress, life and death, revenge and forgiveness, or the condition of otherness which the original story deals with so successfully. Equally, with the possible exception of "Kaseem's Way", these are all stories that I think would work even for readers unfamiliar with the original: each stands alone, narratively speaking, and these are universal themes. Whether or not you're a fan of Shelley's 200-year-old masterpiece, Creatures is a worthy, varied anthology.

"Kaseem's Way" by Tade Thompson: 8/10 - smart and socially aware, with a strong sense of continuity from the original novel.

"The New Woman" by Rose Biggin: 7/10 - lush, unsettling queer aesthetic let down by the ending.

"Reculver" by Paul Meloy: 6/10 - effective as an exploration of otherness and belonging, not so much as a work of speculative fiction

"Made Monstrous" by Emma Newman: 8/10 - feels straightforward on the surface but has powerful hidden depths

"Love Thee Better" by Kaaron Warren: 7/10 - creepy as hell, which I guess is a good thing here?

Bonus: +0.8 covers a wide range of thematic areas without detracting from the coherent whole.