This is a warning that we are less than 10 days away from Halloween ComicFest!  I preordered three packs of the Johnny Boo comic to pass out on Halloween and am looking forward to swinging by my local comic book store to pick up some other books. To find a participating store near you click here. 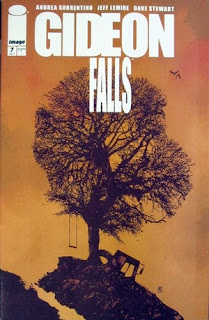 Pick of the Week:
Gideon Falls #7 - After the cliff hanger at the end of this issue I am not sure I am going to be able to wait for the next issue! Norton is so close to opening the door of the Black Barn, but I am not sure that it is a good idea. Jeff Lemire and Andrea Sorrentino have done a masterful job weaving together multiple mysteries that are all centered in Gideon Falls. In addition to Norton's story, there is the issue surrounding Father Fred and the juxtaposition of the mystery deep in the city of Gideon Falls and the one in the country is truly jarring. This is definitely one of the creepiest books I have read recently and it is a perfect book to pick up during the Halloween season.

The Rest:
Shuri #1 - As someone who has not read many Black Panther comics, it is nice to learn more about Shuri. I was unaware that she spent some time as the Black Panther and of the spiritual journey that she recently embarked on granting her additional powers. In this debut issue, T'Challa is sent through a wormhole into space and has been missing for nearly two weeks. While Shuri tests her latest inventions, she interacts with a mysterious individual who has hacked her computer and a council of female leaders plan on her taking on the role of Black Panther once again. It was great to see snippets of her childhood and I am very excited to learn more about Shuri and Wakanda following this captivating first issue.

Daredevil #609 - If you are looking for a jumping on point for Charles Soule's Daredevil now seems like a good time. In another death of a superhero arc, Matt Murdock opens up this issue by getting hit by a truck and sent to the ER.  I am curious what is going to happen with the death of Daredevil, but this issue sets the scene for the new arc.  Daredevil and his team are declaring war on Kingpin and his rigged election, but that takes trust. The kind of trust that includes Murdock letting the cat back out of the bag and informing more people about his superhero alter ego.  Curious where Soule is going with this one and who the mysterious person was throwing bone knives at Daredevil. I'm on board for this one.