Frankenstein at 200: Society Be Damned

This was a challenge. I don't know exactly what Universal owns and doesn't own either, but certainly Mary Shelley's book has long since entered the public domain and filmmakers have experimented widely with adapting and re-working the story. Take, for instance, the long but partial list of film and stage adaptations over at Wikipedia. But I was given the task of subbing out Victor Frankenstein and his creation for...anything different.

Here's the thing about that: Mary Shelley's vision has become so utterly foundational in our shared sense of the fantastic that I didn't see a path forward except by looking back further than 1818, the year Shelley published her novel. How could I conjure a mythology that didn't set an audience on the defensive immediately with thoughts of, "They're just ripping off Frankenstein"? So I went backward, and looked at the idea of a golem made from mud or clay, and either an alchemist or rabbi having created it. These legends predate Shelley by sometimes hundreds of years, but the themes of many of these stories run in close parallel to those Shelley explored in Frankenstein.

It was not a perfect solution, and the movie never got made. If I ever revisit that project, though, you can bet I'm switching dude back to Frankenstein's monster, because I didn't fall in love with science fiction and horror because of Kabbalistic stories of mud men. I fell in love with those genres because of Mary Shelley's creation.

I cannot know what Mary Shelley was thinking or feeling when she wrote Frankenstein, or the Modern Prometheus, but my aim here is not to present a scholarly, comparative lit exploration of her book, now celebrating its 200th birthday. But this seemed like a great opportunity to revisit the book, which I hadn't read in a decade and a half, and celebrate what about it still speaks to me today. 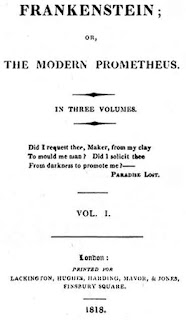 If we think about Frankenstein as a classic tragedy, then clearly Victor Frankenstein is the tragic hero, but what would be his tragic flaw? The facile answer is "attempting to play God," but I don't think the text fully supports that. It's not his playing God that dooms him and his family, it's his abdication of responsibility. After he forges his creature from unknown materials, he has lots of opportunities to head off the tragic outcome that ultimately befalls him, but he always chooses a different way. So it might be abdication, a refusal to take responsibility for his actions, or it could simply be idleness. As the privileged son of a wealthy syndic, Victor Frankenstein never knew want or need, and simply did things as his whim took him. He went to university just because. He made a creature from cast-off bits and gave it life just because. He went back home and married his cousin just because. I am perhaps being uncharitable, but the point is that nothing much seemed of great import to Victor except his current idea of how to pass the time. This is a criticism, I feel, that Mary Shelley would have had with all of those who, like Victor, made up the upper strata of society at the end of the 18th century. And, possibly, with her husband Percy Shelley, upon whom she probably based much of Victor's personality and circumstances.

I am reminded of F. Scott Fitzgerald's final assessment of Tom and Daisy Buchanan in The Great Gatsby, where narrator Nick Carraway says of them:


I couldn't forgive him or like him, but I saw that what he had done was, to him, entirely justified. It was all very careless and confused. They were careless people, Tom and Daisy – they smashed up things and creatures and then retreated back into their money or their vast carelessness, or whatever it was that kept them together and let other people clean up the mess they had made.

By the time 19-year-old Mary Shelley attended the fabled summer getaway on Lake Geneva with Percy Shelley and Lord Byron — in the bizarre, inexplicably hostile summer of 1816 that had many across the globe fearing the end of the world — in which she came up with the idea for Frankenstein, she had already given birth twice. Her and Percy's first child had died after being born premature, and after the birth, Percy had left Mary and run off with another woman for a brief affair. I have to wonder how much Percy Shelley's abdication of responsibility toward his and Mary's sick child informed Victor's abdication of responsibility toward his "offspring." I have to believe it did influence Mary's depiction of, if not Shelley, those situated like him. How could it not?

In my reading, I see the creature as a sympathetic figure, and an innocent. His crimes — and he racks up a pretty healthy string of murders — are the culmination of a long, brutal lesson taught him over and over again by the human beings he encounters. I'm ascribing my own feelings regarding the creature to Mary Shelley's design, and I fully realize that my interpretation may not match her intent. But there are a couple of events that take place during the creature's long sojourn in the outbuilding behind the De Lacey cabin that I find fascinating. The first is the story of how De Lacey (the blind old man) and his two children came to live in that desolate cabin, and the other is the related story of Safie, Felix De Lacey's fiancee, who arrives unexpectedly.

As I discussed in the previous post, in Shelley's original construction, the creature hides away for months in this outbuilding, and learns not only language by watching the De Lacey family, but also history and poetry, including Milton's Paradise Lost, from which the book's epigraph comes ("Did I request thee, Maker, from my clay / To mould Me man? Did I solicit thee / From darkness to promote me?"). The creature believes the De Laceys to be the most gentle and admirable of all people — and truth be told, they may well be, which makes what Felix De Lacey does later doubly horrifying — and his opinion is reinforced when the reader learns the story of Safie, Felix's fiancee, which also reveals why the De Laceys live in such dire material circumstances.

The De Laceys, late of wealthy Parisian society, were acquainted with a certain Turkish merchant who was arrested, it is implied, wrongly. Out of an abundance of character and virtue, the De Laceys conspire to release the Turk from prison and secret him to safety. This is admirable stuff (the Creature is listening)! The Turk is so grateful, he promises his daughter Safie to Felix for a bride (and they love each other, so this is all a win-win). But the duplicitous Turk is lying, and actually intends to take Safie away with him after the De Laceys spring him from the hoosegow. Again, the Creature is listening. Self-sacrifice is met with duplicity. But eventually, after the De Laceys effect the Turkish merchant's escape from prison and safe passage from Paris, and after Safie is denied her return to Felix...after the De Laceys are found out and banished from France to a remote hovel in Germany, after all that, Safie shows up to be with her true love, Felix. So...true love wins? In the face of society? Maybe?

Here we leave the parameters of the De Lacey story and get into Safie's personal story. Here Mary Shelley does something that had to be uncommon in fiction from 1818, in that she gives a female character agency. Safie discovered her father's plans for her, and discourses at some length about the decision that she made not to return to her Turkish origins, which would have severely proscribed the type of life and agency she might possibly realize. It was hard for me, as a modern reader, to separate Safie's feelings about female agency from those of Mary Shelley. In Safie's story, we get possibly the clearest and most concise argument for women's equality to be found in the book. Though Safie's criticisms are couched in terms of religion ("the Arabs won't let women do...xyz..."), it's no stretch to see that the lives of European women in Shelley's time were almost as narrowly defined. If Mary Shelley stakes out a position on women's equality, in the tradition of her mother Mary Wollstonecraft, in Frankenstein it is through the micro-drama of Safie. It may or may not be stretching things to say that the Creature, when presented with the idea of fully human women being treated as "lesser than," saw in the struggle for women's equality the passion of his own heart.

This leads us to the sad resolution of the Creature's time as a silent observer of the De Lacey home. He has closely watched a family that treats the elderly/women/foreigners with dignity and respect. They are, no doubt, aberrant, as they might be in some circles today, but in the most admirable of ways. Yet, when he, with his monstrous appearance and proportion, presents himself to them, he is literally beaten, driven from the house, and the house is found so contaminated by his presence that the inhabitants never return. 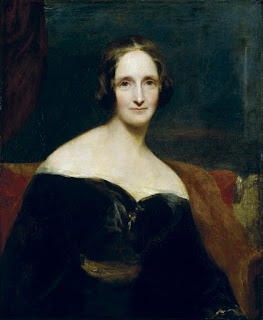 So in the end, what is Mary Shelley saying about humankind? Nothing good, it would seem. Not only are those who are illegitimately lauded for their basic human competence (Victor Frankenstein) incapable of taking responsibility for their own foul-ups, but the most generous and magnanimous of people (the De Laceys) will violently reject those who are different from themselves. Regardless of circumstance, the status quo demands adherence. And people like the "Creature," or others who are similarly misunderstood, stand little chance of acceptance, regardless of the content of their character.

It is hard to argue with Mary Shelley, even today, that the comfortable, born-well-off individual can not simply do whatever he wants without consequence. Perhaps it is this enduring dynamic that makes the murderous Creature so relateable. Despite the characters in the book speaking in such hyperbolic praise of individuals who fundamentally reject taking responsibility for their own actions, there is, it seems, an implied subtext that resonates to this day — 200 years later — suggesting that those on the outside of this privilege, looking in, are forever playing a rigged game.

Posted by Vance K — cult film reviewer and co-editor of nerds of a feather, flock together since 2012, Emmy-winning producer, writer of two songs about Frankenstein, and author of at least one unproduced script inspired by it.
Posted by vkotrla at 12:00:00 AM