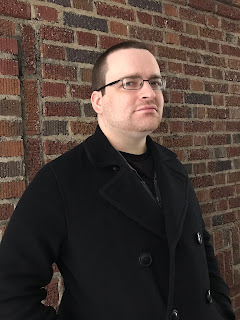 Seth Dickinson's short fiction has appeared in Analog, Asimov's, Clarkesworld, Lightspeed, Strange Horizons, Beneath Ceaseless Skies, among others. He is an instructor at the Alpha Workshop for Young Writers, winner of the 2011 Dell Magazines Award, and a lapsed student of social neuroscience. He lives in Brooklyn, New York. The Traitor Baru Cormorant was his debut novel. You can find him on Twitter as @SethJDickinson.

Before bed I'm verrrrrrry slowly working my way through The Power Broker, which is the story of Robert Moses, the man who built modern New York. He began as an idealistic reformer, but constant obstructions drove him to seek power by any means, until that desire consumed him! It's extremely on brand. (He was a really bad person).

I'm also reading Strange Practice by Vivian Shaw, which is about a doctor whose practice treats the supernatural population of London, and Eternity by Greg Bear, which is the sequel to a childhood favorite book about the discovery of an asteroid whose interior goes on forever.

I just finished Jade City by Fonda Lee, Ship of Fools/Unto Leviathan by Richard Paul Russo, and The Freeze-Frame Revolution by Peter Watts.

The Mirror and the Light by Hilary Mantel, the last in the Wolf Hall trilogy about Thomas Cromwell. All that's left is his downfall and execution! If you enjoy epic fantasy you should read these books; they are beautiful, intricate thrillers about a common man tasked by the King to find a way out of his (the King's) marriage.

I do a lot of re-reading, so the itch usually gets scratched pretty fast. I recently went on a World War III kick — Red Storm Rising, Fire Lance, Team Yankee, Red Army, Eon, and Ghost Fleet.

I think I would like to reread Code Name Verity by Elizabeth Wein, a YA novel about a young British spy imprisoned in Nazi-occupied France. After four years or so I'm probably ready to endure the pain.

Oh! And I want to do a reread of the viral 9mother9horse9eyes...thing, the 'flesh interfaces' meta-fuckery story that some genius improvised on the Internet in 2016.

Guns, Germs, and Steel. When I read it in high school I thought it was the smartest thing ever written. Now it's pretty obviously reductionist. (I'm not, like, clever for figuring this out, there's a bot on the history reddit whose only job is to post disclaimers about GG&S.)

I used to think Pale Fire was a clever postmodern novel with a 'true' story hidden behind the one we're given. Now I know that Zembla is real and John Shade failed its people.

The novelization of Star Wars Episode III by Matthew Stover, no, hang on, I'm serious here. The movie is...at best kind of a clunker, with long dull walk-and-talks and some really anodyne action scenes breaking up the genuinely good stuff. But the book is a pulp-art masterpiece; it hits all the same beats, uses all the same characters, and yet it really sings. It's got this vitality to it. It's brutal, it's funny, it's mythic. How'd he do that? I want to figure that out. I haven't, but I want to.

The Monster Baru Cormorant is the story of Agonist — Baru Cormorant as one of the secret rulers behind the Imperial Throne. She has the power to overthrow the empire that colonized her home. But what did getting that power cost her? She betrayed so many people — knowing that's possible, that level of deceit, can she ever bring herself to trust anyone again? Can she think of herself as worthy of love, or happiness? Is she going to be alone forever? Can you be alone forever?

Fiction is full of these characters who scheme and manipulate. If you're not a sociopath (Baru's not) I think that would be really depressing, really lonely...I wanted to write a character who ran face-first into that wall. You can't just go on being cruel to yourself, being alone, utterly devoted to your purpose. You've got to have something for yourself.

Anyway: Baru is one of the secret rulers of the world, war is looming, she's been given a quest to find the secret of immortality, her brain damage is making her hallucinate, and she's afraid her whole life has been manipulated by the man who made her. And, as ever, she's deep within an empire she secretly wants to overthrow and destroy. She has a lot on her plate. And she can't even see the whole plate! Because she has hemineglect. Poor woman.